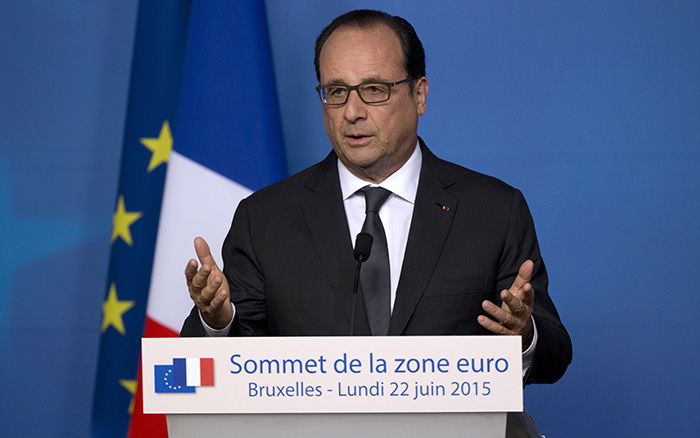 French President Francois Hollande speaks during a media conference at an EU summit in Brussels. (AP Photo)
by Compiled from Wire Services Jun 24, 2015 12:00 am
The French presidency said on Wednesday it "will not tolerate any acts that threaten its security" after leaked documents apparently showed the United States spied on President Francois Hollande and his two predecessors.

Ambassador Jane Hartley is expected to appear at the ministry Wednesday afternoon, according to a French diplomatic official. The official was not authorized to be publicly named.

Meanwhile, parliamentary sources have reported that Hollande is expected to meet the U.S. President Barack Obama on Wednesday afternoon.

"Commitments were made by the US authorities," the Elysee Palace said in a statement, referring to promises by the US in late 2013 not to spy on France's leaders. "They must be remembered and strictly respected."

The White House Tuesday insisted it is not targeting French President Francois Hollande's communications and will not do so, after documents released by WikiLeaks showed the United States wiretapped three French leaders, including him.

"We are not targeting and will not target the communications of President Hollande," said National Security Council spokesman Ned Price, without addressing what might have been done in the past.

According to the documents obtained by WikiLeaks and published on Tuesday by the left-aligned French daily Libération and Mediapart, the NSA spied on three successive French presidents between 2006 and May 2012: Jacques Chirac, Nicolas Sarkozy and François Hollande.