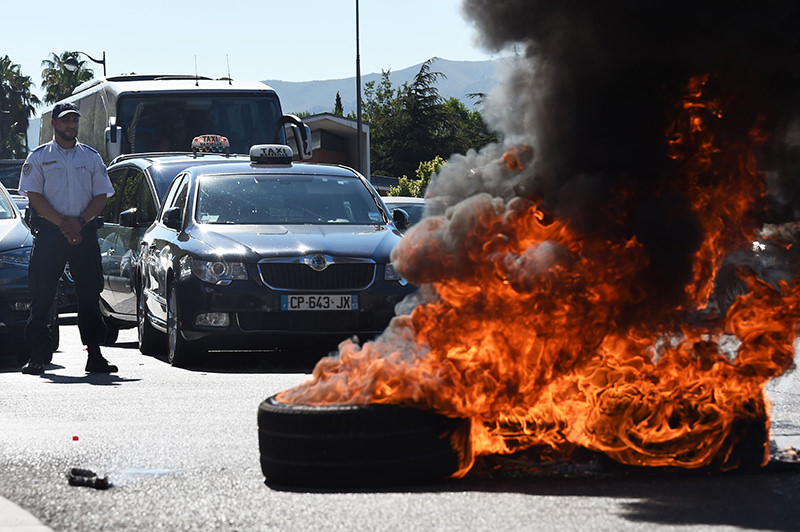 French Taxi drivers burn tires as they protest in the southern city of Marseille on June 25, 2015 as they demonstrate against UberPOP, a popular taxi app that is facing fierce opposition from traditional cabs. (AFP Photo)
by Compiled from Wire Services Jun 25, 2015 12:00 am
Furious taxi drivers in France are staging a one-day nationwide strike over the UberPop transport application, blocking access to Paris airports and major highways around the capital.

French taxis are on strike around the country, snarling traffic in major cities and slowing access to Paris' Charles de Gaulle airport after weeks of rising and sometimes violent tensions over Uber.

Uber, which links drivers with passengers through a smartphone app, has been expanding its UberPOP service in French cities, provoking anger from taxi drivers who see it as unfair competition.

"We are faced with permanent provocation (from Uber) to which there can only be one response: total firmness in the systematic seizure of offending vehicles," G7 taxi firm head Serge Metz told BFM TV.

"We are truly sorry to have to hold clients and drivers hostage. We're not doing this lightly."

UberPOP has been present in Paris since 2011 and has expanded to other cities, but faces a legal battle.

"We must put an end to the anarchy, we must respect the law and suspend the UberPop application," the general manager of Les Taxis Bleus company told French TV channel LCI.

The low-cost "carpooling" app puts members of the public in touch with others who want to offer ride-sharing, reducing each person's travel expenses. The company says it has more than a million users in France.

French media broadcast footage of taxi drivers burning tires to block parts of major roads into the French capital and clashing with other drivers.