Greece fails to reach agreement with creditors ahead of eurozone meeting 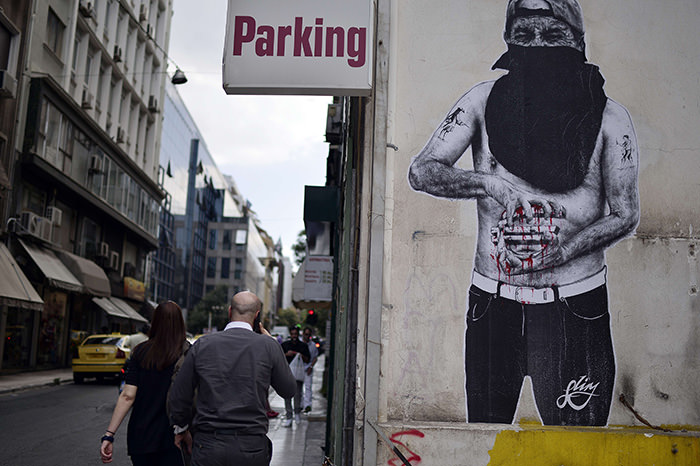 People walk past a mural depicting a person holding a bleeding Euro sign in central Athens on June 25, 2015 (AFP Photo)
by Daily Sabah with Agencies Jun 25, 2015 12:00 am
Greece has not reached a deal with its creditors ahead of a eurozone meeting that will discuss possible options on the bailout, which needs to prevent the country from defaulting on its debts, chairman of the Eurogroup, Jeroen Dissselbloem said on Thursday.

"Regrettably ... too little progress has been made. No agreement is in sight," said Dijsselbloem, and added that the ministers left it up to Greece to make new proposals as the talks between Greece Prime Minister Alexis Tsipras and his country's creditors lacked compromise.

Greece's three creditor institutions unanimously agreed on a set of documents that were sent to finance chiefs to review as the basis for a deal, even though Greece didn't accept them, according to European Union official. Greece submitted its own proposals, a Greek government official said.

"If this paper isn't acceptable to finance ministers then we will have to think about preparing alternatives," Austrian Finance Minister Hans Joerg Schelling told reporters in Brussels on Thursday. "As always I'm confident that there will be a deal, but it's becoming more and more difficult with the passing of each minute."

Greece needs more loans from its creditors before June 30, when its bailout programme expires and it is scheduled to make a debt repayment worth about $1.8 bn to the International Monetary Fund (IMF). The creditors want Greece to make economic reforms but Athens is baulking.

On the eve of the Luxembourg talks, Alexis Tsipras, Greek prime minister, described demands by the country's rescue lenders to slash pensions "incomprehensible".

EU officials said they had already lowered their demands for a primary budget surplus this year from three percent to one percent and agreed to make the increase in the surplus over the next years more gradual. A primary surplus is how much a government earns when not counting the costs of interest payments on debt.

If Greece ends up defaulting on its debt, the bankruptcy procedure is expected to prompt the country's messy exit from the Eurozone and even the European Union.

Officials acknowledged that a so-called "Grexit" was now being discussed and that contingency plans were being made. As fears of a potential Grexit have swelled, there have been signs that Greeks are withdrawing money from their banks in ever-increasing amounts.
Last Update: Jun 25, 2015 2:58 pm
RELATED TOPICS