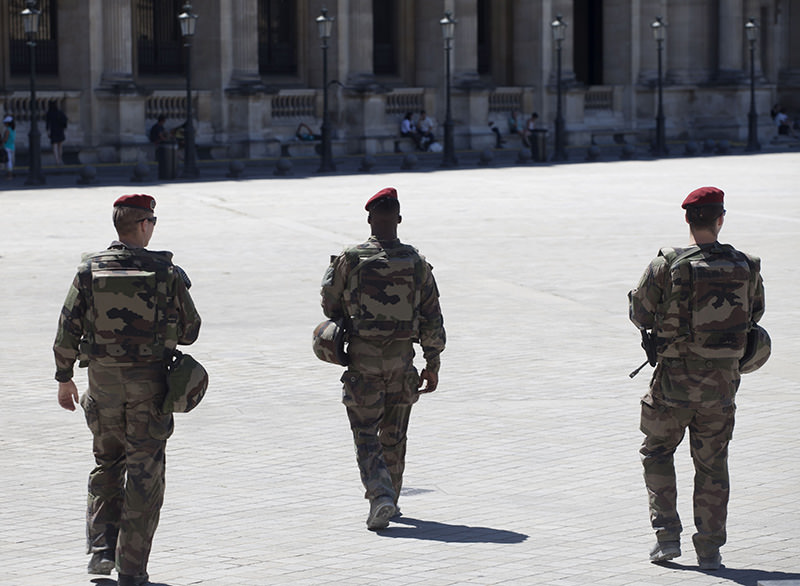 French soldiers, on patrol as part of the national security alert system, walk across the courtyard of the Louvre in Paris on June 30, 2015 (AFP Photo)
by Anadolu Agency Jul 02, 2015 12:00 am
Two French special forces soldiers were arrested on Thursday on suspicion of sexually abusing children while on operations in West Africa, local media said.

The soldiers, part of an anti-terrorism mission to Burkina Faso, were arrested on their arrival in Paris, Le Figaro newspaper reported.

They are accused of assaulting two sisters girls aged three and five at a hotel swimming pool in capital Ouagadougou on Sunday.

The Ministry of Defense had previously announced the soldiers' suspension and the Paris prosecutor has launched a preliminary inquiry.

"Two French soldiers on mission in Burkina Faso were suspected of engaging in acts of a sexual nature with two children," the ministry said in a statement.

The Burkina Faso government and prosecutors in Ouagadougou have launched their own investigation. "The charges against the two French soldiers are serious. Ouagadougou will not keep silent," a senior Burkina Faso official told the Anadolu Agency on Wednesday on condition of anonymity.

The arrests follow an alleged child sex abuse scandal involving French UN troops in the Central African Republic between late 2013 and mid-2014, which is being investigated by French prosecutors.

Around 220 French soldiers are currently deployed in Burkina Faso as part of an anti-terrorism operation that also includes French military deployments in Mauritania, Mali, Niger and Chad.