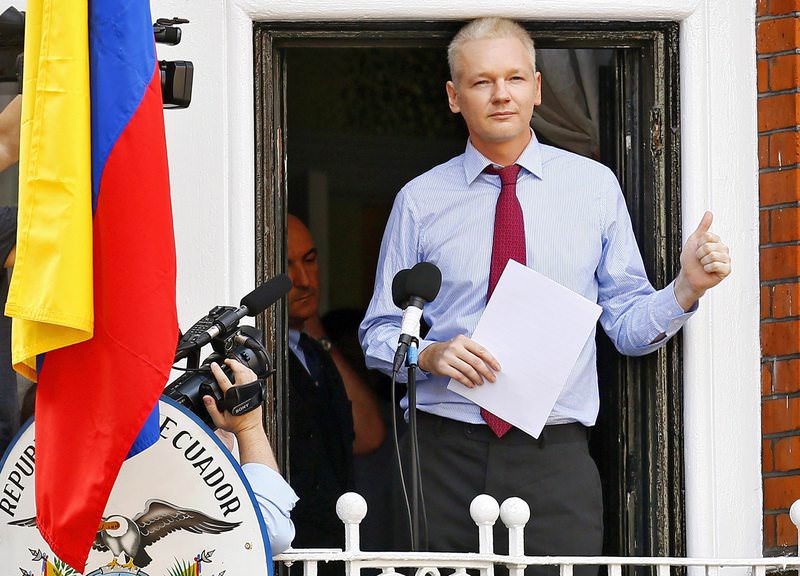 A file picture dated 19 August 2012 of Wikileaks founder Julian Assange giving a thumbs up prior to delivering a statement on the balcony inside the Ecuador Embassy where he has sought political asylum in London (EPA Photo)
by Compiled from Wire Services Jul 03, 2015 12:00 am
The French government rejected an aslyum request from Wikileaks' Julian Assange on Friday, saying he did not face "immediate danger".

Assange has been living for the past three years in Ecuador's London embassy, where he took refuge to avoid extradition to Sweden over alleged sex crimes.

"France has received the letter from Mr. Assange. An in-depth review shows that in view of the legal and material elements of Mr Assange's situation, France cannot grant his request," a statement by President Francois Hollande's office said.

"The situation of Mr. Assange does not present any immediate danger. He is also the target of a European arrest mandate," it noted.

Le Monde daily earlier published an open letter by Assange to Hollande saying his life was in danger.

Assange wrote in the letter that his youngest child is French, and so is the child's mother. "I haven't been able to see them in five years, since the political persecution against me started," he said.

He added that he was "very touched" that French Justice Minister Christiane Taubira had called for France to grant him asylum.

WikiLeaks' publication of classified military and diplomatic documents five years ago infuriated Washington and, critics say, damaged U.S. security and put lives at risk. Its supporters say it exposed government secrets that the public had a right to know.