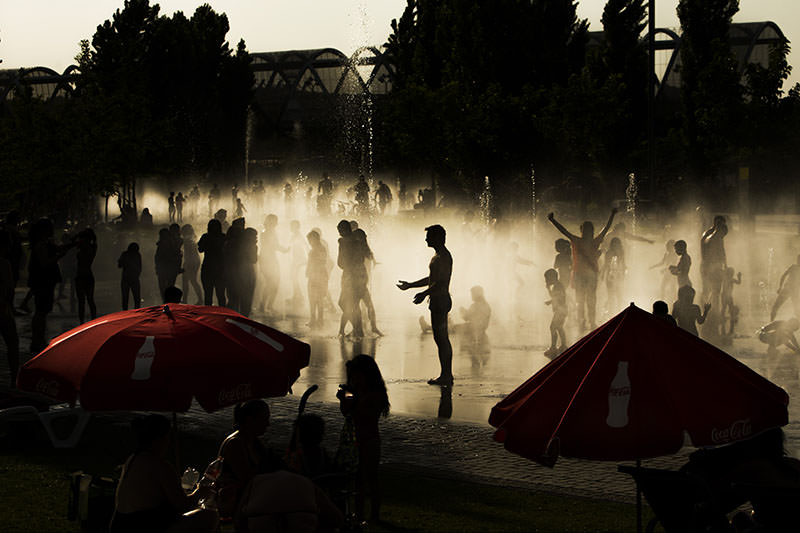 People cool down in a fountain beside Manzanares river in Madrid, Spain, Tuesday, June 30, 2015 (AP Photo)
by Jul 04, 2015 12:00 am
A leading German weather researcher said on Saturday that, thanks to climate change, extremes of heat are now much more common, as the mercury pushed towards a new German record high.

Temperatures were hovering around 40 degrees Celsius in parts of Germany on Saturday, just short of the 40.2-degree record last reached in 2003, after being 14 degrees just a few days before.

Meteorologist Stefan Rahmstorf, who does research for the Potsdam Institute for Research into the Consequences of Climate near Berlin, said that swings in temperature were normal, but there was "a gradual long-term global warming trend that makes it more likely and more frequent that heat waves occur."

"We are already noticing that heat records occur twice as often as cold records in the daily temperatures in Europe," Rahmstorf said.

"And for longer periods the relationship is much starker: In the monthly values we have five times as many heat records as would be the case for a stable climate.

"And this development will continue as we are still heating the atmosphere with our greenhouse gases," he said.

Rahmstorf, a 55-year-old professor of ocean physics at Potsdam University, said there had been a constant warming trend since 1980 and that the statistics showed that there has been an increase in periods of extreme heat since then.

He said it was up to humans to act as it has been scientifically proved that we have caused the warming. The proposed limit of a 2-degree increase in average global temperatures compared to 1990 will be discussed in December in Paris at a global climate summit.

"Hopes are high that there will be a climate agreement that will bring about a reversal," said Rahmstorf, whose published books include one on climate change and one on the environmental threats to the oceans.

Asked what his reaction was to the current heat wave in Germany, Rahmstorf said he was going to go swimming with his son.
Last Update: Jul 04, 2015 6:14 pm
RELATED TOPICS