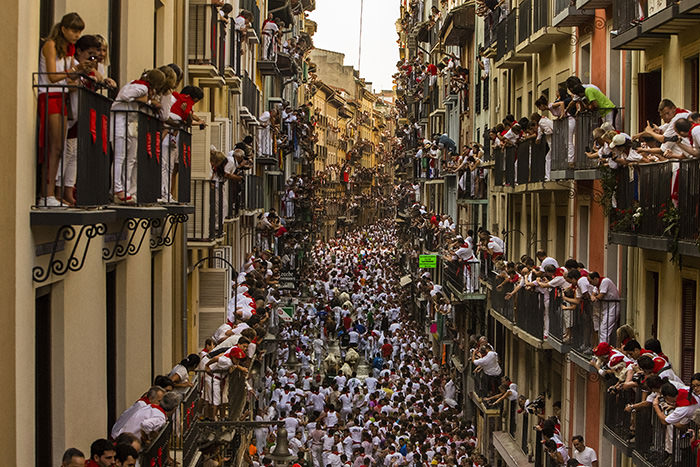 People watch as Jandilla fighting bulls and revelers run during the running of the bulls at the San Fermin festival in Pamplona, Spain, Tuesday, July 7, 2015 (AP Photo)
by Jul 07, 2015 12:00 am
Three men were gored and 10 others taken to hospital on the first day of Pamplona's week-long San Fermin festival in the northern Spanish city where bulls chase runners in red scarves through the streets.

Tuesday's run included six bulls from the Jandilla ranch in the rural western region of Extremadura, known for the ferocity of its bulls.

The run lasted 2 minutes and 23 seconds. One man was gored in the chest and was in a stable condition, a doctor at the event said. The Red Cross said two other men were gored, one in the back, but gave no further details.

Many Spanish towns hold festivals involving bulls during the summer. San Fermin is the most famous internationally and attracts thousands of revellers, many from abroad.

San Fermin featured in Ernest Hemingway's novel "The Sun Also Rises". Its daily bull run starts at 8 a.m. and usually lasts between 3 and 5 minutes. There are eight runs in total.