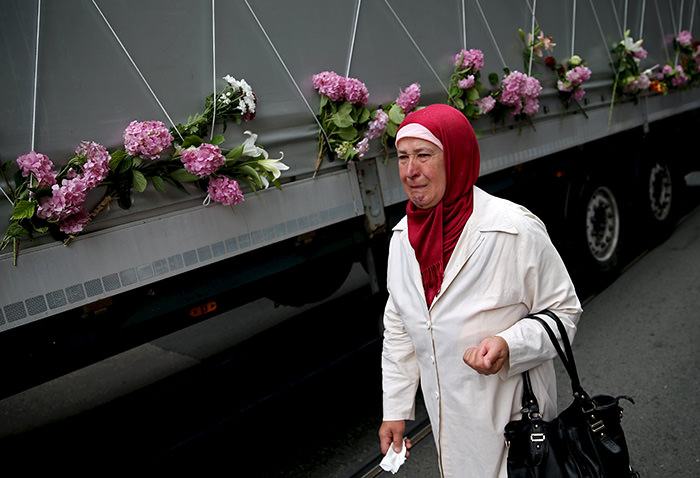 A woman cries near a truck carrying 136 coffins of newly identified victims of the 1995 Srebrenica massacre, in front of the presidential building in Sarajevo July 9, 2015 (AA Photo)
by Anadolu Agency Jul 09, 2015 12:00 am
The remains of 136 Srebrenica genocide victims were moved aboard a truck laden with flowers from the Bosnian city of Visoko on Thursday morning for its final journey to a cemetery in eastern Bosnia-Herzegovina.

The victims will be buried in Potocari village, just northwest to Srebrenica town, on July 11 to mark the 20th anniversary of the genocide.

A large number of people had participated at a ceremony in Visoko city to bid an emotional farewell to the victims.

Azmir Hodzic from Srebrenica town, who lost his father, grandfather, nephews and many other close family members in the genocide, was one of the people who attended the ceremony.

"I am feeling very sad today. This cannot be forgotten?some people must stop denying that it was an act of genocide," Hodzic said.

The blue truck carrying the coffins is covered with a large flag of Bosnia-Herzegovina. As it passed by the streets of the capital Sarajevo, many people from all walks of life, including women and children could be seen openly crying. Several people also showered the truck with flowers and raised the palms of their hands close to their faces to pray for the victims.

Jusuf Memisevic, the truck's driver, told Anadolu Agency that his hands and heart were heavy as he helped the genocide victims reach their final destination. "It is one of the most challenging thing in my life. It is very difficult. The victims of the genocide are always in my mind, even when I am talking to you," Memisevic said.

The convoy is expected to arrive at the Potocari Memorial later Thursday.

Despite the fact that 20 years have passed since the Srebrenica genocide, the remains of victims are still being discovered and funeral ceremonies are still being carried out in Bosnia-Herzegovina.

Srebrenica was besieged by Serb forces between 1992 and 1995 during the Bosnian War. Back then, Serb militias were trying to wrest territory from Bosnian Muslims and Croats to form their own state.

The UN Security Council declared Srebrenica a "safe area" in the spring of 1993. However, Serb troops led by General Ratko Mladic-who now faces genocide charges in The Hague-overran the UN zone despite the presence of around 450 Dutch soldiers tasked with acting as UN peacekeepers.

The Dutch troops failed to act as Serb forces occupied the area, killing about 2,000 men and boys on July 11 alone.

Some 15,000 Srebrenica men fled into the surrounding mountains but Serb troops hunted down and slaughtered 6,000 of them in the forests.
Last Update: Jul 09, 2015 2:46 pm
RELATED TOPICS