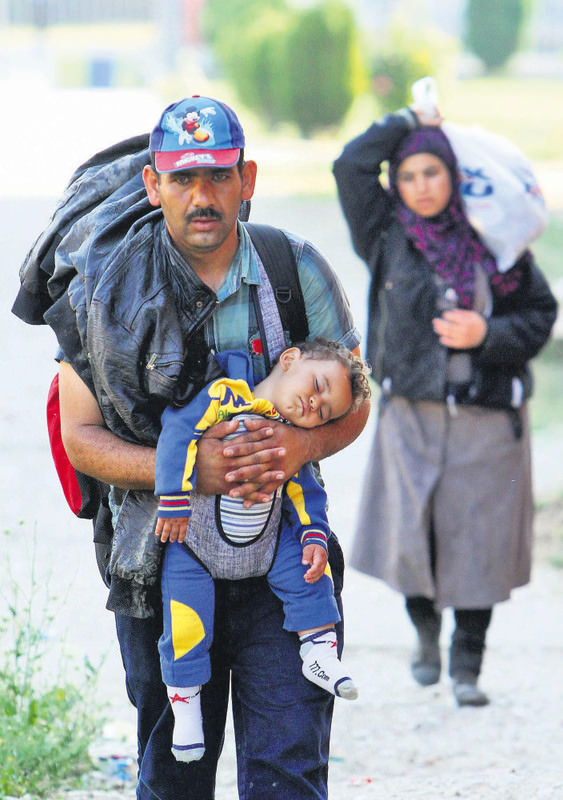 The EU is seeking a solid solution while the number of migrants, flowing to Europe continues to increase. Howewer, some members like France and the U.K. reject the proposal quota system while others like Hungary are reluctant to accept refugees

The number of migrants seeking protection in the European Union soared by 68 percent in the first five months of 2015 compared with the year-earlier period, the EU said on Wednesday at a time of haggling between member states over how to share the burden. EU ministers responsible for migrant issues will meet on Thursday to weigh details of a plan aimed at deterring migrants from making dangerous sea crossings to Europe while helping Mediterranean EU countries, especially Italy and Greece, bearing the brunt of the influx and struggling to cope. Member states have rejected a mandatory scheme to share migrants proposed by the European Commission, the EU executive, and are negotiating on voluntary commitments. "The work is still ongoing," a diplomat told Reuters on Wednesday.

The European Asylum Support Office (EASO) gave no figure for the number of arriving migrants in the January-May 2015 period. But the U.N. High Commissioner for Refugees said earlier that more than 135,000 migrants had arrived in Europe by sea in the first half of 2015, mostly landing in Greece and Italy. EASO said that the full-year 2014 figure was already a record with more than 660,000 migrants seeking asylum in the EU's 28 countries plus Switzerland and Norway. Many asylum seekers pitch up on the southern shores of Europe after risking their lives in overloaded boats dispatched by human traffickers dispatched across the Mediterranean. Migrants come mainly from African and Middle Eastern countries plagued by conflict, human rights abuses and poverty.

In June, EU leaders endorsed ways to counter the migration crisis in the Mediterranean by sharing 60,000 refugees and asylum seekers over the next two years, but failed to decide precise national commitments to take people in. According to the plan to be considered at the meeting in Luxembourg on Thursday, 20,000 refugees would be resettled in Europe directly from their countries of origin or transit, such as Syrians escaping war or displaced in Lebanon or Jordan. Another 40,000 asylum seekers now in Italy and Greece would be transferred to other EU countries. Some EU countries have made informal pledges to host migrants but an agreement on how to share out 60,000 migrants remains elusive. Ministers are aiming for a deal by the end of July to allow the plan to run from September. In preparatory meetings, diplomats agreed to include Iraqis among the nationalities that would benefit from the relocation plan, diplomats said. The criteria initially set concerned only Syrians and Eritreans.

In Italy, nearly 68,000 migrants have landed this year, according to the International Organization for Migration (IOM) and in Greece, at least 61,474 refugees arrived on the Greek islands between Jan. 1 and June 22, 2015, Amnesty International reported. The number is far greater than the amount that arrived in the whole of 2014 when 43,500 refugees arrived in Greece.

About 2,900 immigrants were rescued in one day from the central Mediterranean in one of the biggest single-day tallies since Italy began experiencing a record influx of refugees and asylum seekers from North Africa. The Italian Coast Guard said it coordinated 21 rescue operations on Sunday that also involved the Italian Navy and tax police as well as Spanish, British and Irish navy vessels and the private Malta-based rescue mission Migrant Offshore Aid Station. For 2015, Italian authorities foresee at least 200,000 arrivals. The surge in numbers since the start of 2014 has put Italy's reception facilities under severe strain. Italy currently provides housing for around 80,000 asylum-seekers and others seeking leaves to remain in the country. The situation is likely to get worse over the summer, when the numbers of boats dispatched by people smugglers usually peaks. Of last year's arrivals, some 100,000 arrived between June and September. This year has also seen a sharp increase in the numbers of migrants dying during the crossings with over 1,800 fatalities reported en route to Italy and at least 27 off Greece, according to the OIM.

In a bid to issue a solid response to a global refugee crisis, European leaders agreed to a voluntary scheme aimed at relocating 40,000 migrants arriving in Italy and Greece among the 28-nation EU bloc to ease the load on the two southern European nations, and resettling an additional 20,000 refugees mainly coming from Syria and Iraq. The EU quota plan addresses the distribution of refugees rescued while trying to cross the Mediterranean. The plan is bound by complex rules: National economic output, population, unemployment rates and the number of refugees already admitted to an individual country. The quotas by percentage of the total number of people rescued, have been opposed by many European countries, saying that they have already been contending with thousands of refugees. The UK and France have rejected the system.

However, EU cannot handle the crisis as its members do not accept the offered solutions. Despite the regulations some EU members like Hungary and Bulgaria have declared that they would not accept refugees. Moreover, Bulgaria has built fence near Turkish border while the Hungarian parliament approved a bill last week, allowing the build of a fence in country's south to prevent migrants from entering. As part of an increasingly extreme reaction to the EU migrant crisis, Hungary stopped accepting asylum seekers from other EU states "indefinitely," defying European authorities. Struggling with a massive flow of illegal migrants from neighboring Serbia, the Hungarian government stated that illegal migrants residing in Austria or other member states should be sent back to where they first entered the EU. Such a move is considered a violation of the EU's Dublin Regulation, as the European Commission urged the Hungarian government to make "an immediate clarification" over the suspension of a key asylum rule. Austria reacted to Hungary's anti-migrant decision, calling it "unacceptable."

Under the Dublin Regulation, which entered into force in July 2013, a member state can be held responsible only when the applicant first lodged his or her application for international protection, as stated in Article 7. As some EU countries -- Austria, Germany and the Czech Republic -- can return asylum seekers to Hungary to process their application, Hungarian authorities stated that Hungary is not the first country for asylum seekers as "an asylum-seeker coming from Syria or Afghanistan filing an application in Hungary must have crossed the borders of at least four states, likewise illegally, before submitting his or her application to the Hungarian immigration authority." However, according to the Article 18 of the Dublin Regulation, EU member states are obliged to "take charge ... of an applicant who has lodged an application in a different member state" and "take back ... an applicant whose application is under examination and who made an application in another member state or who is on the territory of another member state without a residence document."
Last Update: Jul 09, 2015 8:04 pm
RELATED TOPICS