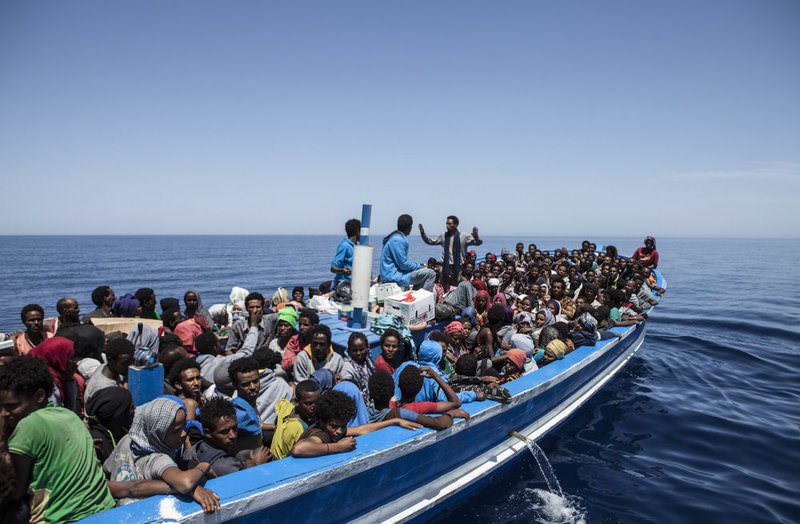 This photo taken on May 3, 2015 and released by the MOAS (Migrant Offshore Aid Station) shows migrants aboard a wooden boat on the Mediterranean Sea.
by Daily Sabah with AFP Jul 12, 2015 12:00 am

As the massive numbers of migrants and refugees try to get to Europe, the IOM announced 150,000 have arrived while more than 1,900 migrants have died in the Mediterranean

Some 150,000 migrants and refugees have reached Europe so far in 2015 and more than 1,900 of them have died, the International Organization for Migration (IOM) said in a report released on Friday. Nearly all of the people who have crossed the Mediterranean so far this year have landed in Italy, which has counted around 75,000 arrivals and in Greece, with roughly equal numbers as Italy.The IOM's announcement came just a month after the 100,000-mark was passed, and the United Nations warned the surge in arrivals was creating humanitarian crises that required a "collective and far-reaching" European response.

As Europe grapples with how to handle the massive numbers who make it to its shores, IOM spokesman Joel Millman pointed out that 1,914 people had died in the central Mediterranean as they crossed from Libya to Italy or Malta this year. "That is about double last year's pace," he said, lamenting that this past week had been particularly deadly. Overnight to Friday alone, the Italian coastguard said it had rescued 823 migrants in eight different operations, and had pulled 12 bodies from the water. Millman said IOM had heard of at least four other occasions this week when bodies had been found. On Monday, July 6, IOM learned that the remains of five migrants, who were believed to have departed from Libya, were discovered in waters off Tunisia. On Tuesday, July 7, four migrants died, while at least 15 others were reported missing in the Aegean Sea, after a boat carrying migrants sank in waters between Turkey and the Greek islands of Farmakonis and Agathonisi, according to Greek authorities. Four more bodies were discovered off Tunisia on Thursday, July 9, IOM said.

The report also pointed out that Greece is now the largest arrival point amid one of its worst economic crises. Until 2015, the rise in Mediterranean Sea arrivals was seen primarily in Italy. Over the course of 2014, it received over three quarters of all arrivals by sea (170,000). During all of last year, 34,442 people arrived in Greece, less than one fifth of the total number of arrivals but in 2015, that picture changed. During the first six months of 2015, 70,354 people arrived in Italy, while 69,000 arrived on the Greek islands – more than the number for whole of 2014. So far this year, more than 77,000 people have landed on Greek shores, according to the U.N. refugee agency, which on Friday warned the country was facing a "growing humanitarian crisis". "Greece is now the largest arrival point, putting a huge strain on the country as it wrestles with one of its worst economic crises in decades," Millman said, adding that most of them were fleeing from war-ravaged Syria.

"The numbers of people arriving are now so high that despite all efforts, the authorities and local communities can no longer cope," he warned, insisting an "urgent response from Europe is needed before the situation deteriorates further." "Greece urgently needs help and we expect Europe to step forward," he said. EU leaders agreed last month to redistribute 40,000 Syrian and Eritrean asylum-seekers already in Europe to help take the load off countries like Greece and Italy, but on a voluntary basis after many member states objected strongly to proposed mandatory quotas. Nearly all of the migrants and refugees who arrive in Greece, where the reception capacity is "completely overwhelmed", move on, trying to reach western and northern Europe by passing through the western Balkans region. Spindler said that in June, the number of people crossing from Greece into Macedonia and Serbia had soared to an average of 1,000 per day. "The capacity of these countries to effectively respond to the emergency situation is severely overstretched," he said, insisting though that "the tightening of borders and building of walls (as Hungary is planning to do) are not the solution."

"We would expect the European Union to activate its emergency response, because Greece is part of the European Union, and this is happening in Europe. It is happening on the doorstep of Europe," Spindler said, also demanding more assistance to countries in the "immediate EU neighborhood" like Macedonia and Serbia. The top five countries of origin for Italy-bound migrants were Eritrea, Nigeria, Somalia, Syria and Gambia, whereas for Greece they were Syria, Afghanistan, Pakistan, Iraq and Somalia, IOM said. The arrival in Europe of 150,000 migrants is a substantial number, but cannot be described as "an invasion," considering that Europe is home to over 500 million people, according to Soda. "Lebanon, a country of 4 million people, is hosting 1.5 million Syrian refugees and Turkey is hosting about 2 million," he notes.
Last Update: Jul 12, 2015 7:50 pm
RELATED TOPICS