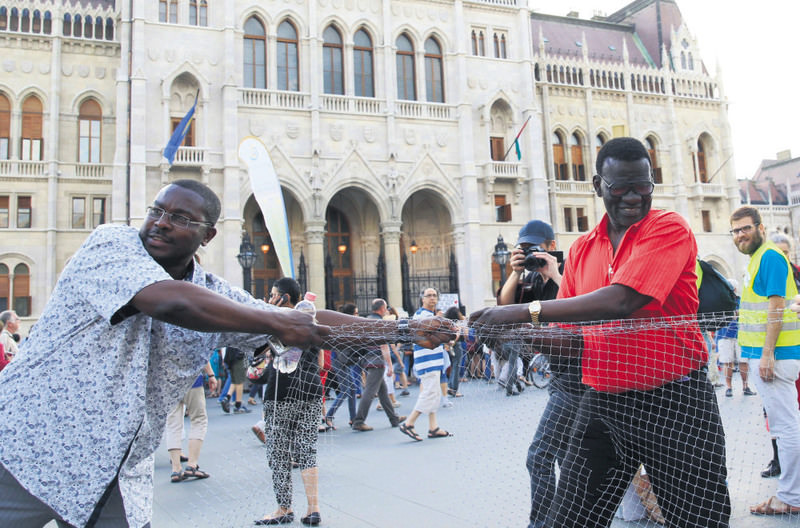 People tear apart a net symbolizing a fence during a demonstration against a fence being built along the Hungarian-Serbian border, in Budapest, Hungary
by Daily Sabah with Wires Jul 15, 2015 12:00 am

Hungary began building a fence along its border with Serbia on Monday to stop the flow of migrants. Soldiers were building a 150-meter-long "model" fence in the town of Morahalom, which leads to the Serbian town of Subotica, the Interior Ministry announced. Prime Minister Viktor Orban's right-wing government eventually plans to build a 4-meter-high barricade along the entire 175-kilometer-long Hungary-Serbia border.

Protesters on Tuesday called on the Hungarian government to abandon the construction of an anti-immigrant fence on the border with Serbia and provide more support to refugees seeking asylum in the European Union. About 800 people took part in the protest, some breaking through a makeshift barrier set up outside parliament as a symbol of their opposition to the fence.

Activist Amy Rodgers from MigSzol, an organization that assists migrants and refugees, asked the Hungarian government to open more refugee camps and the EU to create legal ways for refugees to reach Europe. She also criticized the government for its anti-immigrant billboard campaign, which has slogans like, "If you come to Hungary, you cannot take Hungarians' jobs."

"In the middle of the biggest refugee crisis in recorded history, this government has somehow managed to make it sound like they are the ones with the problem," Rodgers said, who also highlighted how Hungarian volunteers were helping migrants. "In order for this continent to start looking a bit more humane we need many, many things. The one thing we definitely don't need is a fence."

Hungary has for weeks been threatening to seal its border with Serbia and says it is unable to cope with the influx of migrants transiting from the Middle East and Africa. The country is in the EU's passport-free Schengen zone, which means that once migrants are inside the country, they can travel freely elsewhere. The migrants, among them children, hike for weeks trying to cross Macedonia and Serbia. Most are from Syria, Iraq, Afghanistan and the African trouble spots of Eritrea and Somalia. But Serbia and Macedonia are not the target destinations for migrants, who are finding their way to wealthy countries such as Germany. Many of them enter the Balkans via EU member Greece and after hiking across Macedonia and Serbia intend to cross back into the European Union through Hungary.

According to EU rules, asylum seekers have to wait for the resolution of their status in the country that first registered them, which is often Hungary. Amnesty International said last week that more than 42,000 people entered Hungary without documents from Serbia. The vast majority arrived from Macedonia, which they reached via Greece.

By June 22, Hungary had already registered more than 60,000 migrants, prompting the country's right-wing government to respond with the plan to build a fence along its border with Serbia.

Orban said last month: "We will consider every possibility, even to physically seal the border. We don't think it is fair of Serbia to send the refugees to us, they should stop them on their soil."

Around 80,000 migrants and refugees have reached Hungary so far this year, with around 800 to 1,000 arriving daily in recent weeks. Most request asylum but leave for richer EU countries before their claims are settled. Prime Minister Viktor Orban's government is staunchly opposed to immigration from outside Europe, and he has said that Europe's Christian identity is at risk from the large number of migrants.

The United Nations and the Council of Europe have criticized changes to Hungary's asylum laws, saying they would harm asylum-seekers' right to seek safety there and put them at risk.
Last Update: Jul 15, 2015 11:59 pm
RELATED TOPICS