UN: Up to 1.3 million lack access to water in Ukraine 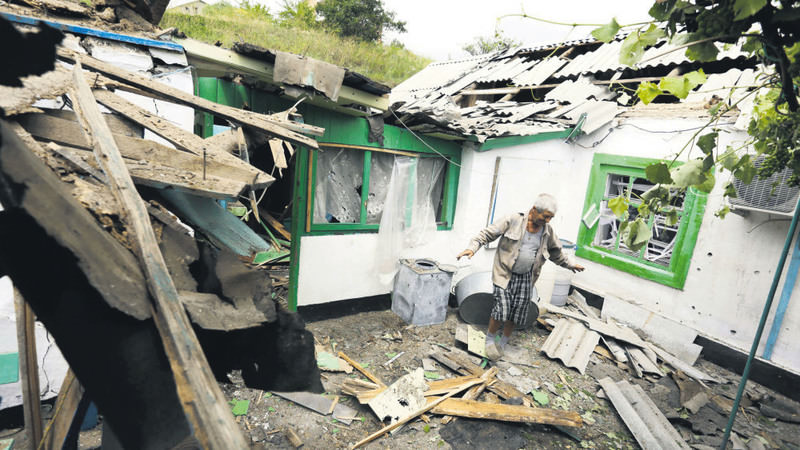 by Daily Sabah with Wires Jul 15, 2015 12:00 am
Up to 1.3 million people in conflict-affected areas in eastern Ukraine are facing acute water shortages and a serious water crisis due to damaged or destroyed infrastructure, the United Nations children's agency UNICEF said on Tuesday.

Many in the Luhansk region have to rely on water trucks or travel to neighboring villages to get water. In Mariupol, a city of 500,000 in the Donetsk region, they rely on water from a "rapidly depleting" reservoir, UNICEF said. It added more than 470,000 people, including 118,000 children, faced a serious water crisis in Luhansk region alone, due to destroyed water lines or acute water shortages. "Water is one of the most acute needs of children and adults in eastern Ukraine," Giovanna Barberis, UNICEF representative to Ukraine, said in a statement.

"No children and families should have to risk their lives in order to access one of life's basic necessities for survival." With little rain and high temperatures, conditions are becoming increasingly difficult. The risk of waterborne diseases is also rising as people are unable to store and transport water safely, UNICEF said.

UNICEF said more humanitarian partners are needed for the emergency water and sanitation response. The agency and its partners have been supplying water to some 550,000 residents in the region since January. Almost 1.4 million people have been displaced within Ukraine since the conflict between Ukrainian government forces and pro-Russian separatists began in March 2014. More than 5 million people are in need of humanitarian assistance, including 1.7 million children, said UNICEF. The agency said it received only 19 percent of its appeal for $55.8 million to meet the urgent humanitarian needs of children and families in the region this year. More than 6,500 people have lost their lives in the conflict between Ukrainian forces and pro-Russian separatists since April 2014, according to the UN.

Robert McCarthy, UNICEF's Regional Chief of Emergency for Central and Eastern Europe and the Commonwealth of Independent States (CIS), warned that the risk of "waterborne disease is likely to increase as people are unable to store or transport water safely". He also said humanitarian actions should be strengthened to reduce the impact of violence and displacement on children.

In May, the Turkish Cooperation and Coordination Agency, or TIKA, delivered humanitarian aid to those living in eastern Ukraine's Luhansk region. The nearly 20-ton aid package consisted of food, cleaning products and other materials.

Meanwhile, a Ukrainian military spokesman said Wednesday that eight Ukrainian troops have been killed and 16 wounded in the past 24 hours in the war-torn east, as pro-Russian rebels launched one of their fiercest attacks since the signing of a shaky ceasefire deal, Kiev security officials said on Wednesday. The death toll released by the National Security and Defense Council on Wednesday is the highest in weeks, pointing to intensifying fighting in the area. It includes five Ukrainian servicemen killed by a land mine in the Luhansk region.

Since the conflict between Ukrainian government forces and pro-Russian separatists began in March 2014, more than 6,500 people have been reportedly killed and at least 12,235 injured, according to U.N. figures.
Last Update: Jul 15, 2015 10:33 pm
RELATED TOPICS