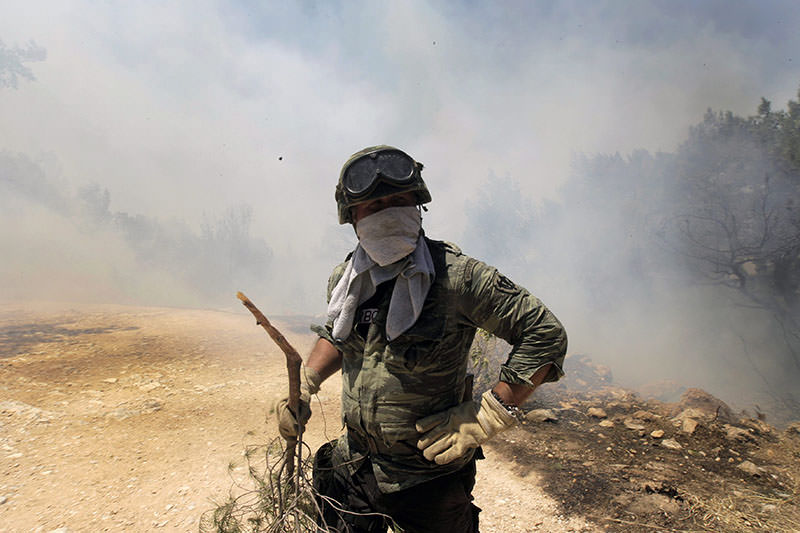 A soldier tries to extinguish a fire in Karea, suburb of Athens, Greece 17 July 2015. Several wildfires have been raging in Greece due to strong winds (EPA Photo)
by Associated Press Jul 17, 2015 12:00 am
Greek firefighters battled large fires in the south, on the outskirts of Athens and on an island near the capital Friday as flames fed by strong winds forced the evacuation of villages and summer camps. About 200 people trapped by one fire were plucked off a beach by rescue boats.

In all, firefighters were battling 59 fire fronts, mainly in southern Greece and near the capital.

Prime Minister Alexis Tsipras said Greece had requested help from his country's army and air force, as well as the European emergency response center, to fight the blazes.

Defense Minister Panos Kammenos said it was likely that at least some of the fires were the result of arson, and ordered the armed forces to patrol forests and woodlands across the country as a preventative measure.

"All forces are on alert," Tsipras said, noting that the hot, dry and windy conditions were making firefighting more difficult.

The most severe fire was a massive blaze in the Lakonia area in the Peloponnese, southern Greece, where at least three villages were evacuated.

Rescue boats battled gale-force winds to reach about 200 people who had taken refuge in a bay, ferrying them to safety, the coast guard said. Twelve other people were rescued from a separate beach, it said.

Two helicopters, 120 firefighters and nearly 30 soldiers were fighting the Lakonia blaze, which local media said burned through electric pylons, cutting off electricity to the southern island of Kythira. Two pilots were slightly injured when their firefighting plane had to make an emergency landing.

Another major fire burned across a large swathe of Mount Ymittos on the outskirts of the Greek capital, blanketing parts of southern Athens in smoke and threatening houses in outlying neighborhoods. Strong winds fanned the flames across the mountainside, hampering efforts by water-dropping planes and helicopters that continued flying sorties as night fell.

A third major fire broke out Friday afternoon north of the capital in Malakasa, where more than 120 children were being evacuated from summer camps, mayor Thomas Rousis told state television.

Firefighters were also tackling at least three other blazes, one near Athens, another in the southern area of Argolida in the Peloponnese, and a third on the island of Evia, northwest of the capital.