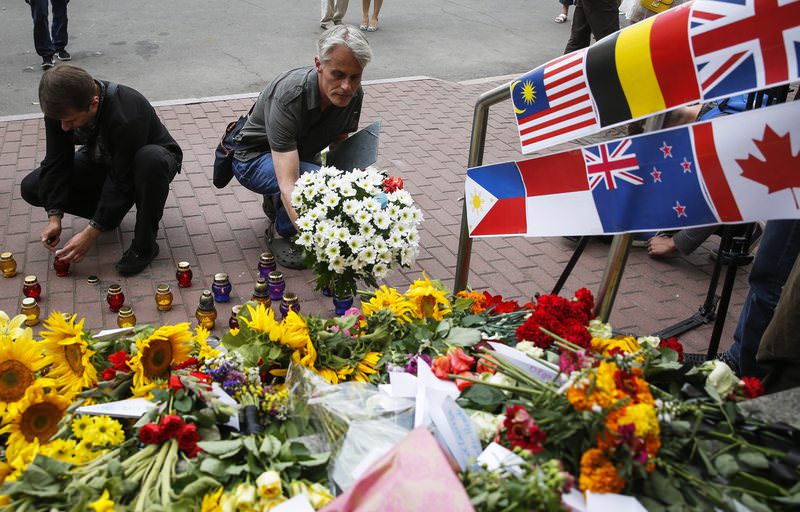 | EPA Photo
by Anadolu Agency Jul 17, 2015 12:00 am
Commemoration services were held in Nieuwegein, Netherlands on Friday for the Dutch victims of the MH17 airliner which was shot down over Ukraine.

Marking the first year anniversary, around 1,300 relatives of the victims, as well as officials including Prime Minister Mark Rutte, attended the service in Nieuwegein, near Utrecht, where the names of the 298 people aboard the Malaysia Airlines flight were read out.

There were also ceremonies in Australia and the village in eastern Ukraine where Flight MH17 was downed. A service was held in Kuala Lumpur on July 11 to avoid the holiday at the end of the Muslim holy month of Ramadan.

"I would like to express to you my heartfelt gratitude," Rutte said, according to a statement released on his office's website. "Because after the grief and the intense sense of loss, the long and complex aftermath is one of the most difficult things to cope with - the recovery of the remains and the wreckage, the investigation into what exactly happened and everything that still needs to be done in order to do right by your loved ones.

"That is what everyone wants, and tens if not hundreds of people are working every day with heart and soul to achieve this."

Flags on government buildings flew at half-mast in memory of the victims, of who 196 were Dutch nationals.

The anniversary came as several countries led by the Netherlands, Malaysia and Australia have called for a UN tribunal to prosecute those suspected of involvement in downing the aircraft as it flew from Amsterdam to Kuala Lumpur.

Separatist rebels backed by Russia are widely believed to have brought down the plane although Russia has insisted it was shot down by Ukrainian government forces. On Thursday, Russia rejected the suggestion of a tribunal.

The Dutch Safety Board, which has been investigating the crash, is to release a final report in October.
Last Update: Jul 17, 2015 11:39 pm
RELATED TOPICS