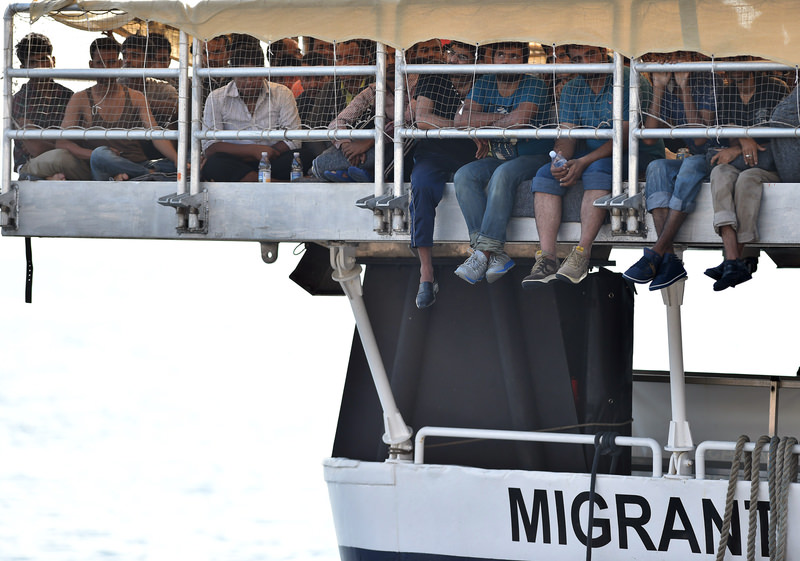 Migrants wait to disembark from the Migrant Offshore Aid Station (MOAS) vessel Phoenix, at the harbor of Messina, Sicily, Italy, Wednesday, July 15, 2015. (AP Photo)
by Jul 18, 2015 12:00 am
A rescue boat with carrying 700 migrants was denied entry to Sicily by Italian authorities who said that there was no room left for the people in the government reception centres, stated a humanitarian group on Friday.

Despite lengthy discussions with Italian authorities the migrants on a boat operated by medical charity Doctors Without Borders, were turned away due to a "lack of capacity in the Italian (migrant) reception system," said a statement from the group.

The boat is now heading for the port of Reggio Calabria on the far southern tip of Italy with hopes to land on early Saturday.

Italy is struggling to host more than 80,000 migrants who have crossed the Mediterranean fleeing war, persecution or poverty in the Middle East and Africa.
Italian authorities gave permission Thursday for some of the migrants on the
Doctors Without Borders (MSF) boat to disembark at the Sicilian town of Trapani, but the charity rejected that idea due to tensions aboard the overcrowded vessel.
In the end just seven people -- all in need of urgent medical attention -- and their families were let off the boat.

The president of MSF's Italian operation, Loris De Filippi, said the "lack of preparation in the Italian system has very concrete consequences that we witness first hand."

"The ministry of interior must authorise boats to disembark at the port in Sicily that is closest to them in order to allow them to return to the search and rescue zone as soon as possible in order save other boats," he added.

The International Organization for Migration said last week that 150,000 migrants and refugees have made the perilous journey across the Mediterranean to Europe so far this year, and more than 1,900 of them have been killed.

On Friday Italian media reported a 10-year-old diabetic girl from Syria died during a hypoglycemic episode while making the crossing after the people smugglers tossed overboard the bag containing her insulin.

The girl, her parents and sisters were among some 300 migrants on an Egyptian fishing boat that was rescued after seven days on the water, according to newspaper Giornale di Sicilia, which cited the statement the child's father made to Italian prosecutors.

The father tried in vain to keep the smugglers from tossing the bag into the water. She died after falling into a coma during the crossing and her body was dumped into the sea.