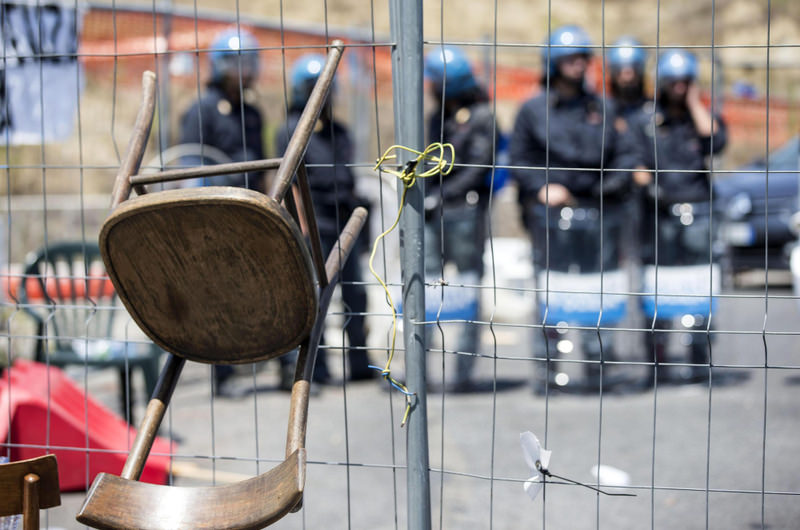 by Daily Sabah with AFP Jul 19, 2015 12:00 am
Residents in a suburb of Rome and a northern Italian village staged angry anti-immigrant protests on Friday with villagers setting mattresses ablaze in a bid to stop authorities from housing migrants. Authorities in the village of Quito plan to accommodate 101 immigrants in empty apartments, but several residents broke into one of the buildings and removed beds, mattresses and televisions intended for the newcomers and set them on fire outside.

The protesters then put up tents, with the Corriere della Sera newspaper quoting them as saying: "We aren't going home until they leave – this is an invasion."

Italy currently has more than 80,000 migrants who have crossed the Mediterranean fleeing war, persecution or poverty in the Middle East and Africa. The arrivals include many Africans, particularly Eritreans, as well as Syrians. Lombardy, Italy's richest region, is home to 9 percent of the migrants, while Veneto has 4 percent and Liguria 2 percent. All three regions are in the country's north. Sicily is currently accommodating 22 percent of arrivals, according to official figures released in June.

Luca Zaia, the president of Italy's northern Veneto region and a member of the anti-immigrant Northern League party, told Italian television he agreed with the protesters, and complained about the "Africanization" of his own region. "This is a declaration of war for those who don't understand what it means to put [migrants] alongside families with young children," he said. But Treviso Prefect Maria Augusta Marrosu said: "They are staying, because they don't have the choice."

Graffiti sprayed on the side of a building in Quinto said in large red letters: "Prefect Marrosu, take them home."

A near-simultaneous protest in Casale San Nicola, a well-heeled suburb north of Rome, saw police face off against 100 locals protesting the arrival of some 20 migrants.

The protesters, who included members of an extreme right group, shouted: "You can't bring them here" and "We are afraid for our daughters," as several women formed a human chain to try to block the migrants' bus. Clashes erupted between the demonstrators and police who escorted the migrants into a former school that has been turned into a reception center. Two demonstrators were arrested over the incident in which 14 officers were slightly injured, the police said.

Rome authorities condemned the protests and explained the location of the center was carefully chosen in accordance with the law.

Also on Friday, a rescue boat carrying 700 migrants was denied entry to Sicily by Italian authorities who said that there was no room left for the people in the government reception centers, a humanitarian group said. Despite lengthy discussions with Italian authorities, the migrants on a boat operated by medical charity Doctors Without Borders (MSF) were turned away. The boat then headed for the port of Reggio Calabria on the far southern tip of Italy.

The president of MSF's Italian operation, Loris De Filippi, said the "lack of preparation in the Italian system has very concrete consequences that we witness first hand." On Friday Italian media reported a 10-year-old diabetic girl from Syria died during a hypoglycemic episode while making the crossing after the human smugglers tossed the bag containing her insulin overboard.
Last Update: Jul 19, 2015 9:52 pm
RELATED TOPICS