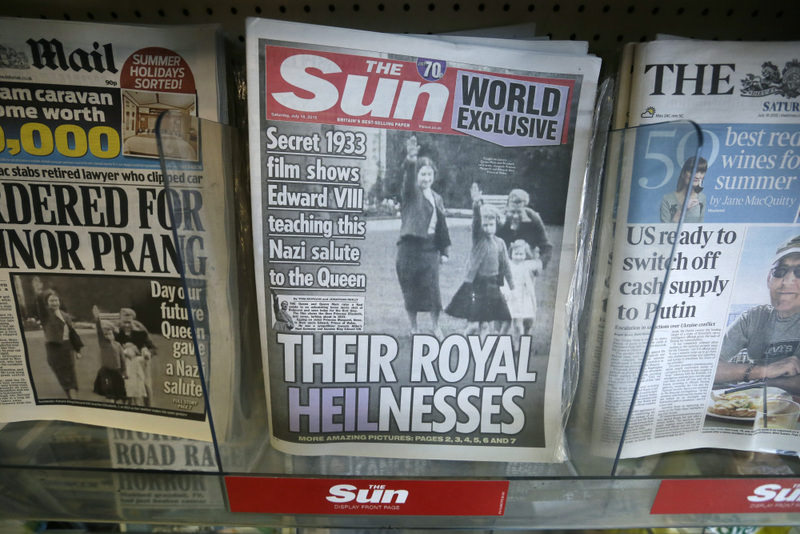 by Daily Sabah with Wires Jul 21, 2015 12:00 am
Buckingham Palace is weighing legal action over leaked film footage that shows Queen Elizabeth II as a child performing a Nazi salute with her family. The 17-second black-and-white clip, which shows the future queen at the age of six or seven raising her right arm with her mother and uncle, who later became King Edward VIII and was criticized by many historians for being sympathetic to the Nazi regime, was released by the Sun tabloid late Friday.

After the footage stirred debate in the country, the palace has launched an inquiry into how the tabloid obtained the film and will consider issues of copyright and criminality depending on the outcome of the investigation, a palace source told the Press Association. The source was quoted as saying the royal household is trying to ascertain where the film came from, who it came from and why it was handed over to the newspaper.

It shows Elizabeth playing with a dog as her sister, princess Margaret, then about three, begins to wave to the camera with both arms. Elizabeth also begins to wave with an outstretched right arm. The queen mother stretches out her arm as well with her palm facing the camera. Elizabeth snaps up her arm again with her hand and arm in a straight line, without waving, in a gesture that mimics a Nazi salute. She begins jumping and dancing with her sister as her mother raises a straightened right arm as well. She looks at her brother-in-law and smiles. The then-Prince of Wales then turns to the queen mother and raises his right arm all the way above his head.

The video is believed to have been shot in 1933 or 1934 at Balmoral Castle in Scotland, shortly after Adolf Hitler and the Nazis came to power in Germany and well before the start of World War II, the Sun said. The Sun's managing editor Stig Abell said the footage was obtained "in a legitimate fashion" and that its publication was "not a criticism of the queen or the queen mum." "It is a historical document that really sheds some insight in to the behavior of Edward VIII," he told BBC radio. The Sun did not reveal how it obtained the footage, but said the original film has been locked away and copies were made of it several years ago. "One has now been handed to The Sun by a source," it said. The palace on Sunday accused the tabloid of exploiting the footage.

"This is a family playing and momentarily referencing a gesture many would have seen from contemporary news reels," a palace source said Sunday. "No one at that time had any sense how it would evolve."

Meanwhile, the footage also stirred debates about the limits of press freedom and royal privacy. On several occasions in the last 30 years, the Palace has taken legal action against newspapers or action to prevent personal information being published. The Queen has twice sued the Sun for breach of copyright in 1988 and 1993. In the same year, Princess Diana also started legal action against the Daily Mirror for publishing the photographs showing her exercising in a gym, the BBC reported.

There was a similar reaction ten years ago when The Sun published a photograph of Prince Harry wearing a swastika armband to a friend's fancy dress party. The story has, though, increased pressure for the royal family's tightly-controlled archives, from which the footage is thought to have leaked, to be opened up. In addition, the British government raided the Guardian's offices in order to destroy hard drives containing information provided by the whistleblower and former NSA analyst Edward Snowden in August, 2013. Cabinet Secretary Jeremy Heywood sent personally by David Cameron, told the editor to stop publishing articles based on leaked material from NSA, the Guardian said. Then the British authorities reportedly raided the Guardian's office in London to destroy hard drives in an effort to stop future publications. Guardian editor Alan Rusbridger said officials from the Government Communications Headquarters (GCHQ) watched as computers, containing classified information passed on by Snowden, were destroyed in the office. After the incident, the U.K. has shown a decrease in press freedom ranking according to Reporters Without Borders report in 2014.
Last Update: Jul 21, 2015 11:44 pm
RELATED TOPICS