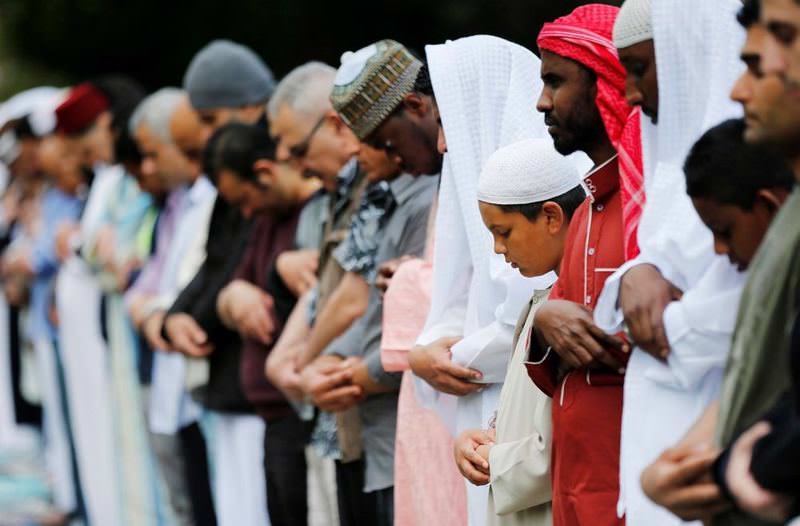 Muslims perform prayers for Eid-al Fitr to mark the end of the holy fasting month of Ramadan at a park in London, Britain.
by Sühem Özge Terece Jul 23, 2015 12:00 am

Britain has long been working to prevent people from being drawn to extremist groups, but recent cases have been criticized for targeting even schoolchildren's freedom of expression

Britain has intensified efforts to prevent violent extremism, especially since the 2005 London bombings and the Islamic State of Iraq and al-Sham (ISIS) threat to the country. However, Britain's new steps are criticized for being an assault on freedom, and critics say it will not work.

The Prevent program is one of the steps that the government launched as part of the counter-terrorism strategy. The program aims to tackle all forms of terrorism and stop more people getting drawn to violent extremism. As many critics discuss whether it really serves the purpose of fighting extremism and terrorism, the way it negatively affects freedom of expression has come to the forefront. A schoolboy told Al Jazeera that he was once accused of holding "terrorist-like" views by a police officer after he was questioned for taking leaflets to school promoting the boycott of Israel. Critics have expressed the concern that the government's counter-extremism strategy has actually expanded into schools. Within the scope of the program, teachers are expected to monitor children and report them when they believe he or she may be inclined to extremism. According to Al Jazeera, Prevent engagement officers have long been active in schools, especially in areas where significant Muslim populations exist.

The boy, who was not named by Al Jazeera to protect his identity, said he was 15 when he was told that badges with "Free Palestine" written on them were "extremist." The boy explained to a police officer his views about freedom and justice and told him he supported Palestine. The police officer told him these could be radical beliefs and warned him not to speak about this conflict at school with his friends. Another report on the counter-extremism policy published by the think-tank Claystone also referred to the case of a teenager who was identified as requiring deradicalization for attending a protest against an Israeli politician. Al Jazeera identified other examples showing that Palestine-related activism or boycotting Israel were things that public officials are expected to look out for as part of the Prevent program.

Alex Kenny of the National Union of Teachers told Al Jazeera, "We have heard of the police going into schools and saying 'Keep an eye on a child if he goes on a demonstration against the bombing of Gaza'." This month, hundreds of academics warned that the extension of Prevent would have a "chilling effect on open debate, free speech and political dissent."

It is not the first case in which support for Palestine or boycott against Israel has created problems. In May, the Canadian government indicated it might begin applying hate crimes legislation against groups that support the boycott, divestment and sanctions (BDS) movement, which seeks to put economic pressure on Israel. Similarly in Israel, Culture and Sport Minister Miri Regev threatened the country's artists last month, saying that those who expose the Palestinian struggle in their work will be monitored and their state funding may be cut. In the same month, the Israeli government proposed new legislation to limit the work of Israeli NGOs, including the funding they receive from international organizations and governments. Justice Minister Ayelet Shaked, who had called for the killing of all the Palestinians last year, accused NGOs of taking foreign money and then criticizing Israel or declaring boycotts against the country.

Meanwhile, British Prime Minister David Cameron unveiled a five-year-counter-extremism plan earlier this week. The plan has drawn strong reactions from Muslim groups and non-governmental organizations in the country, which believe that Cameron's message and its plan could further isolate the British Muslim population. Omar al-Hamdun, head of the Muslim Association of Britain (MAB), said Cameron's speech could be detrimental to Muslims in the U.K., Anadolu Agency reported.

"For example, Cameron is right in his views on the need to counter-extremism, but we think this strategy will cause more harm to British Muslims than good," he said. Al-Hamdun stated that he did not agree with Cameron's remarks, in which he said, "Lots of Muslims do not identify themselves as Britons." The plan will also include some legislative proposals such as the closure of certain religious venues and the ban of speeches by certain Muslim religious figures at universities and schools.

More than 700 Britons have traveled to Syria and Iraq to join extremist groups and hundreds have returned to the U.K., according to counter-terrorism police. There are around 3 million Muslims in the U.K., which represents nearly 5 percent of the country's total population.
Last Update: Jul 23, 2015 11:29 pm
RELATED TOPICS