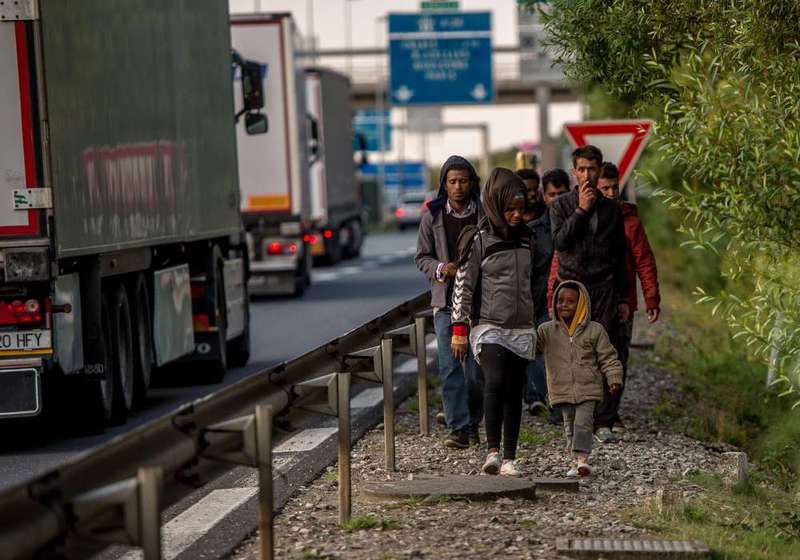 by Daily Sabah with Agencies Aug 02, 2015 12:00 am
Britain and France on Sunday urged other European Union states to help them tackle the growing crisis in northern France caused by thousands of migrants seeking to make illegal and dangerous crossings into England. The French port of Calais has become a focal point for the huge influx of migrants entering Europe to escape poverty and violence in the Middle East and Africa.

Nightly attempts by large groups of the estimated 5,000 migrants in Calais to force their way through the rail tunnel linking France and Britain have provoked public anger and severely disrupted the flow of goods between the two countries. "There are no easy solutions - and it is not for the U.K. and France to solve these problems alone," British interior minister Theresa May and her French counterpart Bernard Cazeneuve said in a joint letter published in the Sunday Telegraph. "Many of those in Calais and attempting to cross the Channel have made their way there through Italy, Greece or other countries. That is why we are pushing other member states - and the whole of the EU - to address this problem at root."

Several people have been killed trying to enter Britain, where they believe they have better prospects of a new life. The joint plea came as Britain, where the crisis is heaping pressure on Prime Minister David Cameron to take action, detailed some of the extra security measures agreed with French President Francois Hollande on Friday. Cameron's office said Britain would fund a significant boost in the number of private security guards patrolling the French entrance to the Eurotunnel-operated under-sea rail link. New fences, security cameras and infra-red detectors would also be used to improve security. French authorities have already increased the number of police in the area. Britain and France said their efforts were not limited to beefing up security, and that they had led efforts to break up the criminal gangs who seek to profit from the flow of migrants. "Ultimately, the long-term answer to this problem lies in reducing the number of migrants who are crossing into Europe from Africa," May and Cazeneuve wrote. "Many see Europe, and particularly Britain, as somewhere that offers the prospect of financial gain. This is not the case - our streets are not paved with gold."

Late on Saturday, French riot police sprayed migrants with a chemical irritant as they tried to storm the Channel Tunnel, and the British and French interior ministers said the nightly attempts to reach Britain are part of a "global migration crisis" that needs an international solution. The migrants, who broke down several security fences late Saturday, were forced to retreat by riot police as they attempted to breach the final fence near the entrance of the 50-kilometer tunnel under the English Channel. The migrants, estimated to number around 200 by an Associated Press journalist, faced off for close to an hour with security forces, chanting slogans including: "Open the border" and "We are not animals." Thousands of migrants have been scaling fences near the tunnel, often referred to as the Chunnel, in recent weeks, trying to hop on freight trains or trucks destined for Britain. One man was fatally crushed by a truck.

The governments are keen to show a united front on this issue, but many British politicians have criticized France for supposedly lax security at the tunnel.

Most of the migrants have fled war, dictatorships and poverty in Africa and the Middle East, entering Europe through Greece or Italy before heading north. Many think Britain offers the best prospects, because of the English language, welfare benefits and the perceived ease of getting a job. Compared to Syria's neighboring countries, the U.N. refugee agency encouraged European countries to do more to share the burden of the international community in the migrant crisis. Syria's neighboring countries – Turkey, Lebanon, Jordan and Iraq – have over 3 million Syrian refugees, a number that is not comparable with the total number of Syrian refugees that have sought shelter in Europe. Ensuring access to asylum for refugees, including at sea and land borders, remains a significant challenge for EU countries as human rights organizations have urged EU member states to fulfill their international protection obligations.
Last Update: Aug 02, 2015 10:41 pm
RELATED TOPICS