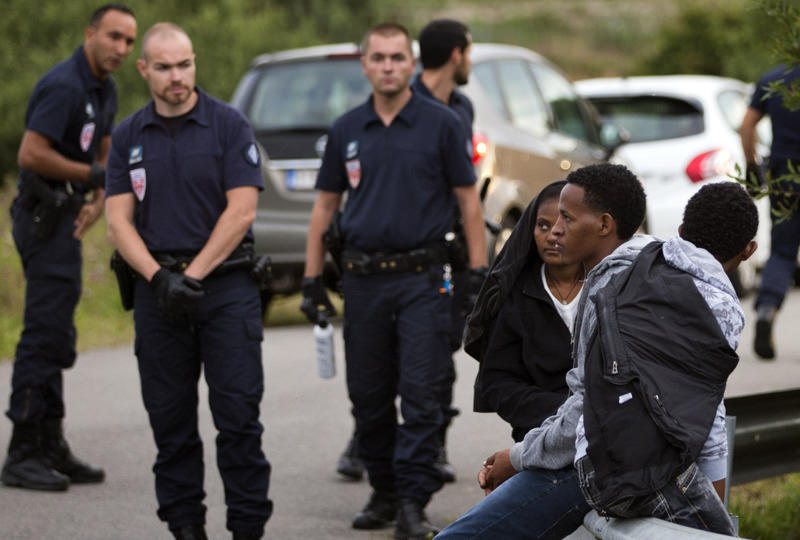 Police officers blocking the road stand next to migrants as they try to access train tracks that lead to the Channel Tunnel in Calais.
by Daily Sabah with Wires Aug 05, 2015 12:00 am

Dramatic images of migrants storming the Channel Tunnel from France have prompted British Prime Minister David Cameron's government to ramp up anti-immigration rhetoric and spurred Eurosceptics to amplify calls for Britain to quit the European Union. The government's increasingly shrill tone has upset charities, churchmen and left-wing politicians while anti-EU campaigners have seized on the crisis as proof that Britain is unable to protect its own borders while remaining in the bloc.

Cameron, criticized by political rivals for referring to the migrants as "a swarm," won an unexpectedly decisive election victory as recently as May. But the Calais events, in which hundreds of migrants from North Africa and the Middle East try nightly to scale fences, poses a political problem by spotlighting his failure to keep his promises on controlling immigration. That may make it harder for him to persuade voters to stay in the EU. Cameron has promised to overhaul Britain's EU ties before holding a referendum on membership by the end of 2017. He has also vowed to cut net annual migration to the tens of thousands from the hundreds of thousands, but repeatedly missed the target.

Calais has long been a magnet for migrants seeking to try their luck at slipping into Britain, a country without identity cards where it is easier for workers to melt into a booming informal economy. What is different this time is that the migrants number in the thousands not hundreds, and disruption to freight and passenger traffic has been prolonged in the summer holiday season. French police union official Gilles Debove told Reuters some 1,700 attempts to enter the tunnel had been recorded overnight, and stone throwing had injured a French riot police officer.

The crisis has proved fatal for some migrants, nine of whom have been killed trying to make the crossing. Now some French politicians are talking of scrapping treaties that allow Britain to operate border controls on the French side of the tunnel. Indeed one leading conservative Gaullist, Xavier Bertrand, suggested on the weekend that if Britain did not agree to start processing the asylum seekers, France should simply let them loose to try to breach the border. The British government has responded by holding a series of meetings of its emergency response committee, known as Cobra, and by pledging more security fencing and sniffer dogs.

It has also promised to bring forward a law to tighten immigration rules, targeting landlords who rent properties to illegal immigrants with jail sentences, and has floated the idea of stripping families of failed asylum seekers of benefits. Landlords who do not evict immigrants lacking the right to remain in Britain or fail to carry out proper checks on their status could face prosecution and a maximum punishment of five years in prison, Communities Secretary Greg Clark said. The measures, to be included in a new immigration bill, will "make Britain an even harder place for illegal migrants to operate," the government said. But the London-based Refugee Council said it was "extremely concerned that such measures will have detrimental and unintended consequences" by penalizing asylum seekers and refugees with a legal right to live in Britain. "Refugees and asylum seekers came to the U.K. escaping persecution," said Lisa Doyle, the group's head of advocacy.

The government's approach has angered some. Church of England Bishop Trevor Willmott warned the government not to forget its humanity. "When we become harsh with each other and forget our humanity then we end up in these stand-off positions," he told The Observer newspaper.

Habib Rahman, chief executive at the Joint Council for the Welfare of Immigrants, called ideas to remove state support from families of failed asylum seekers the "worst kind of political posturing," saying it would have a wider discriminatory effect.

Meanwhile, migrants in France made hundreds of attempts overnight to penetrate the Channel Tunnel to get to Britain, a police source said yesterday, as an unidentified "anomaly" in the tunnel slowed traffic. Eurotunnel, which operates the Channel Tunnel, was also inspecting a section of one of the undersea tunnels for an "anomaly" that was causing delays, the group said. Passengers taking the vehicle shuttle from Folkestone in Britain to France had to wait two hours before boarding, and those on the French side were delayed one hour. It was not immediately clear whether the problem was an issue with the rail track, the presence of a migrant or another incident. Despite an increasing number of police in the region, migrants continue to try to get to Britain. A police source said yesterday some 500 migrants were seen overnight next to the Channel Tunnel site near Calais, and of the 600 attempts they made to get into the site, around 400 were repelled by authorities.

Meanwhile, the European Union has offered funds and aid to help France cope with growing numbers of migrants near the northern city of Calais. EU executive Commission spokeswoman Mina Andreeva said Monday that "we can provide technical assistance through the EU agencies and emergency funding" to France. She said the border incidents are "another stark example for the need for a greater level of solidarity and responsibility" among EU member states. The Commission wants all member countries to participate in a scheme to relocate thousands of refugees from Greece and Italy. Britain has declined to take part.
RELATED TOPICS