Hundreds feared drowned after boat with 700 migrants capsizes of Libya 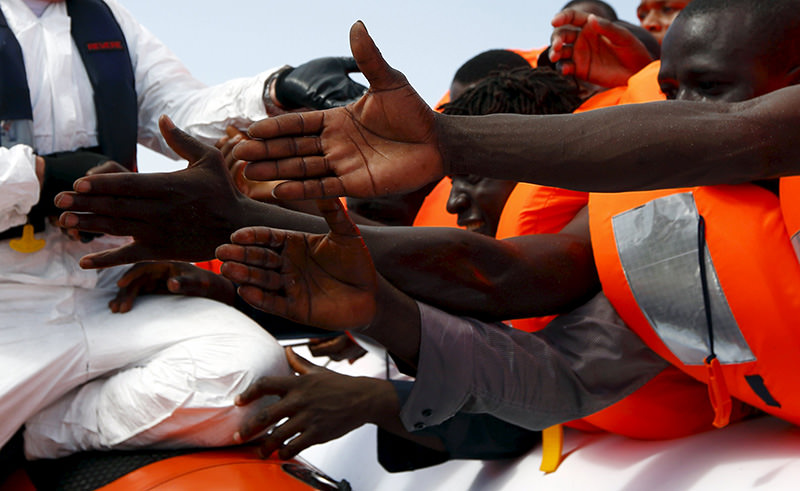 Some 118 migrants were rescued from a rubber dinghy off Libya on Monday morning. Migrants reach out to grab hold of rescuers on the boat off the coast of Libya, August 3 (Reuters photo)
by Aug 05, 2015 12:00 am
A boat packed with up to 700 African migrants capsized in the Mediterranean Sea off the coast of Libya on Wednesday and many were feared dead, officials and aid agencies said.

The humanitarian group Medecins sans Frontieres, whose rescue ship Dignity 1 was in the area, said in a tweet that the boat was believed to have been carrying about 700 people.

"The team on the Dignity 1 can confirm that there have tragically been many deaths but does not have figures at this stage," one of its tweets said.

In another tweet, the U.N. refugee agency UNHCR said about 600 people were on board, that about 250 had been rescued and 16 bodies recovered so far.

An Italian coastguard spokesman said an overcrowded boat had overturned off the Libyan coast just as ships came to its rescue but had no further details. The operation, which also included Italian and Irish vessels, was continuing, he said.

The Mediterranean Sea is the world's most deadly border area for migrants. More than 2,000 migrants and refugees have died so far this year in attempts to reach Europe by boat, compared with 3,279 deaths during the whole of last year, the International Organization for Migration said on Tuesday.

In April, a fishing boat with up to 800 migrants sank, making it the deadliest shipwreck in the Mediterranean for decades and a symbol of Europe's long-running migrant crisis.

The 20-metre (66-foot) vessel capsized as it approached a merchant ship that had come to its assistance.