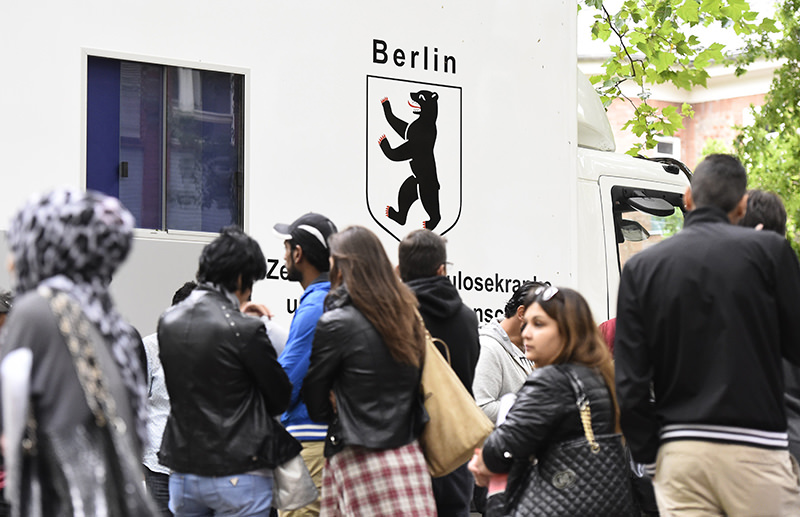 Refugees queue up in front of a medical truck in the yard of the ,State Office of Health and Social Affairs, in Berlin's Moabit district (AFP Photo)
by Aug 09, 2015 12:00 am
Conservative German lawmakers on Sunday called for more measures to deter Balkan citizens from seeking asylum in Germany, as Europe's biggest economy grapples with a record number of refugees.

Most are fleeing war and poverty in the Middle East and Africa, but of the 180,000 refugees who arrived in Germany in the first half of this year, 70,000 came from the Balkans in southeast Europe.

Many come in search of better job prospects and living standards, but the chances of them gaining asylum are slim. Just 0.1 percent of applications from the Balkans were successful in the first half of 2015, according to the Ministry for Migration and Refugees.

The number of asylum applications in Germany is expected to more than double to 450,000 this year from 200,000 in 2014 and authorities are struggling to take care of all the applicants.

"Whoever comes from Kosovo, should be sent back home within a month," he told Die Welt newspaper.

Manfred Weber, leader of the centre-right European People's Party (EPP), and member of the Christian Social Union (CSU), raised the idea of reintroducing obligatory visas for citizens from Kosovo and Serbia.

"In the current situation, this belongs on the table," Weber, told Deutschland Funk radio in an interview.

Germany has seen a sharp rise in the number of people from Kosovo applying for asylum since a relaxation of travel rules has made it easier to reach European Union borders via Serbia.

It received almost 29,000 applications from Kosovars in the first six months of this year -- the second biggest group after those from Syria -- and up from around 2,000 in the same period in 2014, said the Migration Ministry.

Thomas Strobl, another senior CDU member, told Der Tagesspiegel that Germany should look to reduce the financial support given to asylum seekers to remove it as an incentive.

The Frankfurter Allgemeine Sonntagszeitung reported that the government had decided to bring forward an asylum summit to Sept. 9 from October or November.

The summit's agenda will include widening the list of countries deemed safe -- thereby removing the right to claim asylum from its citizens -- to include Kosovo, Albania and Montenegro, the paper said.

This is likely to meet resistance from the Greens, who largely prefer speeding up processing times and making clear via information campaigns in home countries that the chances of receiving asylum are slim.

A spokesman for government could not confirm the new date for the asylum summit nor give details of the agenda.