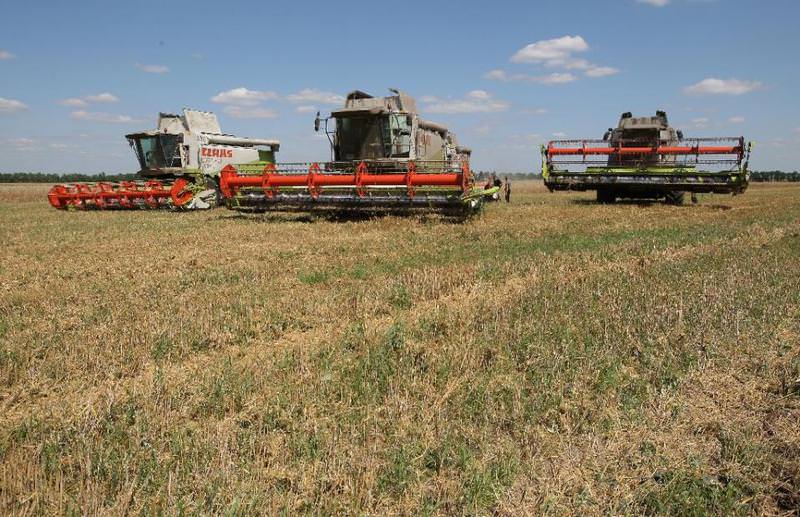 by Aug 10, 2015 12:00 am
Oleksandr Verzhykhovskiy slips a crisp stalk of wheat through his fingers and surveys the sun-drenched fields that once made war-torn Ukraine the "breadbasket of Europe" and now embody its economic hopes. "This is a treasure, if you know how to treat it right," the 29-year-old chief executive of the AgroKIM agriculture company said with a lustful air. But the three brand new combines working these fields about 100 kilometers (60 miles) north of Kiev are integral elements in the maddening state of affairs the crisis-wracked ex-Soviet state faces. Verzhykhovskiy's booming crop holds the promise of Ukraine regaining its title as one of the world's main suppliers of various grains. But the nearby hamlet of Mala Divytsa reflects the far more depressing reality of dilapidated houses and potholed roads that seem to have last been patched up in long-gone communist times. The 16-month-long separatist insurgency has shuttered much of east Ukraine's heavy industry and claimed more than 6,800 lives. It has also sent economic shock waves throughout the country of more than 40 million. The economy contracted by nearly seven percent last year and is projected to do even worse in 2015. Ukraine depends on Western financial assistance -- funds that primarily go to pay off old debts. Factory output is down by nearly a fifth from last summer and consumers are buying 25 percent less than they did a year ago.

But Verzhykhovskiy looks at his swaying stalks and smiles. Ukraine's total crop production reached a post-Soviet record of 63 million tons in 2014 and is on course to nearly match that mark this year. The battled-scarred nation, so eager to wrestle itself away from Moscow and fully embrace the West, managed to export an impressive 34.5 million tons of grain in 2014. The Financial Times wrote last month that Ukraine was set to become China's top supplier of corn in the first half of this year. The London business daily reported that close to an eye-popping 90 percent of China's maize imports came from Ukraine, and not its direct neighbor and fellow agricultural power Russia. Moscow's exports have been particularly hard-hit by a trade war with the West that was sparked by the Kremlin's March 2014 seizure of Ukraine's Crimea peninsula.

It has helped that the fighting has left most cultivated fields untouched. A centuries-old farming tradition also inspires many Ukrainians to feel special pride in their land. But some factors are well outside Verzhykhovskiy's control. A strong dollar has seen commodities lose value and the price of corn drop by about 15 percent since the start of the year. "Prices are not good," the young farm boss conceded. "We operate without a profit on most of our cereals." This has cut off foreign investments and left Ukrainian farmers reliant on local banks for loans loaded with exorbitant interest rates few can afford. "Last year was tough on investment," Deputy Agriculture Minister Oleksiy Pavlenko told AFP. But the minister is placing hope on $1 billion in new farming equipment that has been promised by the United States. Beijing and Kiev signed a $3 billion loan-for-corn deal in 2012 which Ukraine also hopes to extend. All that machinery would find plenty of fertile land to plough. The World Bank estimates that more than 70 percent of Ukraine's territory is arable for farming. The rate is Europe's second highest and bested only by small and impoverished Moldova.

But economists and the agriculture ministry admit that the sector now needs a push that can only come from private investment. World Bank data also shows all Ukraine's cultivated land yielding about 4,000 kilograms of cereal per hectare (3,600 pounds per acre) -- about half the rate of Germany and similar to that of Canada. Yet foreigners remain wary about ploughing money into even the peaceful parts of the unsettled east European country. Transparency International ranks Ukraine 142nd out of 175 nations on its corruption index. The court system's independence has been suspect for decades and investor rights are often ignored. "The judicial system has to function before we see any foreigners come running," said ProAgro consultancy analyst Mykola Vernytsky. Kiev plans to put up 254 state-held farms and agricultural businesses for sale this year.
Last Update: Aug 10, 2015 1:18 am
RELATED TOPICS