Number of illegal immigrants heading to Greece from Turkey skyrockets 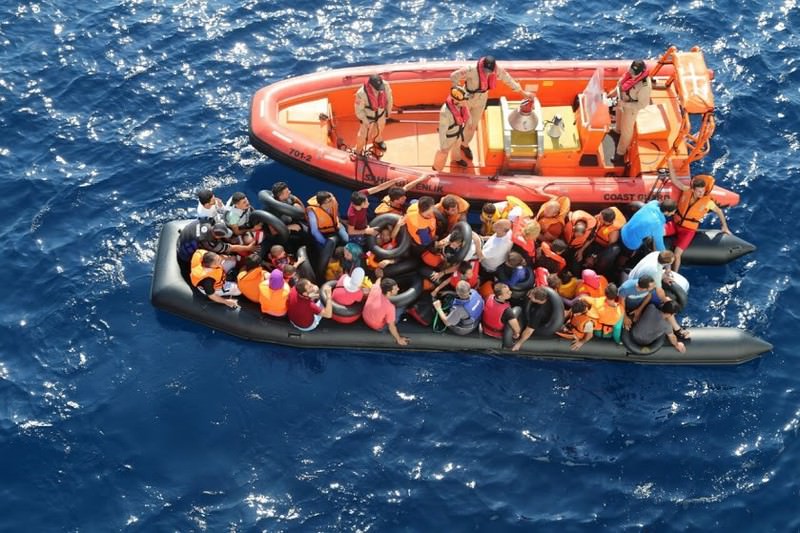 Illegal immigrants huddled in a boat next to a Coast Guard boat. Every year, thousands try to cross to Greek islands from Turkey.
by Daily Sabah with Wires Aug 11, 2015 12:00 am

Figures reported by Turkish media reveal the number of illegal immigrants trying to cross to Greece from Turkey this year rose fifty fold compared to the past five years, a dire number as the migrant crisis intensifies

Turkey faces a dismal task of stopping the steady flow of illegal immigrants increasingly heading to the Greek islands in the proximity of the country's Aegean coast.

As many as 1,000 migrants are estimated to cross every day to the Greek islands of Lesvos, Kos and smaller ones dotting the Aegean Sea to where the western Turkish cities of İzmir and Çanakkale, two main migrant hubs, are littoral.

Migrants defying death in shoddy and packed boats usually sailing at night often end up stranded at sea when their boats capsize or they end up drowning. Figures from Habertürk daily showed that at least 585 migrants lost their lives in sea accidents in Turkish seas. On Sunday night alone, scores of migrants were rescued as they attempted to travel to the Greek islands from Bodrum, a touristic seaside town in southwestern Turkey. Fifteen Pakistani nationals managed to swim back to the Turkish coast when their rubber boat began taking on water and sank. Fifty-five others in three rubber boats caught in the middle of a storm were rescued by the Coast Guard. Meanwhile, 51 migrants in two other boats managed to reach the Greek coast.

Karani Nawal, 32, an illegal Pakistani immigrant who survived thanks to his life vest and swimming skills, told Doğan News Agency that he has been in Turkey for two years and it was his fourth attempt to cross into Greece. "The weather was fine when we left Turkey but it became worse in open water. We couldn't steer the boat," he said. Nawal added that he would try to get to a Greek island for a fifth time as well. As a matter of fact, most illegal immigrants prefer returning to Turkey to renew their attempts after they are intercepted and deported. Many say they already face a deathly situation in their home countries ravaged by conflicts and poverty.

Greece is the main destination for migrants mainly made up of Syrians fleeing the ongoing civil war in their country and impoverished masses from Asian countries. The country neighboring Turkey is a transit route for other European countries such as Germany. Nevertheless, reaching Greece is only the beginning of an arduous journey for migrants as they are imperiled by a more dangerous journey via land in Europe, this time packed in trucks or engaged in a trek that takes days. Greece itself faces criticism for the "shameful" conditions migrants face. The United Nations had warned last week that the country was unable to cope with the influx of refugees on its small islands. The United Nations refugee agency, UNHCR, said some 124,000 people, mainly Syrians, Afghans and Iraqis, arrived on Greek islands since the beginning of 2015, a 750 percent increase from the same period in 2014. Vincent Cochetel, a UNHCR official, said migrants arriving on Greek islands from Turkey are forced to sleep outdoors and rely on volunteers for food and water.
RELATED TOPICS