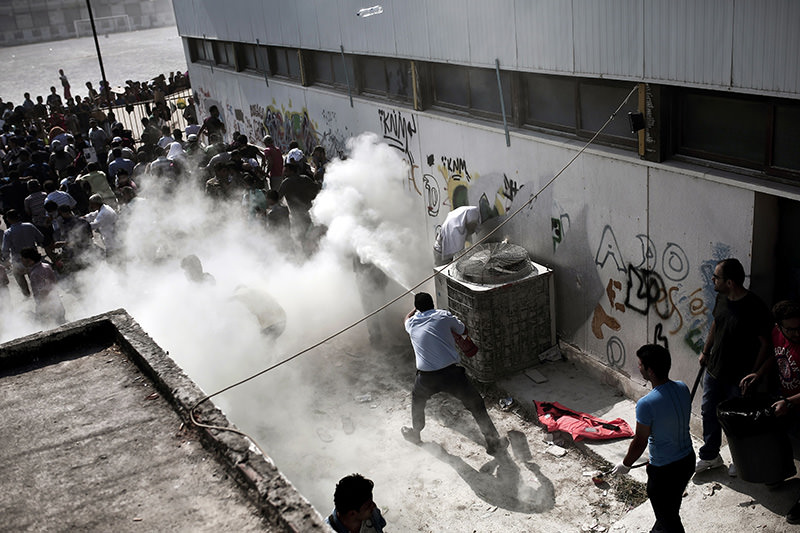 Policemen (foreground, R) try to disperse hundreds of migrants by spraying them with fire extinguishers during a gathering for a registration procedure at the stadium on the Greek island of Kos, on August 11, 2015 (AFP photo)
by Aug 11, 2015 12:00 am
Overwhelmed police on the Greek island of Kos beat migrants with truncheons and sprayed them with fire extinguishers on Tuesday as its mayor warned the refugee crisis on the island could end in "bloodshed".

The migrants, mostly Afghans and Syrians, were being relocated to a local football stadium on Kos after camping alongside the island's roads and beaches for weeks.

Four police used truncheons and fire extinguishers seemingly to prevent a stampede as a crowd tried to squeeze through a door into the stadium, an AFP photographer at the scene said.

At least one woman had already fainted in the heat and many children were crying as the tightly packed mass of people jostled for space, just days after the country's handling of migrants came under fire from the UN.

Tensions on the tourist island are high with its mayor warning Tuesday of "bloodshed", claiming there were 7,000 migrants stranded on Kos which has a population of only 30,000 people.

On Monday, an officer on Kos was suspended after being filmed slapping and shoving migrants queueing outside the local police station as they waited to be documented so they could go on to Athens.

Kos mayor Giorgos Kiritsis told the Greek ANA news agency there "was a risk of bloodshed if the situation degenerates" further.

A police source in Athens told AFP that the latest incident was because the migrants tried to get into a police post to be get their papers sorted while the officers wanted to process them in the stadium. 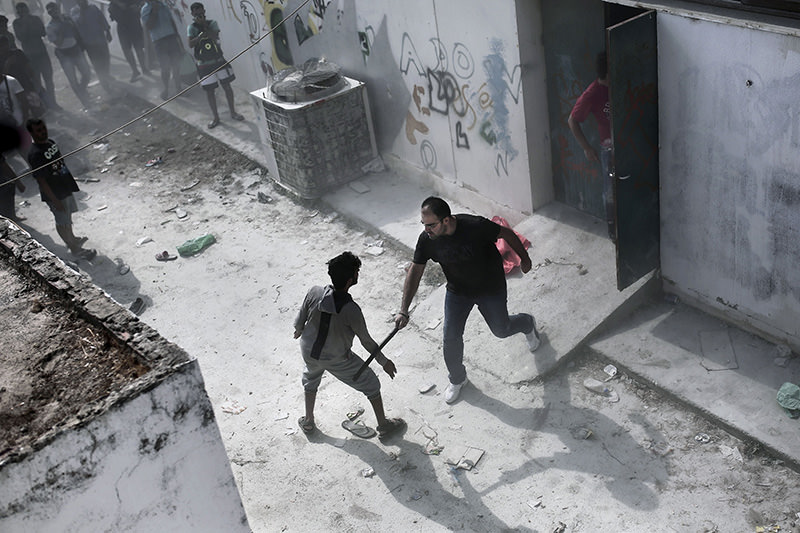 The UN refugee agency's division for Europe said last week that 124,000 refugees and migrants have landed in Greece since the beginning of the year.

The agency said that Athens' response to the problem had so far been "totally shameful", with many of those landing on the eastern Aegean islands near Turkey usually forced to sleep in the open, lacking access to washing facilities and toilets.

Greek authorities are converting a container facility near central Athens to accommodate hundreds of migrants currently sleeping in one of the capital's parks.