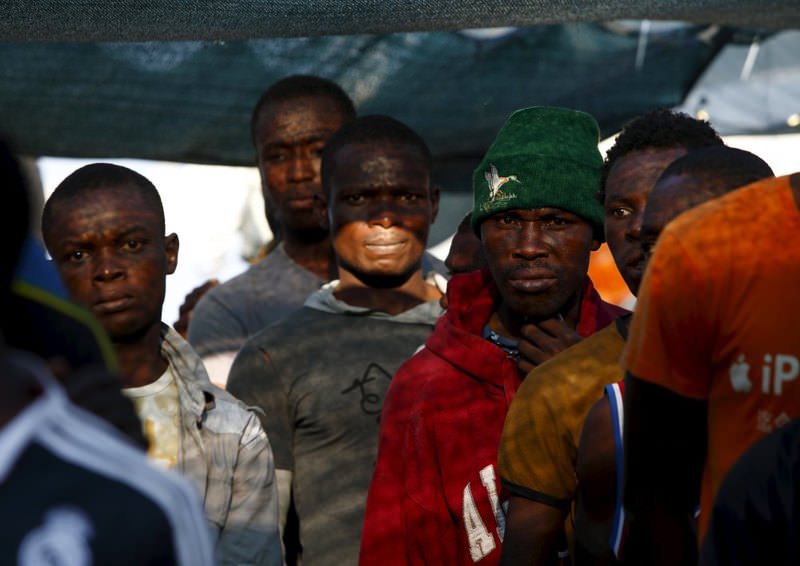 Migrants line up on the deck of the Doctors without Borders rescue ship Bourbon Argos as it arrives in Trapani, on the island of Sicily, Italy.
by Daily Sabah with Agencies Aug 11, 2015 12:00 am

Amid the overflow of migrants from the Middle East and Africa trying to reach Europe, the U.K.'s Philip Hammond said migrants ‘threaten EU standards,' revealing the increasing anti-immigration rhetoric in response to the crisis

A surge in migrants from Africa threatens the European Union's living standards and social infrastructure, British Foreign Secretary Philip Hammond said on Sunday, saying the bloc was unable to take in millions of people seeking a new life. Hammond's comments, some of his most outspoken on the subject yet, underscore how the British government is ramping up its anti-immigration rhetoric in response to a spike in migrant attempts to reach Britain via the Channel Tunnel from France.

They are also part of a wider EU trend which has seen Alexis Tsipras say Greece cannot cope with the number of migrants fleeing instability in the Middle East and Africa and German calls for tighter immigration curbs. "We have got to be able to resolve this problem ultimately by being able to return those who are not entitled to claim asylum back to their countries of origin," Hammond, speaking while visiting Singapore, told BBC TV. "That's our number one priority." Hammond said there would always be millions of Africans with "the economic motivation" to want to get to Europe and that EU laws meant migrants were "pretty confident" they could stay.

"That is not a sustainable situation because Europe can't protect itself and preserve its standard of living and social infrastructure, if it has to absorb millions of migrants from Africa," he said. Britain's Conservative government is under pressure to show it is acting to solve what the press has dubbed "the Calais crisis" with hundreds of migrants trying nightly to scale fences around the entrance to the Channel Tunnel in France. That has disrupted passenger and freight traffic and dominated the summer's headlines. Some of the migrants manage to reach Britain. On Sunday, police said they had arrested 18 suspected illegal migrants found hidden in the back of a lorry in England. But the government's increasingly shrill tone on the issue - Cameron was criticised for referring to migrants as "a swarm" - has upset charities, churchmen and left-wing politicians.

Earlier this month, Church of England Bishop Trevor Willmott told the government not to forget its humanity. "When we become harsh with each other and forget our humanity then we end up in these stand-off positions," he told the Observer newspaper. Hammond said the Calais crisis was far from solved. "So long as there are large numbers of pretty desperate migrants marauding around the area there will always be a threat to the tunnel's security," he said.

Meanwhile, over 140 migrants were found stranded this weekend on motorways in Britain and Austria, with at least a dozen children among them, police said Sunday. Eighty-five squeezed into the back of a lorry - including 16 children – and were discovered by police on Saturday abandoned on an Austrian motorway. The refugees, mostly Afghans, had been locked into the lorry for at least 12 hours, and an 8-month-pregnant woman had to be taken to hospital after blacking out. Several others were also taken ill, according to public broadcaster ORF, with the migrants forced to make holes in the lorry's sides so they could breathe. The lorry's driver abandoned the vehicle before police arrived.

Also on Saturday Austrian police found six Syrian families, numbering 40 people, sitting on the grass in a layby on another motorway, ORF also reported. The discovery came as another 18 migrants were found stowed away on a lorry on a British motorway. Police believe they had been carried through the Channel Tunnel from France in the back of the vehicle before being discovered 178 kilometers to the north on the M1 near Luton. Police tweeted a picture of the migrants sitting on the ground next to a parked lorry loaded with cargo, apparently at a motorway service station. There were no reports of any being unwell. A spike in the number of migrants trying to cross the Channel from France to Britain has pushed the issue to the top of the political agenda there.

Austria is on the main migrant land route into Europe, with thousands passing through the country after crossing into the European Union over the Serbia-Hungarian border. Most are trying to reach Germany and Scandinavian countries. Only two of the migrants found in the lorry near Sankt-Poelten, west of Vienna, have asked for asylum in Austria. Groups of migrants are stopped almost daily crossing Austria.

In the face of the overflow of migrants from the Middle East and Africa trying to reach Europe with the hope of a better life, how the EU deals with the immigration crisis is becoming a major problem for European countries. Earlier this week, the U.N. refugee agency (UNHCR) said that there is a crisis in Europe because the EU has failed to respond to the influx in a coordinated fashion, not because of the number of refugees. The increasingly violent and chaotic situation in the Middle East has led many people to flee the conflict in an attempt to seek security and shelter in more prosperous and peaceful countries in Europe. The number of refugees fleeing violence has been gradually increasing as hundreds of immigrants hope to reach the European shores of Italy, Malta, Spain, Greece and Cyprus.

Meanwhile, the European Commission yesterday approved 2.4 billion euros ($2.6 billion) of aid over six years for countries including Greece and Italy that have struggled to cope with a surge in numbers of immigrants. Italy is to receive the most aid - nearly 560 million euros, while Greece will receive 473 million.
RELATED TOPICS