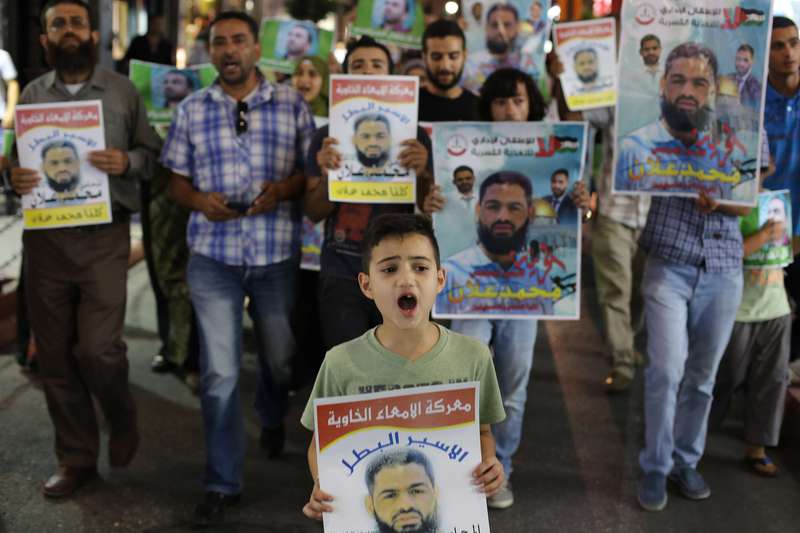 Palestinian protesters rally for Mohammed Allan (portraits), who's life is at risk after hunger strike against detention without trial. (AFP Photo)
by Compiled from Wire Services Aug 19, 2015 12:00 am
Palestinian prisoner Mohammed Allan ended his 65-day hunger strike against his detention without trial on Wednesday after the Israeli Supreme Court suspended his arrest warrant.

The decision did little to resolve a debate over Israel's controversial practice of holding suspects without charge, or a new law permitting force feeding of hunger strikers. The case of Mohammed Allan, who has been on a hunger strike for 65 days, had appeared set to be the first test of the law before he fell unconscious last Friday.

After a long day of deliberations, the Supreme Court announced late Wednesday that Allan, who doctors said has suffered brain damage, would remain hospitalized, but that his shackles would be removed and his family can visit him. It also said his "administrative detention" is suspended. But the decision did not address what would happen to Allan if he recovers, saying only he can petition for his release if his condition improves.

Allan went on a hunger strike to protest the policy of administrative detention, which allows authorities to hold suspects for months without charge. Israel defends the practice as a necessary tool to stop militant attacks and arguing that revealing the charges would lay bare intelligence networks and put people's lives in danger. But rights groups say the measure violates due process and is overused.

The high-profile case took a dramatic turn earlier Wednesday after the court ordered he undergo medical tests to determine the level of brain damage and said he would be freed if it was irreversible.

Doctors said results of the MRI were inconclusive.

Dr. Hezy Levy of Barzilai hospital in southern Israel, where Allan is being treated, said the detainee was "incoherent" and "not connecting with his surroundings."

"There is some damage in a part of the brain that was probably caused by a lack of vitamins ... and it is expressed in other systems of his body," Levy said.

He said Allan would be administered the substances his body is missing.

Allan is in Israeli custody for his alleged affiliation with Islamic Jihad, a Palestinian militant group that has carried out scores of attacks on Israeli civilians and soldiers.

He denies the affiliation and launched his strike to protest his being held for months without charge or trial.

Allan's attorney, Sawsan Zaher, said Allan should be released even if the damage is not irreversible as it is still deep enough to prevent him from posing a threat.
Last Update: Aug 19, 2015 10:59 pm
RELATED TOPICS