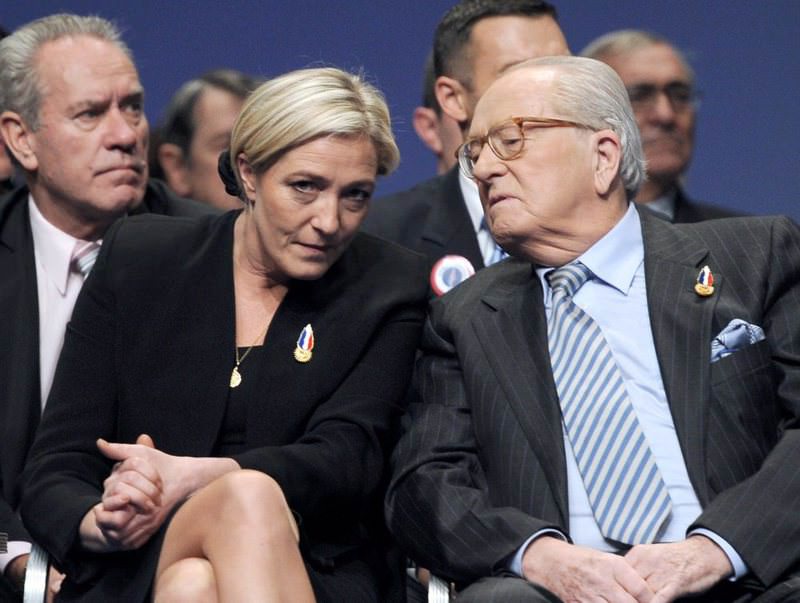 by Associated Press Aug 22, 2015 12:00 am
Jean-Marie Le Pen, who co-founded France's far-right National Front, was excluded from his party on Thursday following a disciplinary hearing for belittling the Holocaust and insulting party leaders. He quickly said he would contest the move in court.

The decision regarding a figure who has for decades been one of the mainstays of French politics came in a statement hours after the end of a three-hour hearing by the party's executive bureau. In the tribunal-like session, the 87-year-old Le Pen defended himself against a list of 15 complaints, all consisting of public statements considered a liability to the new image of the anti-immigration party. Party president Marine Le Pen, his daughter, has been trying for months to oust her father, who held the title of honorary president for life. A statement said the executive bureau "deliberated and decided ... the exclusion of Mr. Jean-Marie Le Pen as member of the National Front."

Le Pen said the decision by six members of the eight-member executive bureau was carried out by an "execution squad" on orders of his daughter and the party's No. 2, Florian Philippot, whom father Le Pen openly distrusts. Speaking to iTele TV station, Le Pen said he would "obviously" contest it. He also contended that his title of honorary president for life, conferred at a 2010 party congress, cannot be removed. Le Pen has won three recent court decisions in what began as a family feud and mushroomed into a debilitating party crisis as the National Front prepares for regional elections in December.

While Marine Le Pen signed off on the complaints and personally summoned him to appear at the hearing neither she nor Philippot was present. Philippot had said they preferred not to be both judges and accusers in what amounted to a trial. Le Pen's lawyer, Frederic Joachim, called the decision a "political assassination." Visibly stunned, he was being interviewed on BFM-TV when the announcement was issued. The party statement said that Le Pen would be notified "shortly" of the reasons behind the decision.

Le Pen, who has been convicted in French courts of racism and anti-Semitism, was long a thorn in the side of French politicians on both left and right before becoming what his daughter viewed as a handicap for the party as she scrubbed up its image to make the National Front a respectable political alternative. He made it to the final round of the 2002 presidential race, shocking France and the world.

Le Pen named his daughter as his successor in 2010, and she has since chalked up electoral victories for the National Front, with polls suggesting she could become a leading contender in the French presidential race in 2017 her ultimate goal. A new chapter of the father-daughter feud opened with Marine summoning her father before the bureau. The 15 complaints listed in her letter targeted recent public statements by Le Pen, including those in which he downplayed Nazi gas chambers as a "detail in the history" of World War II.

Le Pen contends his remarks fall within the domain of freedom of expression, and says insults targeting Marine Le Pen and Philippot were reactions to their injurious remarks toward him. Philippot at one point compared Le Pen to an aging diva who refuses to leave the stage. Le Pen contested the executive bureau's right to judge him, noting in a statement issued during the hearing that it was passing judgment for a second time in months even though a court annulled an initial decision.

However, the normally feisty Le Pen left the meeting with a conciliatory tone, offering an outstretched hand in search of a "signal of pacification." "I'm almost a man alone," Le Pen said. Bruno Gollnisch, a member of the party's old guard also present at the hearing, said in a telephone interview that the political consequences of the decision to exclude Le Pen from the party "will be absolutely disastrous." Apprised of the decision, Le Pen reverted to his feisty nature. He said he will attend a September gathering of the party, and "I'll be there, obviously in my place as honorary president."
RELATED TOPICS