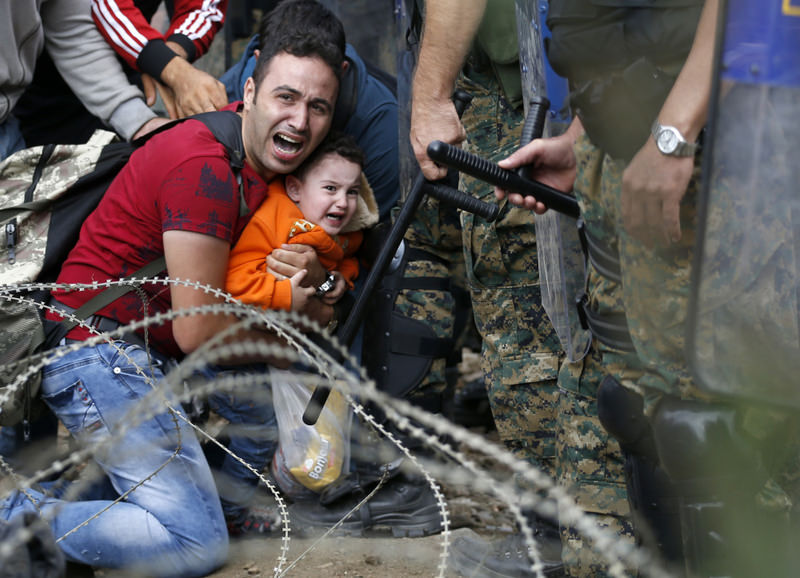 A migrant holding a boy reacts as they are stuck between Macedonian riot police and other migrants during a clash near the Greek-Macedonian border.
by Daily Sabah with Wires Aug 22, 2015 12:00 am

Macedonian special police forces fired stun grenades on Friday to disperse thousands of migrants stuck in no-man's land with Greece, a day after declaring a state of emergency on its borders to deal with a massive influx of migrants heading north to the EU.

A Reuters reporter said tear gas was fired and said that they saw at least four bloodied migrants taken for treatment on the Greek side of the border. "No more Macedonia," one officer said in English to a Syrian man requesting passage.

The crowd of 3,000 migrants who spent the night out in the open made several attempts Friday to charge Macedonian police after the border was shut to crossings the previous day. At least eight people were injured in the melee, according to Greek police. One youngster was bleeding from what appeared to be shrapnel from the stun grenades that were fired directly into the crowd. Police backed by armored vehicles spread coils of razor wire over rail tracks used by migrants to cross on foot from Greece to Macedonia.

As many of the refugees landing in Greece have been hurrying to the northern border, desperate to cross Serbia before EU member state Hungary closes off its border with a controversial "anti-migrant" fence, Macedonia has declared a state of emergency on its southern and northern borders on Thursday and ramped up security on its border with Greece, leading to desperate scenes of crowds wrestling to board packed trains at a nearby railway station, children squeezed through open carriage windows.

Reports also said several migrants have been injured in clashes with police who have been trying to stem the rush on trains by allowing only small groups, mainly families with small children, to board. Families are often separated in the chaos. A boy in a red T-shirt frantically paced along the platform, shouting "Mama! Mama!" when he and his small curly-haired sister found themselves alone in front of the train with their parents blocked by police meters (yards) away. A woman in a black scarf sat on the pavement, desperately crying as she told the officers that her sister and brother were on the other side of the cordon.

The government said it is deploying troops as it tries to stem a surge of migrants from the Middle East, Asia and Africa. Macedonian police spokesman Ivo Kotevski said both police and the army will control the 50-kilometer (30 mile) stretch of the border in order to stop a "massive" influx of migrants coming from Greece. "This measure is being introduced for the security of (Macedonian) citizens who live in the border areas and better treatment of the migrants," he said.

Kotevski said a state of emergency had been declared on the northern and southern borders and that soldiers would be brought in to help address a crisis that is straining the capacity of cash-strapped Macedonia and Serbia. To the north, Hungary is racing to complete a fence along its 175-km border with Serbia to keep them out, threatening to create a bottleneck of tens of thousands. Macedonia appealed on Wednesday for neighbouring countries to send train carriages to address the demand. But the U.N. refugee agency urged the government to do more, saying it should allocate a site to accommodate the migrants and refugees. "Depending on how Greece uses ships to de-congest the islands, that will also temporarily increase the arrivals here," Alexandra Krause, senior protection officer at the UNHCR in the Macedonian capital, Skopje. "The (Macedonian) government needs to provide an appropriate site to be able to shelter the arrivals properly and to ensure sufficient assistance," Krause told Reuters.

EU border agency Frontex said a record high of 107,500 migrants reached the EU's borders last month. Around half of them landed in crisis-hit Greece, fleeing war and conflict in Syria and Afghanistan. Few, if any, of the migrants arriving want to remain in Greece, a country in the grip of a financial crisis. The vast majority head straight to the country's northern border with Macedonia, from where they cram onto trains and head north through Serbia and Hungary on their way to the more prosperous European north and countries. Almost 39,000 migrants, most of them Syrians, have registered as passing through Macedonia over the past month, double the number of the previous month. Macedonia says it cannot deal with the influx. The situation is not aided by a tense relationship between Macedonia and Greece, rooted in a dispute over Macedonia's name since it declared independence from socialist Yugoslavia in 1991.

In an interview with AFP, the head of the Red Cross slammed the "indifference" of governments across Europe that has allowed the continent's biggest migrant crisis since World War II, urging the world to "wake up" to the real extent of the problem. The U.N. Refugee agency (UNHCR) also said the migrant crisis is a result of Europe's failure to respond to it in a coordinated fashion.
Last Update: Aug 22, 2015 2:30 am
RELATED TOPICS