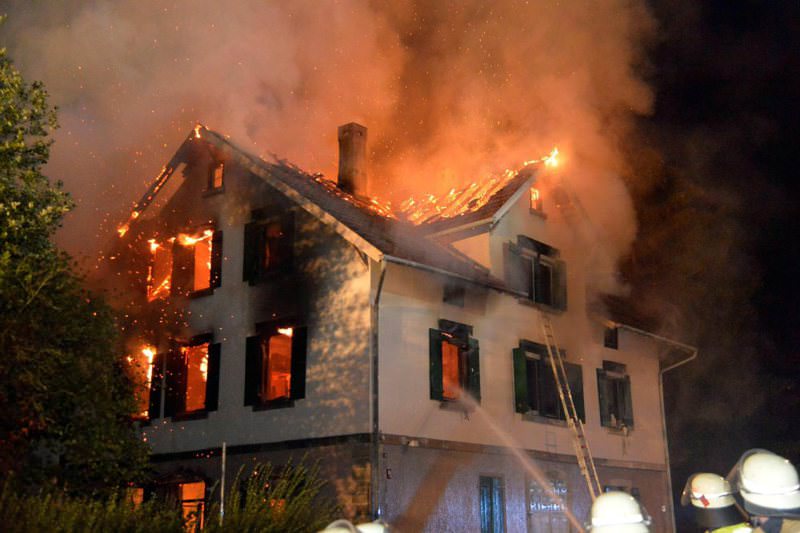 Firefighters battle flames engulfing a house that was destined as housing for migrants in Weissach im Tal, Baden-Wuerttemberg state, Germany on Aug. 24.
by Daily Sabah with Agencies Aug 25, 2015 12:00 am

Trying to cope with the influx of people fleeing violence and poverty in countries such as Syria and Iraq, Germany has criticized Europe's inaction in the crisis while it struggles with xenophobic attacks on refugee shelters

Germany's interior minister led calls on Sunday for a crackdown on right-wing militants after a second night of scuffles between protesters and police outside a refugee shelter in an east German town near Dresden. Just a day after 31 police officers were hurt in violent protests against the asylum seekers, a Reuters photographer on Saturday night saw some 200 mostly drunk militants in Heidenau throwing fireworks and bottles at police.

Some shouted "Heil Hitler." Amid fears of a recurrence, police on Sunday started to set up a security zone around the shelter. The situation remained tense on Sunday evening when police used tear gas to break up scuffles between right-wing radicals and far-left protesters. Vice Chancellor Sigmar Gabriel visited the town on Monday.

Interior Minister Thomas de Maiziere condemned the attacks. "At the same time as we see a wave of people wanting to help, we have a rise in hate, insults and violence against asylum seekers. That is obscene and unworthy of our country," de Maiziere told Bild am Sonntag newspaper. "Anyone who acts like that faces the full force of the law."

Chancellor Angela Merkel also condemned on Monday violent protests against refugees that erupted over the weekend in eastern Germany, blaming them on far-right extremists who were bent on spreading a "disgusting" message of hatred. Merkel, through her spokesman Steffen Seibert, said it was disgusting how right-wing extremists and neo-Nazis had tried to spread their message of hate near a shelter in Heidenau, where some 250 refugees arrived late on Friday. "The chancellor and the whole government condemn in the strongest manner possible the violence and the aggressive atmosphere towards foreigners there," Seibert said.

Justice Minister Heiko Maas responded to the Heidenau riot by saying there was zero tolerance for xenophobia or racism. Many politicians have warned about a rise in hostility towards foreigners and in the first half of the year alone, some 150 arson or other attacks were recorded on refugee shelters.

Some of Merkel's conservatives want to curb benefits for asylum seekers and for other EU states to take up more of the burden. De Maiziere said the EU had to agree on a list of countries of "safe origin" to make it easier to deport refugees, including nations trying to join the bloc and some African states.

As Europe struggles with an influx of migrants fleeing war in countries such as Syria and Iraq, German politicians are worried about the financial and social effects on their country, the EU's biggest recipient of refugees. Germany, which has relatively liberal asylum laws, expects the number of refugees to quadruple this year to 800,000. Chancellor Angela Merkel says it is the biggest issue the EU faces, tougher even than the Greek debt crisis. Vice Chancellor Sigmar Gabriel criticized the passiveness of other European nations in the refugee crisis. Gabriel said he thinks the migrant crisis is the 28-member European Union's most pressing issue. "I believe also that it is Europe's biggest challenge, more so than Greece and the financial crisis," he said, adding that it was an "enormous shame" that "the majority of EU members say 'This does not concern us at all.' Europe is, in some regards, in a deep sleep and is still in 'holiday mode'," he said. Germany's Minister of Interior also said Europe has failed to tackle the refugee crisis. "It's unacceptable for the European institutions to keep working at the speed they have," he told reporters after a meeting with his French counterpart in Berlin.

On Sunday, left-wing protesters clashed with neo-Nazis and police in Heidenau. Around 1,000 people had turned up in Heidenau, near Dresden, to demonstrate against the expected arrival of hundreds of refugees in a protest called by the far-right National Democratic Party. Police intervened with tear gas after some 30 protesters blocked the road while hundreds gathered outside the building due to house the refugees. "Stones, bottles and firecrackers were hurled at police," a police statement said, adding that 31 officers had been hurt, one of them seriously. Heidenau Mayor Juergen Opitz condemned the violence Sunday. "What we need here is humanity. No one is asking anyone to give anything up," he told dpa. "I am convinced, that the vast majority of residents of Heidenau will come out to help the refugees," he said. Although he noted that he had received negative comments on social media, he pointed out that it had been counterbalanced by offers of support from other residents.

Police in Bavaria said last Friday they were also investigating an arson attack on a refugee shelter in the town of Neustadt an der Waldnaab. Nobody was injured. The outbreak of violence prompted the police union to warn about right-wing attacks. "The combination of aimless politics and massive streams of refugees into Germany and Europe is the ideal feeding ground for the creation of a strong group of right-wing extremists in Germany," union head Rainer Wendt said.

Anti-immigration ideology and xenophobia have become more visible in the country as a result of the efforts of political parties like the NPD and Alternative for Germany (AFD), as well as anti-Islam and anti-immigrant initiatives like Patriotic Europeans Against the Islamization of the West (PEGIDA), which have staged anti-immigrant rallies and drawn thousands of people throughout Europe and especially in Germany. Attacks against refugees and asylum centers in Germany have increased sharply over the past year. Officials say there were some 202 such attacks in the first six months of 2015, as many as during the whole previous year. According to the UNHCR, EU countries have received an estimated total of 436,000 asylum applications in 2014 with Germany receiving the most. The country expects the number of refugees to quadruple this year to 800,000.
RELATED TOPICS