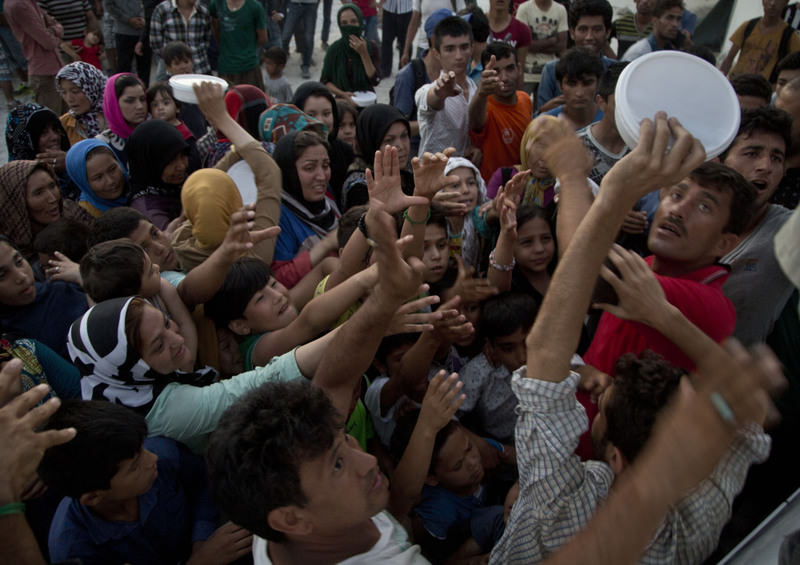 Afghan migrants push to reach for food rations at the Moria refugee camp near the town of Mytilene on the southeastern Greek island of Lesbos.
by Daily Sabah with Agencies Aug 26, 2015 12:00 am

As thousands of migrants flee war and persecution in search for a better life in Europe, Amnesty International reports the condition provided for those arriving in Greece is "dreadful."

The human rights NGO said in a statement on Monday: "Weak coordination and severe shortages in facilities and staffing are creating dreadful conditions for the hundreds of refugees and migrants arriving every day on the Greek island of Lesbos, which is seeing the highest number of arrivals in Greece. This is not just a Greek tragedy, but also a Europe-wide crisis. It is unfolding before the eyes of short-sighted European leaders who prioritize securing borders over helping survivors of conflict," Gauri van Gulik, Amnesty International's Deputy Director for Europe and Central Asia said in the statement.

At least 33,000 migrants have arrived on the Greek island of Lesbos since Aug. 1, with hundreds more arriving every day, according to Amnesty. The group called on Greece to set up more staff and better camp conditions to manage the crisis on Lesbos and other Greek islands.

The statement comes more than a week after police on the Greek island of Kos on Aug. 11, hit migrants with batons and sprayed fire extinguishers to control clashes that broke out. Some 160,000 migrants and refugees have landed on Greek shores since January, with the authorities criticized by the UN and humanitarian groups for poor preparation that has left thousands of them sleeping on the street, allegedly being abused by police and lacking access to hygiene facilities.

A U.N. human rights expert also criticized the way the countries try to cope with the huge influx of migrants, saying fences, tear gas, threats and deprivation of food, water and shelter won't keep the refugees and migrants away. Francois Crepeau, the U.N. special rapporteur on the human rights of migrants, says EU members should focus on controlling but not sealing borders, fighting anti-migrant sentiment and ensuring that migrants and asylum-seekers can move around, get jobs and integrate.

In a statement on Tuesday, Crepeau said: "Let's not pretend that what the EU and its member states are doing is working. Migration is here to stay." Many European countries have been struggling to cope with a recent wave of migration. Crepeau said EU officials should do more to counteract people-smugglers and create a massive resettlement program for refugees fleeing violence and persecution from places like Eritrea and Syria.

Meanwhile, record numbers of refugees fleeing the chaos in the Middle East and Africa keep increasing. Hungary called yesterday for more money from the European Union to handle the rising tide of migrants crossing the Balkans, as a new wave hit its southern border and further exposed the cracks in EU policy towards the worst refugee crisis since World War II. On Monday, a total of 2,093 migrants, the highest ever daily total, streamed into EU member state Hungary from Serbia on Monday, police said, just days before Hungary completes a border fence to keep out migrants. They were part of a wave of around 7,000 refugees whose journey to the European Union had been blocked last week when Macedonia declared a state of emergency and closed its borders after being overwhelmed by the huge influx of people. Government spokesman Zoltan Kovacs said yesterday that "unsustainable conditions" would develop in Budapest and other large European cities unless concerted efforts were made to establish "some kind or order or regularity" regarding the flow of migrants.

Many refugees told AFP at the Hungarian border they had passed through Serbia after traveling through Macedonia's border with Greece. "We were stopped in Macedonia for two days, the riots were terrible, police used guns and teargas, I saw an old woman beaten, her money and papers taken," said a 29-year-old IT engineer from Mosul in Iraq who left his home to escape the Islamic State of Iraq and al-Sham (ISIS) group. He asked not to be named. Hungary's conservative government announced it would build a razor-wire fence along its southern border with Serbia, which was harshly criticized by several human rights groups. The fence is one of several tough anti-migrant government measures, which also include the tightening of asylum laws, penalties for illegal border crossing, and the planned closure of permanent refugee camps.

EU border agency Frontex said a record high of 107,500 migrants reached the EU's borders last month. Around half of them landed in crisis-hit Greece, fleeing war and conflict in Syria and Afghanistan. Few, if any, of the migrants arriving want to remain in Greece, a country in the grip of a financial crisis. The vast majority head straight to the country's northern border with Macedonia, from where they cram onto trains and head north through Serbia and Hungary on their way to the more prosperous European countries.
RELATED TOPICS