At least 55 refugees found dead in boat off Libyan coast 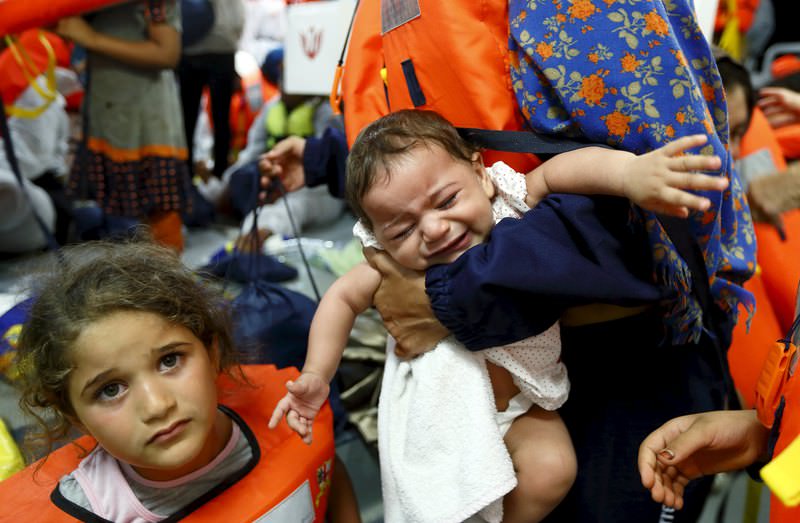 Migrant children on the Migrant Offshore Aid Station (MOAS) ship MV Phoenix wait to be transferred to the Norwegian ship Siem Pilot off the coast of Libya August 6, 2015. (REUTERS Photo)
by Aug 26, 2015 12:00 am
At least 55 dead bodies were discovered Wednesday on three overcrowded refugee boats in the Mediterranean off the coast of Libya, the Italian coastguard said.

Almost all of the victims -- 51 -- were found in the hold of a wooden boat found drifting precariously off the Libyan coast by Swedish coastguard vessel the Poseidon. Media reports said they had choked to death on gas fumes from the small motor boat.

The Italian coastguard, which coordinates rescue efforts in the area, said some 3,000 other refugees had been rescued during ten operations over the course of the day, including more than 500 people picked up by the Poseidon.

On August 15, the Italian navy discovered the bodies of 49 refugees asphyxiated in the hold of a people smuggler's boat. Survivors later testified that the victims had been locked below deck and constrained to make them stay there.

More than 2,300 refugees have died at sea this year during attempts to reach Europe, almost invariably on overcrowded boats chartered by people smugglers.

Calm weather this week appears to have encouraged the smugglers to get as many people as possible out to sea, knowing that, in most cases, they will be picked up by Italian or international boats and taken to southern Italian ports.

The Italian coastguard coordinated the rescue of nearly 5,000 people at the weekend and the latest operations will lift to more than 110,000 the number of refugees to have landed at Italian ports this year.

A further 160,000-plus have arrived in Greece, triggering a crisis for which the European Union is struggling to find a solution.