EU ministers to meet for migrant talks amid deep divisions 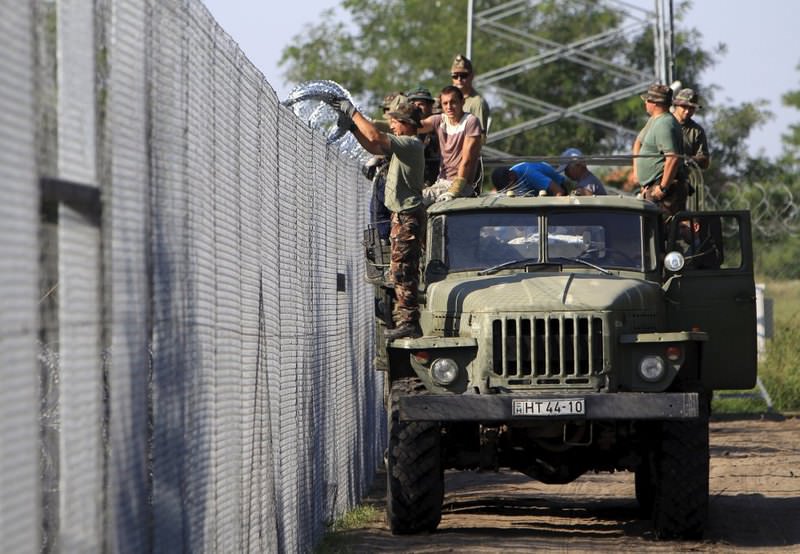 Hungarian soldiers adjust razor wire on a fence near the town of Asotthalom, Hungary.
by Daily Sabah with Agencies Sep 01, 2015 12:00 am

As refugees continue to head for Western Europe, deep divisions prevail in the EU with the French foreign minister calling the Hungarian anti-immigrant fence extremely harsh and the British interior minister blaming the EU's borderless system for the crisis

Calls continued Sunday for Europe to finally get to grips with its ever-deadlier migrant crisis after Austria's horrific truck tragedy, as people continued to pour into Hungary from Serbia despite a newly completed razor-wire barrier. European Union home affairs ministers will hold emergency talks on Sept. 14 in Brussels on the continent's escalating migration crisis, the Luxembourg government said on Sunday.

"The situation of migration phenomena outside and inside the European Union has recently taken unprecedented proportions," said the statement from Luxembourg, which holds the EU's six-month rotating presidency. "In order to assess the situation on the ground, the political actions underway and to discuss the next steps in order to strengthen the European response, the Luxembourg Minister for Immigration and Asylum Jean Asselborn decided to convene an extraordinary JHA (justice and home affairs) Council," said the statement.

The call for a meeting of the EU's 28 member states follows a joint call for the talks by Germany, France and Britain earlier in the day. Germany's Thomas de Maiziere, Britain's Theresa May and France's Bernard Cazeneuve held talks Saturday on the issue, on the sidelines of a meeting in Paris on transport security. The trio "underlined the necessity to take immediate action to deal with the challenge from the migrant influx."

They also called for reception centers to be set up urgently in Italy and Greece in order to register new arrivals, and for a common EU list of "safe countries of origin" to be established. Berlin, which is expecting to receive 800,000 asylum-seekers this year, has been pushing for such a list, arguing that it would free up resources to help those fleeing war and persecution.

Hungarian police said a fifth suspected human trafficker had been arrested over Thursday's gruesome discovery of 71 decomposing corpses in an abandoned truck on an Austrian motorway. Three children saved from another vehicle meanwhile left hospital. Pope Francis called Sunday for "effective cooperation" against "crimes that offend all humanity." The truck tragedy, plus yet another Mediterranean shipwreck claiming at least 111 lives, have served as chilling reminders of Europe's failure to cope with the influx of hundreds of thousands of migrants. After the tragic incident, Austria toughened controls at its eastern borders in an attempt to clamp down on trafficking of refugees, triggering a queue of vehicles yesterday that stretched some 20 kilometers back into Hungary.

"Europe needs to stop being moved and start moving," Italian Prime Minister Matteo Renzi said, calling again for a fairer distribution of migrants among the European Union's 28 members. Germany, France and Britain made a joint call for an urgent meeting of EU interior and justice ministers in the next two weeks to take "immediate action" and find "concrete steps." 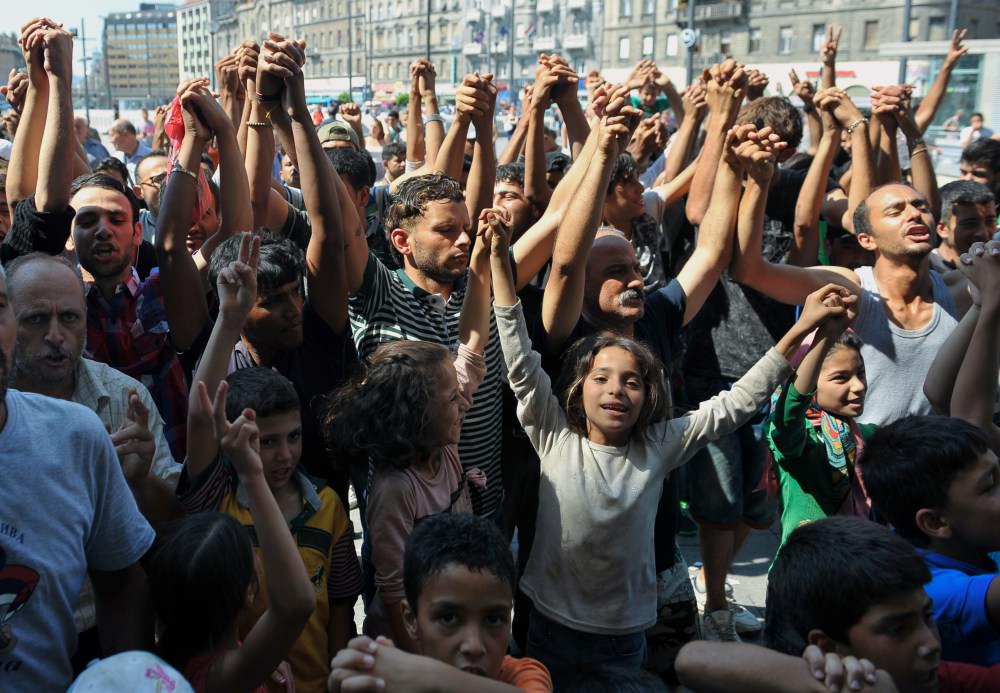 Meanwhile some countries blame each other for the inefficient response to one of the continent's biggest ever migrant crises. Yesterday, French Foreign Minister Laurent Fabius slammed as "scandalous" the attitude of certain EU members in eastern Europe in refusing to accept more migrants and pointed in particular to an anti-migrant barrier in Hungary. In an interview with French radio on Sunday, Fabius said the measure was "extremely harsh. Hungary is part of Europe, which has values, and we do not respect those values by putting up fences that we wouldn't even use for animals," Al Jazeera reported. In response, Hungarian Foreign Minister Peter Szijjarto lashed out at Fabius over his criticism. "Instead of shocking and groundless judgments, one should instead concentrate on finding common solutions for Europe," he said. On the other hand, British Interior Minister Theresa May blamed the EU's borderless system for exacerbating a migrant crisis and demanded tighter EU rules on free movement. Writing in The Sunday Times newspaper, May said the Schengen border code that eliminated systematic frontier controls across much of Europe, but which Britain is not part of, had fueled the migrant crisis. "The events of this summer have shown that the most tragic consequences of a broken European migration system have been borne by those at risk of exploitation," May wrote.

As no concrete steps have been taken yet, Libya's Red Crescent said on Sunday that another boat carrying migrants has sunk off Libya and the bodies of at least seven people have been washed up. "We were alerted that a boat had sunk and that there are bodies on the beach in Khoms," 120 kilometers east of Tripoli, Red Crescent spokesman Mohammad al-Misrati told AFP. "We don't know how many people were on board, but the coastguard has begun a rescue operation and we are preparing to retrieve at least seven bodies that have been washed up," Misrati added.

The United Nations estimates 300,000 people have fled conflict and hardship in the Middle East and Africa for a better life in Europe this year alone. Turkey, Jordan and Lebanon have already over 3 million refugees. Some 2,500 have died in the treacherous journey, most drowning in the waters of the Mediterranean after being crammed into unseaworthy boats. Last week, the United Nations' refugee agency called on Europe to band together in dealing with the ongoing migrant crisis following chaotic scenes in different countries. More capacity is required to ensure the safety of migrants on their journey to other parts of Europe, according to a statement from UNHCR.
RELATED TOPICS