Migrants protest at Budapest station, want to go to Germany 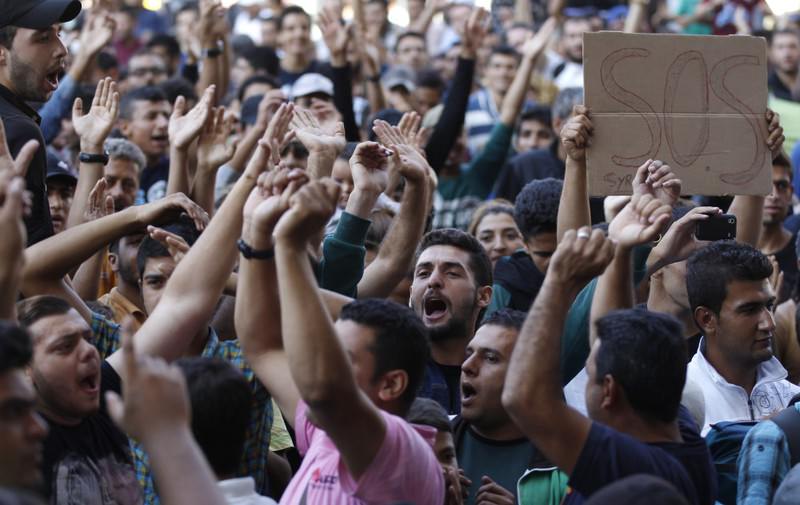 Migrants shout slogans in front of the Keleti Railway Station in Budapest, Hungary.
by Daily Sabah with Wires Sep 03, 2015 12:00 am

As more and more refugees head for Western European countries, Hungary prevented hundreds of them from going to Germany, closing the Budapest station which sparked chaos and became the latest symbol of the continent's worst crisis since World War II

Hundreds of migrants protested in front of Budapest's Keleti Railway Terminus for a second straight day yesterday, shouting "Freedom, freedom!" and demanding to be let onto trains bound for Germany from a station that has been closed to them. Chaos this week at the station in the Hungarian capital has become the latest symbol of Europe's migration crisis.

More than 2,000 migrants, including families with children, were waiting in the square at the station while Hungarians with IDs and foreigners with valid passports could board the trains. Hundreds of thousands of refugees fleeing war and economic migrants escaping poverty have been arriving in Europe, on rickety boats across the Mediterranean and over land across the Balkan peninsula. Nearly all reach the EU on its southern or eastern outskirts and then press on for the richer and more generous countries further north and west, ignoring EU rules which require them to wait for processing in the country where they first arrive.

Germany, which is prepared to take by far the greatest number, has begun accepting asylum claims from Syrian refugees regardless of where they entered the EU, even though undocumented migrants are theoretically barred from travel across the bloc. That has caused confusion for its neighbours, which have alternated this week between letting them through and blocking them. Many have come overland across the Balkans through Hungary, which allowed thousands to board trains for Germany on Monday but has since called a halt to the travel, leaving migrants camped in the summer heat in central Budapest.

Asked if Hungary would again let migrants board trains to Germany as it did on Monday, a government spokesman said that Budapest would observe European Union rules which bar travel by those without valid documents. The station has been shut to migrants since Tuesday morning. "A train ticket does not overwrite EU rules," spokesman Zoltan Kovacs added.

Despite harsh measures and failure to respond to the crisis, most people are determined to head for Western Europe. "What else can I do," Ahmad Orabi, a 25 year-old Syrian from Homs, told AFP. "I've come so far, I can't give up now."

The International Organization of Migration (IOM) has published new figures revealing the scale of Europe's biggest migrant crisis since World War II. Out of the 350,000 arrivals by sea so far this year, 234,770 alone were in Greece - more than the Europe-wide total for all of 2014. At least 2,600 died trying to reach Europe, either by drowning or suffocating in packed or unseaworthy boats, the agency said.

Stories of refugees dying in horrific conditions crammed inside lorries have piled the pressure on the EU, which has scheduled emergency talks for Sept. 14. The crisis has stoked friction in the 28-member bloc over helping to share the burden of "frontline" nations where the migrants arrive by sea or land, and about where those who are granted asylum will be settled. The influx is Europe's "greatest challenge", Spanish Prime Minister Mariano Rajoy said Tuesday during talks in Berlin with German Chancellor Angela Merkel, whose country expects to accept a record 800,000 migrants this year. Interior Minister Bernard Cazeneuve said "time is running out" to tackle the crisis at European level, while European Council President Donald Tusk said the priority for leaders must be "to prevent migrants from losing their lives trying to reach Europe". Their comments came as hundreds of Eurostar passengers were left stranded in the dark on yesterday morning after "intruders" made their way onto the tracks, in the latest disruption to the cross-Channel service by suspected migrants trying to reach Britain.

Much-flouted EU rules, known as the Dublin regulation, say refugees should be processed in the first country they reach but the human tide is so great that this system is now badly under strain. Hungary, where 50,000 migrants arrived in August, insists it cannot cope and has built a razor-wire fence along its border with Serbia, drawing criticism from France and Austria. In Slovakia, meanwhile, police stopped several hundred far-right protestors from entering the village of Gabcikovo, south of Bratislava, which is due to host around 500 migrants after a deal with their current host Austria. Another anti-migrant protest took place in the city of Trnava, northwest of the capital. The migrants' plight was brought sharply into focus last week after 71 people, including four children, were found dead in an abandoned truck on an Austrian motorway near the Hungarian border. Police in Hungary and Bulgaria have made six arrests.

Compared to Syria's neighboring countries, the U.N. refugee agency encouraged European countries to do more to share the burden of the international community in the migrant crisis. Syria's neighboring countries – Turkey, Lebanon, Jordan and Iraq – have over 3 million Syrian refugees, with Turkey only sheltering more than 1.7 million Syrians and caring for an estimated 200,000 other refugees from countries such as Iraq, Iran and Afghanistan, according to the U.N.
RELATED TOPICS