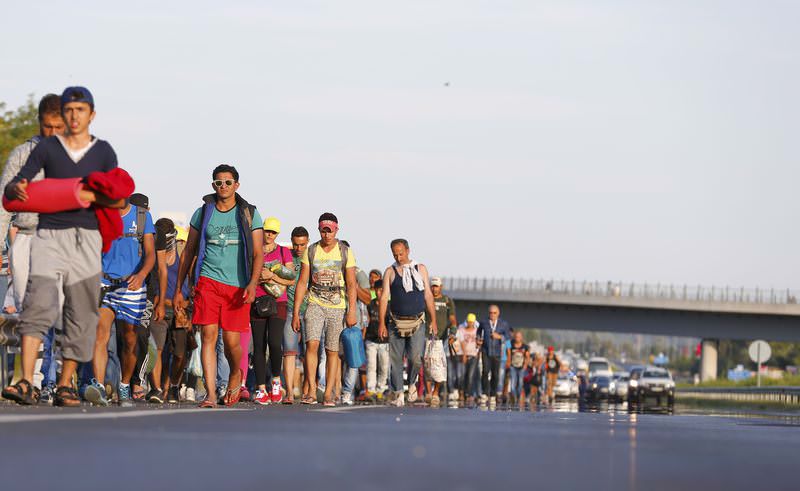 by Associated Press Sep 04, 2015 12:00 am
Hundreds of refugees who have been stuck for days at Budapest's Keleti train station gathered their belongings and began marching out of the city, vowing to make it to Austria on foot after Hungarian authorities blocked them from boarding Western-bound trains.

They carried their belongings in bags and backpacks as they snaked through Budapest in a line stretching nearly a half-mile long, hampering traffic at times, as they began the 171-kilometer journey (106-mile) to the Austrian border. By mid-afternoon they had reached the M1 motorway on the outskirts of the city.

The people, many Syrians fleeing war, want to eventually reach Germany or elsewhere in the West and are trying to avoid registering in Hungary, which is economically depressed and more likely to return them to their home countries than many Western European nations. Under European law, asylum seekers will be approved or disapproved in the countries where they are first registered.

One man 23-year-old Osama Morzar from Aleppo, Syria, was so determined not to be registered in Hungary that he removed his fingerprints with acid, holding up totally smooth finger pads to an Associated Press reporter as proof.

"The government of Hungary is very bad," said Morzar, who studied pharmacology at Aleppo's university. "The United Nations should help."

A couple from Baghdad, Mohammed and Zahara, who marched with a toddler, said they had been in a Hungarian asylum camp and got roughed up by guards because they refused to be fingerprinted. She said she has family in Belgium and is determined to seek asylum there. They would not give their last names.

Meanwhile, a standoff continued for a second day at the station in Bicske, a town northwest of Budapest that holds one of the country's five camps for asylum seekers.

Hundreds of people sat on a train there, some with tickets they had purchased to Berlin or Vienna. Although some eventually relented and registered at the asylum center, most were determined not to.

At some point, about 100 people left the train to wage a protest in front of a large number of TV cameras and journalists. Using white paint, they wrote "no camp / no Hungary / Freedom Train" on the side of the train.

"The situation is so bad. We have so many sick people on the train. We have pregnant women, no food, no water," said Adnan Shanan, a 35-year-old from Latakia, Syria, who said he was fleeing war in his homeland.

"We don't need to stay here one more day. We need to move to Munich, to anywhere else, we can't stay here. We can't wait until tomorrow. We need a decision today, now," Shanan said.

Shanan, who bears scars on his arms that he says are from the fighting in Syria, contended that authorities were denying them food and water. Associated Press reporters saw police and civilian volunteers trying to deliver both to the train and it being thrown back out the windows in view of TV cameras. On a far side of the train, however, more than 30 men could be seeing eating baguette-style bread rolls delivered by police.

At one point, a mother and two sons in the group tried to walk away from the protesters toward police, but when police surrounded them and said they'd take them to camp, peer pressure from the chanting crowd changed their minds. "No camp!" the youngest boy told officers.

Hungary's immigration office said 64 migrants who had been registered in Budapest and were taken by bus to the Bicske center ran away from police while getting off the bus in Bicske.

A Hungarian police officer who would only give his first name, Zoltan, because he wasn't authorized by his bosses to speak to the media, said police were told to be prepared to stay two to three more days and that there are no plans to force the refugees from the trains.

"I've just texted my wife to say I've no idea when I'm coming home," he told the AP. "These people don't understand, they just need to register at the camp, then they can go where they like."

In Syria, a man whose family died when a small rubber boat capsized during a desperate voyage from Turkey to Greece buried his wife and two sons in their hometown of Kobani. Photos of the lifeless body of Abdullah Kurdi's 3-year-old son after it washed up on the beach drew the world's attention to the dangers faced by those fleeing war and poverty in the Middle East, Asia and Africa.

"He only wanted to go to Europe for the sake of his children," said Suleiman Kurdi, an uncle of the grieving father. "Now that they're dead, he wants to stay here in Kobani next to them."

Across Europe, the refugee crisis is becoming more dramatic.

In Geneva, the UN refugee agency said Friday that nearly 5,600 people crossed from Greece to Macedonia a day earlier. That's roughly double the already high 2,500 to 3,000 per day in recent weeks.

"That is a dramatic number," said UNHCR spokeswoman Melissa Fleming, saying it was the highest she's heard yet.

Earlier Friday, Antonio Guterres, the head of the UN refugee agency, issued a statement urging the EU to create a "mass relocation program ... with the mandatory participation of all EU member states" for would-be recipients who clear a screening process.

He said a "very preliminary estimate" would be for the creation of at least 200,000 places to be added across the bloc.

The UN comments came a day after a round of recriminations among EU leaders. Orban has said the human wave is a German problem, but German Chancellor Angela Merkel said the obligation to protect refugees "applies not just in Germany, but in every European member."

Orban reiterated on Hungarian state radio Friday his determination to stop the refugees.

"We have to make it clear that we can't allow everyone in, because if we allow everyone in, Europe is finished," Orban went on. "If you are rich and attractive to others, you also have to be strong because if not, they will take away what you have worked for and you will be poor, too."
Last Update: Sep 04, 2015 8:10 pm
RELATED TOPICS