As standoff continues in Budapest, EU under pressure to agree to refugee quotas 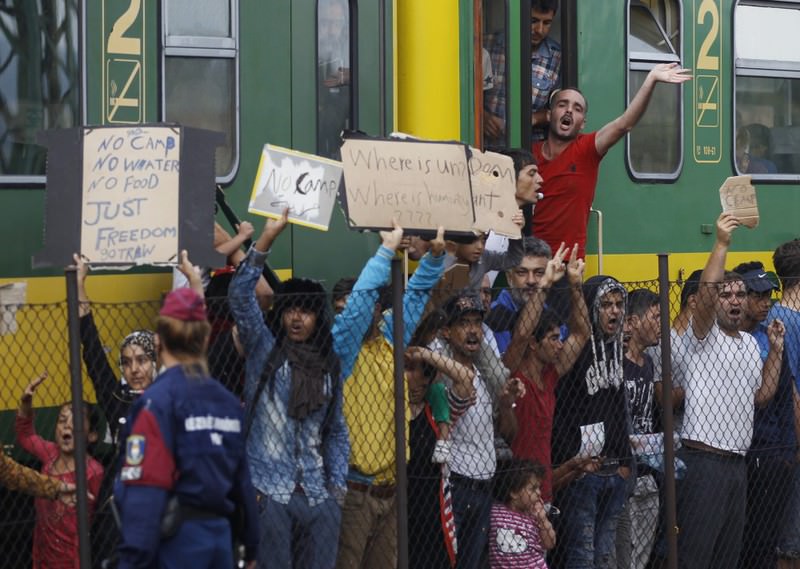 People shout slogans outside a train that was stopped in Bicske, Hungary.
by Daily Sabah with Agencies Sep 05, 2015 12:00 am

Hundreds of migrants, mostly from the Middle East, were still stranded at a Budapest train station Friday, as the head of UNHCR called on the EU to take ‘urgent and courageous measures' to deal with the crisis. The UNHCR also warned a divided EU would only benefit smugglers and traffickers

Hundreds of migrants were stranded on a train in Hungary for a second day yesterday, demanding passage to Germany in a standoff with riot police.

They spent the night on packed carriages at a railway station west of Budapest, having left the capital on Thursday morning believing they were heading for Austria, Germany and the end of a sometimes perilous journey from the Middle East, Africa and Asia. Riot police halted the train at Bicske, some 35 kilometers west of Budapest, ordering the migrants to a nearby camp that processes asylum seekers. Scuffles broke out when the migrants refused, some fleeing or throwing themselves on the tracks in the latest desperate scenes of Europe's worst migration crisis since World War II.

As morning broke, cries of "No camp, freedom!" rang out. On the side of the train, someone had written "No camp. No Hungary. Freedom train" with shaving foam as dozens of riot police looked on. They had brought food and water to the migrants, some of whom refused. Moreover, sanitary conditions risk quickly deteriorating in the late summer heat. "We don't know what's going on," said Ahmed Mahmoud, 60, who said he was a former Iraqi military officer who had lost both legs and was trying to join his daughter in Belgium. "The police told us get fingerprinted or face jail time. So, we gave our fingerprints and they told us we can go. But we can't go to the West. I just want to see my child in Belgium."

Hungary has hit out at Germany, which expects to receive 800,000 asylum seekers this year, for saying it would accept requests from Syrians regardless of where they entered the European Union, contrary to EU rules. Orban's government said this is spurring the flight, and in response, is building a fence and tightening migration rules that it says will close Hungary off to migrants as of Sept. 15. More than 140,000 have been registered entering Hungary this year, part of a huge flight of people escaping war and poverty for Europe by rickety boat across the Mediterranean Sea or by land across the Balkan Peninsula.

"The reality is that Europe is threatened by a mass inflow of people, many tens of millions of people could come to Europe," Orban told public radio in a regular Friday interview. "Now we talk about hundreds of thousands but next year we will talk about millions; there is no end to this," he said. "All of a sudden we will see that we are in a minority in our own continent."

The train had left Budapest on Thursday morning after a two-day standoff at the city's main railway station as police barred entry to some 2,000 migrants. Hungary said they must be registered, as per EU rules, but many refuse, fearing they will be sent back to Hungary if caught later in western and northern Europe. "Everyone should be prepared for this: Serbia, Macedonia, the immigrants, the human traffickers," Orban said. "We ourselves will prepare for this, and a different era will start from Sept. 15."

Meanwhile, the U.N. High Commissioner for Refugees, Antonio Guterres, yesterday called on the EU to admit up to 200,000 refugees as part of a "mass relocation program" that would be binding on EU states. "People who are found to have a valid protection claim … must then benefit from a mass relocation program, with the mandatory participation of all EU member states," Guterres said in a statement. "A very preliminary estimate would indicate a potential need to increase relocation opportunities to as many as 200,000 places," he added.

His call came ahead of a meeting later on Friday of EU foreign ministers to discuss the continent's refugee crisis, of which Syrian toddler Aylan Kurdi, whose lifeless body was found face down in the surf on a Turkish beach on Wednesday, has become a searing symbol. Referring to the pictures of the dead child, which "had stirred the hearts of the world public," Guterres said: "Europe cannot go on responding to this crisis with a piecemeal or incremental approach. No country can do it alone, and no country can refuse to do its part," he declared. He also emphasized that the EU had so far failed to find a collective common response, stressing: "Europe is facing a moment of truth. This is the time to reaffirm the values upon which it was built." His appeal tallied with a call by France and Germany for binding EU quotas to share the burden of the influx of migrants and refugees. A European source told Agence France-Presse (AFP) that European Commission President Jean-Claude Juncker would unveil a plan next week detailing the relocation of at least 120,000 more refugees. More than 300,000 people have risked their lives this year trying to cross the Mediterranean, and more than 2,600 people have died doing so.

Meanwhile, Czech police earlier this week marked arms of the migrants with numbers after they detained more than 200 people, mostly Syrians, in Breclav who arrived on trains from Hungary and Austria in Germany-bound trains, a practice reminiscent of the Holocaust. After it sparked criticism on social media, spokeswoman Katerina Rendlova said police initially gave them the numbers on a piece of paper but the migrants threw them away. Rendlova said yesterday police will use wristbands instead.
RELATED TOPICS