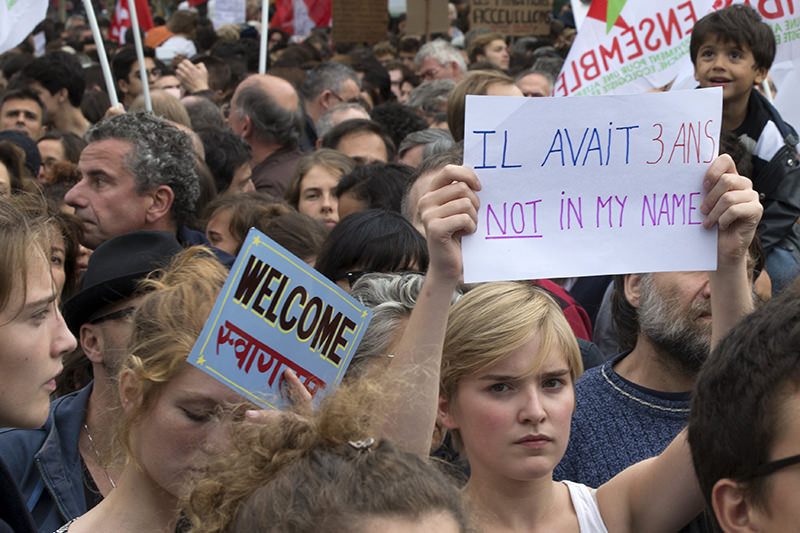 A woman holds a sign that says ,He was three; Not in my name, as she attends a demonstration in France (Reuters Photo)
by Anadolu Agency Sep 05, 2015 12:00 am
A large number of people rallied in the French capital of Paris and other cities of France on Saturday in support of refugees in response to an online citizens' appeal.

The protesters, who were according to an estimate close to 3,000 people, held a variety of banners and placards against the prevailing EU policy against refugees, some of which read: "Not in our name," "No one is Illegal," "We are all humans," "Europe Wake up," "Open the Borders," "Je Suis Refugee" (I'm a refugee) and "Je Suis Migrant" (I'm a migrant). Some also called the leaders of France, Germany, U.K. and Hungary "assassins", holding them responsible for the large number of deaths of people over the Mediterranean Sea.

Among the protesters was Marie-France Wuelleumier, a 65-year-old retired teacher, who said that she wanted to express her "solidarity with people who died as they tried to cross the Mediterranean and those who are still struggling to seek refuge in European countries."

"I'm here to say, as a French, as an European but most importantly as a human being, stop this inhumanity... We can put borders, build walls and watch seas turning to mass graves. Thousands of souls are lost," Wuelleumier added with tears in her eyes.

Belkis, a 10-year-old student, was seen holding balloons with the message "Welcome Refugees" written on it. "I'm lucky to be living in a country where it is peaceful, but other kids are living in state of war, we should help them," she said.

Jerome, 38, who came with his wife and two daughters, held a photograph of Aylan Kurdi, the 3-year-old boy whose body washed up on Turkish shores after a boat carrying him and his family sank en route to the Greek islands in the Aegean Sea.

"I'm participating in ' Not in our name' rally to say that European leaders should stop this repressive policies that led to so much human misery. They cannot carry it out on our behalf," he said.

The protest was launched by a group of citizens via a Facebook group event that said: "Beyond our political differences, our ideological differences and our religious choices, let's talk about our humanity and meet this Saturday?Let's meet to share our shame, but also our hopes."

Several associations such as SOS Racisme and representatives of left parties, socialists, communists and greens also participated in the rally.

Europe is facing its biggest refugee crisis in decades, with thousands of asylum seekers from Middle Eastern and African countries trying to reach Western Europe.

According to the UN Refugee Agency, more than 300,000 people have risked their lives to cross the Mediterranean Sea so far this year. Around 2,500 people have died or gone missing trying to reach Europe this year alone, the UN figures say.
Last Update: Sep 05, 2015 10:10 pm
RELATED TOPICS