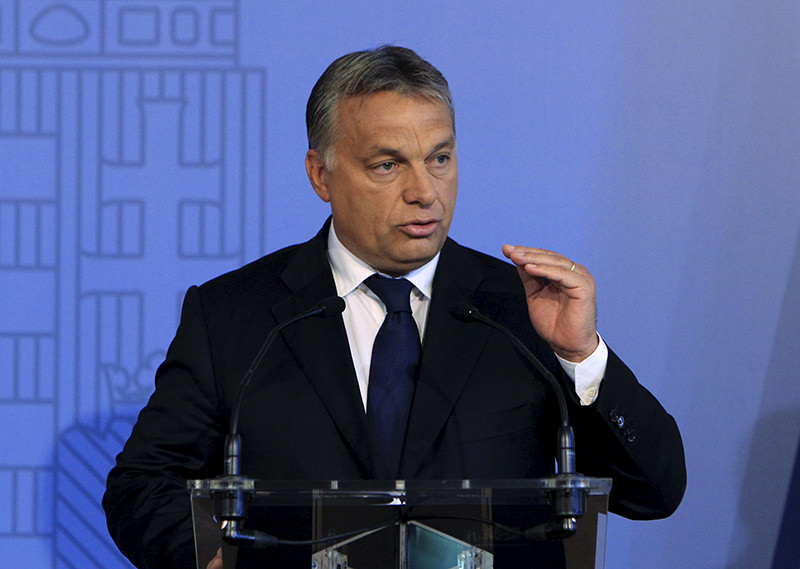 Hungarian Prime Minister Viktor Orban delivers a speech in Budapest, Hungary, September 7, 2015 (Reuters Photo)
by Compiled from Wire Services Sep 07, 2015 12:00 am
Hungarian Prime Minister Viktor Orban said on Monday that the European Union should give financial support to Turkey and other non-member countries to help them deal with the stream of migrants and refugees trying to reach Europe.

Addressing Hungarian diplomats in Budapest, the right-wing leader also said discussion of quotas for distributing migrants between members of the 28-nation bloc were premature while it was unable to defend its external frontiers.

"As long as Europe cannot protect its external borders it makes no sense to discuss the fate of those flowing in," he said, adding that he did not rule out a "fair" discussion of quotas at a later stage.

"It would make much more sense if the EU established a fund ... from which, in agreement with countries that are important to us, such as Turkey, we could provide support to deal with the problem of refugees in those countries."

He also said the stream of migrants flowing through south-eastern Europe were immigrants, attracted by the prospect of life in Germany, not refugees.

"If they want to continue on from Hungary, it's not because they are in danger, it's because they want something else," he said, adding that the migrants' target was Germany and "a German life", not physical safety.

Unchecked, the stream of refugees would place an intolerable financial burden on European countries, he said, adding that this would endanger the continent's "Christian welfare states."

The Hungarian Prime Minister had previously said that the influx of refugees into Europe threatens to 'undermine the continent's Christian roots' and governments must control their borders before they can decide how many asylum seekers they can take.

Orban also said that his country should have in place by Sept. 15 a package of regulations, including a physical barrier, to counter an influx of migrants. "We Hungarians are full of fear, people in Europe are full of fear because they see that the European leaders, among them the prime ministers, are not able to control the situation," Orban said after a meeting with European Parliament President Martin Schulz in Brussels.