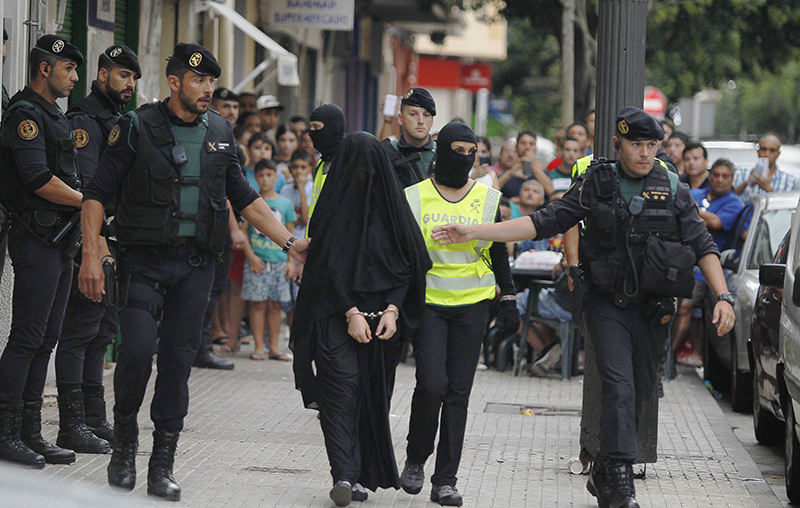 Spanish police arrest an 18-year-old Moroccan woman suspected of recruiting other women via the Internet to the terrorist group ISIS (AFP Photo)
by Compiled from Wire Services Sep 07, 2015 12:00 am
Spanish police say a 19-year-old woman has been arrested after an investigation found evidence she was recruiting combatants to fight for the ISIS terrorist group and helping them plan their travel to Syria or Iraq.

An Interior Ministry statement Monday said the woman was arrested in the northeastern city of Figueres near Spain's border with France. She was not identified and the statement did not say when she was arrested.

The statement said authorities started investigating the woman after combing through material seized from Ayoub Moutchou, a suspected Moroccan recruiter for ISIS.

Authorities noted Moutchou fled Spain in July and was arrested in August in Stuttgart, Germany. Germany handed him over to Spanish authorities last week.

The woman is accused of the "indoctrination and recruitment of people with the goal of sending them to combat zones controlled by ISIS," the ministry said.

"With this arrest, a cell that was very active in promoting the ideology of the terrorist organization ISIS, and capturing new terrorist fighters and offering logistics support, has been neutralized," the interior ministry said.

On Saturday, police arrested an 18-year-old Moroccan woman accused of preparing to travel to Syria to join the group, which has carried out numerous kidnappings and executions.

And in July, police arrested a Spanish woman on the Canary Island of Lanzarote suspected of recruiting pre-teen girls and teenagers of both sexes to send to areas controlled by the ISIS.

Spanish authorities believe the woman maintained contact with ISIS terrorists in Syria, including a facilitator who gave her orders for recruiting girls and arranging their travel to Syria.

ISIS has claimed numerous killings and kidnappings in Iraq and Syria.

More than 100 people from Spain are suspected of having joined ISIS terrorists in Iraq and Syria and authorities fear they may return to launch attacks.