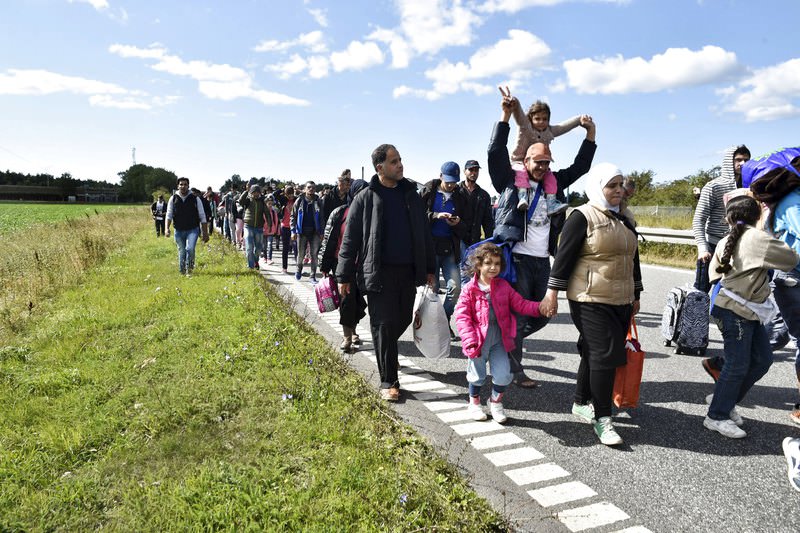 A large group of migrants, mainly from Syria, walk towards the north on a highway in Denmark September 7, 2015. (REUTERS Photo)
by Anadolu Agency Sep 08, 2015 12:00 am
Denmark placed an advert in four Lebanese newspapers Monday blatantly trying to deter refugees from travelling to the Nordic country.

The advert in English and Arabic outlined the EU member state's anti-refugee policies, including tighter regulations on social benefits and a temporary residence permit that does not allow refugees to bring their families to the country.

Placed by the Immigration Ministry, the notice said foreign nationals would only be eligible for permanent residence after five years. Those seeking permanent residence must be able to speak Danish, it warned, adding that failed asylum seekers would be quickly removed.

The adverts have led to a backlash in Denmark, with Uffe Elbaek, leader of the Alternative Party, posting on Twitter that it was "the worst timing for an ad in the history of the world" -- an apparent reference to the swelling sympathy for Syrian refugees across Europe following the publication of images of Aylan Kurdi, the three-year-old Syrian boy found drowned on a Turkish beach last week.

Martin Lidegaard, a former foreign minister, said the ads were "distasteful and bad publicity for Denmark".