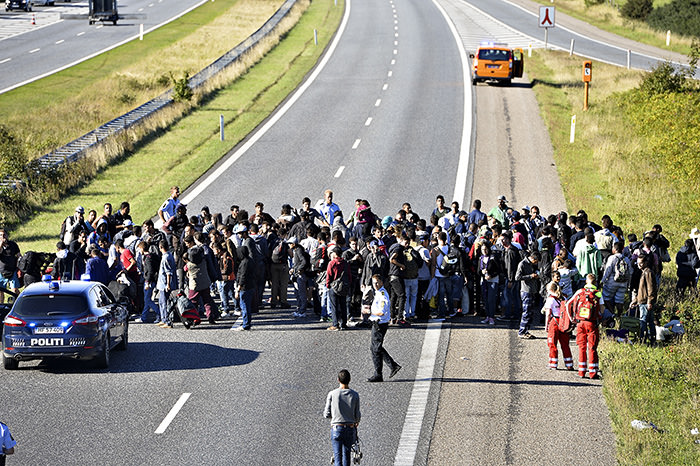 A group of refugees and migrants who were walking north stand on the highway in southern Denmark on Wednesday (AP Photo)
by Daily Sabah with Agencies Sep 10, 2015 12:00 am

As European Commission President Juncker urges member states to agree on a plan to take in 160,000 refugees, Europe wrangles over the crisis amid opposition from some eastern European member states

Denmark became the latest flashpoint Thursday in Europe's migrant crisis, with the continent bitterly split over how to cope with the vast numbers of refugees pouring across its borders.

Germany's stance toward the migrant crisis has sparked an angry backlash from its eastern neighbors, as another 3,000 migrants crossed the Austrian border from Hungary during the night, and more landed on Greece's overwhelmed Aegean islands and trudged into Macedonia. Scandinavia's busiest ferry crossing to Germany remained shut to trains after a sudden surge of migrants trying to reach Sweden on Wednesday led Denmark to suspend cross-border trains and close a motorway for several hours.

Germany is pushing hard for the binding quotas and is already facing fierce resistance, with hard-line Hungary ready to send troops to its border and Slovakian Prime Minister Robert Fico warning Wednesday his country would not bow to Berlin. "I don't want to wake up one day and have 50,000 people here about whom we know nothing," he said as European Commission chief Jean-Claude Juncker urged the continent to look to its history and ignore populist scaremongering. "Now is not the time to take fright, it is time for bold, determined action for the European Union," he told the European Parliament as he unveiled the quota plan on Wednesday to take 160,000 refugees in.

The European Parliament Thursday overwhelmingly backed plans by Juncker to ease the burden on the bloc's border states from a wave of refugees mostly coming from Syria. The lawmakers also called for an international conference bringing together the EU with the United Nations, United States and Arab states in a bid to end the most serious crisis of its kind since World War II.

With Europe strained and divided by the biggest refugee crisis it has faced since World War II, U.S. Secretary of State John Kerry said Washington was considering resettling more Syrian refugees. "We are looking hard at the number that we can specifically manage with respect to the crisis in Syria and Europe." Denmark's train operator said Thursday its rail services across the German border would resume after they were shut by a standoff between around 350 migrants and police that also closed the main motorway between the two countries for a time on Wednesday. But the ferry crossing at Rodby - one of the busiest in Scandinavia - would remain closed to trains, the authorities said.

The move came a day after hundreds of migrants refused to disembark from services arriving from Germany and register in Denmark, demanding instead to continue to Sweden, which has a more welcoming asylum policy. Around 100 later agreed to remain in Denmark while the rest were allowed to leave.

On Hungary's tense border with Serbia, scores of families were stuck in no-man's land a day after 400 desperate migrants broke through police lines at the flashpoint town of Roszke yelling "No camp!" as they scattered in all directions. Hundreds of migrants broke through police lines in Hungary near the Serbian border Wednesday for a third day running, as the army began mobilizing for a possible role in guarding the frontier.

Meanwhile, footage of a Hungarian camerawoman shown tripping and kicking migrants as they fled police near Hungary's border has sparked global outrage. A "Wall of Shame" page on Facebook featuring pictures, videos and commentaries linked to the incident involving journalist Petra Laszlo had gathered nearly 16,000 likes by Wednesday afternoon.

Two small Hungarian opposition parties filed a criminal complaint against Laszlo shortly after the footage began circulating on social media late on Tuesday. The incident occurred as hundreds of migrants broke through a police line at a collection point close to the Serbian border where thousands have been crossing each day for the past month. Laszlo was caught on film, as she appeared to deliberately trip a man sprinting with a child in his arms, and kick another running child near the border town of Roszke. Daily Sabah attempted to contact Laszlo but could not reach her, as she was unavailable.

On the Greek island of Lesbos, where up to 20,000 were stranded earlier in the week, more migrants landed on the beaches on rickety boats from Turkey, shouting with joy and kissing the sand as they arrived on dry land. "Is this the European Union?" one passenger asks anxiously as he landed on Skala Sikamineas beach. "As soon as I put my feet down I stopped feeling tired," said Feras Tahan, a 34-year-old Syrian graphic designer, unaware he was facing a 50-kilometer walk in the heat across the island to be processed by the authorities.

The migrants' plight has touched hearts around the world, spurred especially by pictures last week of three-year-old Syrian Aylan Kurdi, whose lifeless body washed up on a Turkish beach. "The wave of migration is not a one-time incident but the beginning of a real exodus, which means that we will have to deal with this problem for many years to come," EU President Donald Tusk warned on Tuesday. As the international community grappled for a solution to the crisis, Norway's Prime Minister Erna Solberg proposed hosting a donors' conference to help the millions of Syrians displaced by war.

The EU quota plans must be approved by a majority of EU states, and Berlin said it was open to a special EU refugee summit ahead of the next scheduled EU summit on Oct. 14. Juncker's proposals also include a possible revision of the EU's Dublin Treaty, under which asylum claims must be processed by the first country that refugees arrive in, and he also urged for them to be allowed to work while their claims are dealt with.

The turmoil in the Middle East and the five-year war in Syria have led many people to flee the conflict in an attempt to seek security and shelter in a more prosperous and peaceful country, such as in Europe. More than 380,000 people have arrived in Europe by sea this year, new figures from the U.N.'s refugee agency UNHCR showed Tuesday, including close to 260,000 who have landed in Greece and 121,000 in Italy. Many are fleeing war and poverty in the Middle East, particularly war-torn Syria, as well as Africa and Asia in search of a better life in Europe, with most headed for top economy Germany.
Last Update: Sep 10, 2015 4:12 pm
RELATED TOPICS