I would house a refugee family if it didn't encourage others, Hungarian PM says 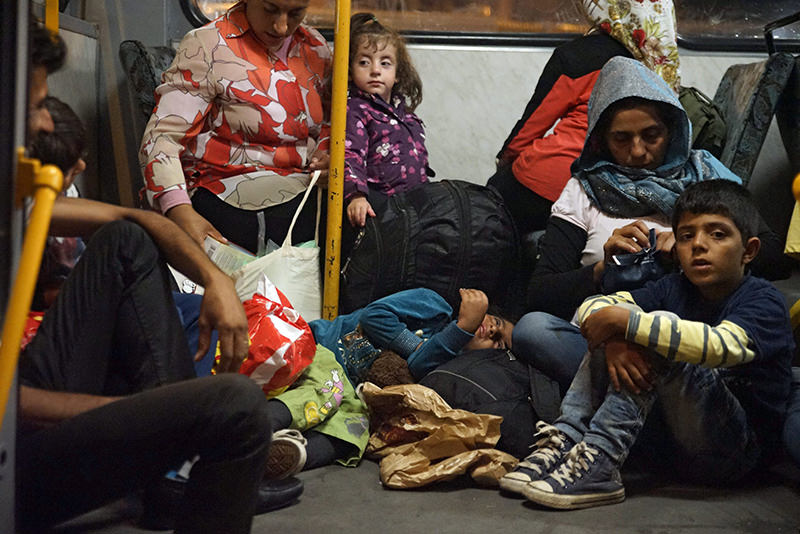 Refugees board a bus Keleti Railway Station in Budapest, Hungary, early 05 September 2015 (EPA Photo)
by Compiled from Wire Services Sep 12, 2015 12:00 am
Hungary's leader Viktor Orban, who has drawn criticism for his tough stance on migrants, told a German newspaper that he would take a refugee family into his own home if he was sure that this would not encourage others to make the journey to Europe.

Asked in an interview with Germany's mass-selling Bild whether he would put such a family up, Prime Minister Orban said: "Yes, if migrants did not take that as encouragement to come to Europe. That wouldn't be advisable at the moment."

He said his wife and children were already actively helping the refugees.

More than 170,000 migrants have crossed into Hungary from non-EU Serbia so far this year. Many try to avoid being registered in Hungary for fear of being stranded there or returned to the country later in their journey across Europe.

Orban said the European Union should provide "huge" financial support to countries neighbouring Syria to reduce the number of refugees arriving in Europe.

"I suggest that every country pays 1 percent extra into the EU budget and at the same time we reduce spending for other purposes by 1 percent," he said.

"And if more money is necessary, we'd increase the aid - until the stream of refugees dries up," he added.

Orban, a conservative populist always keen to undercut his main political rival, the far-right Jobbik party, said refugees should be sent back once Hungary closes its borders on Sept 15.

Asked where, he said: "Where they came from. These migrants are not coming to us from war zones but rather from camps in countries neighbouring Syria like Lebanon, Jordan and Turkey. They were safe there."

He said people were not coming to Europe to live in safety but rather because they wanted "a German or perhaps a Swedish life. The living conditions in Greece, Macedonia, Serbia, Hungary and Austria are not good enough for them".

He said while he personally understood the refugees' motivations, they did not have a fundamental right to a better life but only to safety and human dignity.

Orban said Brussels should increase the pressure on Greece, which shares a border with non-EU member Turkey, to protect its frontiers rather than coming up with quotas on how to distribute the refugees.

Orban had previously said that the influx of refugees into Europe threatens to undermine the continent's Christian roots and governments must control their borders before they can decide how many asylum seekers they can take.

Hungary is building a 175 kilometer-long fence along its border with Serbia to keep out an accelerating flow of migrants entering from the south.