Refugees, migrants or asylum seekers: What is the difference? 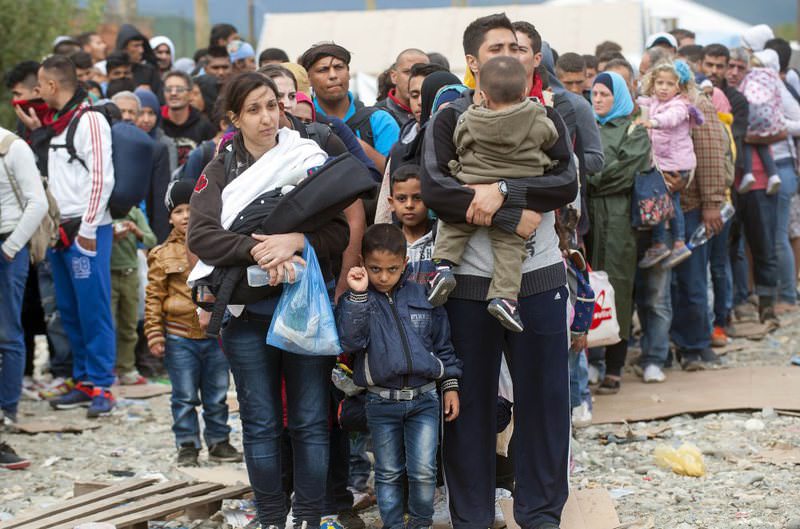 Migrants and refugees board a train after crossing the Macedonian-Greek border near Gevgelija.
by Daily Sabah with AP Sep 12, 2015 12:00 am

Images of people desperately trying to reach Europe in recent months have sparked an emotionally and politically charged debate over the words used to define them. According to the UNHCR, there is a legally crucial distinction

Day after day images of soaked and exhausted parents clutching their glassy-eyed children as they arrive on Europe's shores make their way around the world. Without a doubt they are desperate and vulnerable after a harrowing journey across the Mediterranean on rickety rafts or packed ships. But does that make them refugees from war or oppression, with a right to protection under international law, or are they better described as migrants, a term that usually refers to people simply seeking a better life in another country?

The scenes of human suffering, resilience, hope and rejection playing out in the Mediterranean have sparked an emotional and politically charged debate about what to call the hundreds of thousands of people from Africa and the Middle East who are entering Europe. Legally, there is a crucial distinction.

The U.N. refugee agency says it boils down to whether the person is being pushed or pulled: A migrant is someone who seeks better living conditions in another country; a refugee is someone who flees persecution, conflict or war and an asylum seeker is "someone who says he or she is a refugee, but whose claim has not yet been definitively evaluated." These definitions are determined by the 1951 United Nations Convention on Refugees.

According to the Oxford English Dictionary definition, a refugee is a "person who has been forced to leave their country in order to escape war, persecution or natural disaster" and a migrant is "one who moves, either temporarily or permanently, from one place, area or country of residence to another." Migration can occur for many reasons such as economic reasons, study or seeking a better life. In an article covering these terminologies, the International Business Times said even though "the word migrant used to be neutral, some believe it is now a pejorative used to spread negative connotations of migration and enforce prejudices." In August, Al-Jazeera announced that it will stop using the word migrants in its news coverage, saying it doesn't describe the "horror unfolding in the Mediterranean," where almost 2,500 people have died this year on overcrowded boats. The word "has evolved from its dictionary definitions into a tool that dehumanizes and distances, a blunt pejorative," Al-Jazeera online editor Barry Malone said. Going forward, Al-Jazeera will instead say refugee "where appropriate."

By and large, European leaders refer to the Mediterranean situation as a migrant crisis, not a refugee crisis. British Prime Minister David Cameron in July talked about "a swarm of people coming across the Mediterranean seeking a better life, wanting to come to Britain because Britain has got jobs, it's got a growing economy, it's an incredible place to live." His choice of words was widely criticized by human rights advocates as offensive and misleading.

U.N. officials said in August that crossings of the Mediterranean Sea exceeded 300,000 and a vast majority of them were fleeing war, conflict or persecution in countries including Syria, Afghanistan and Eritrea.

"It's simply inaccurate to talk about Syrian migrants when there's a war going on in Syria," said William Spindler, a spokesman for the U.N. High Commissioner for Refugees. "People who flee war deserve sympathy. So by not calling them refugees, you're depriving them of the sympathy and understanding that the European public has for refugees."

Still, European officials say using refugees as a blanket term isn't technically accurate either. Many of the West Africans arriving in Italy, for example, may not be fleeing for their lives but instead are seeking better ones in European countries with much higher standards of living.

Fredrik Beijer, legal director of Sweden's migration authority said: "From our point of view, it's simple: People who are on the move across the globe but who haven't yet applied for asylum, to us they are migrants." Once a migrant applies for asylum, he or she becomes an asylum-seeker, Beijer said. The agency uses the word refugee only when the claim has been approved and a person receives refugee status.

On the other hand, some experts note that using either term, migrant or refugee, in a blanket manner doesn't capture the situation of people who don't fit neatly into either category or who belong in both.

For example, many West Africans moved to Libya for work, but found themselves at the receiving end of violence, threats and extortion by militias, criminals and security forces as the security situation there deteriorated, said Ruben Andersson, an anthropologist at the London School of Economics. "So how do we refer to people who may have left their country to look for work, but who end up in a country where they cannot go on living because they are facing all kinds of threats and even repression?" he said.

In the end, it's important not to be blinded by terminology, he said. "We are talking about people. It astounds me how much time we spend on getting the terminology right, which obscures the fact that people are drowning on the borders of Europe."
RELATED TOPICS