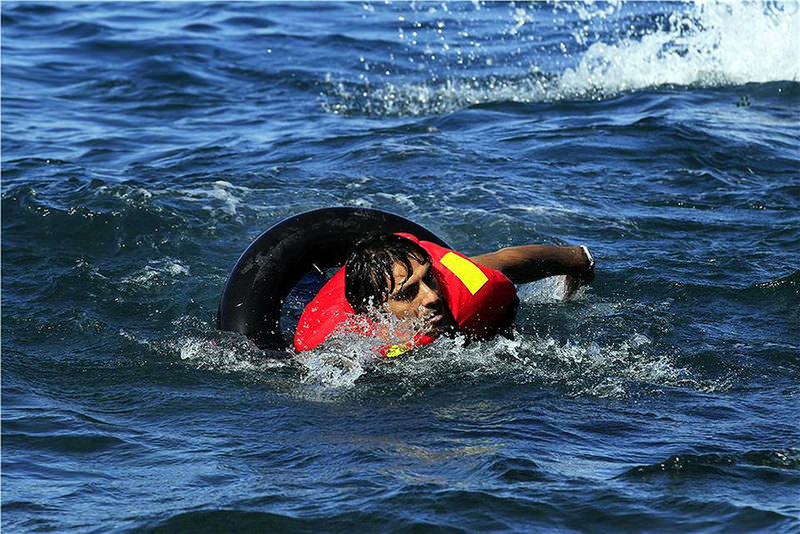 by Daily Sabah with DPA Sep 13, 2015 12:00 am
The bodies of 34 people, several of them children, were found in the waters off the Greek island of Farmakonisi Sunday, the latest tragedy in a growing catalogue of refugee drownings.

"My colleagues are finding more and more people," a coast guard officer said, suggesting the death toll from the capsized fishing vessel would rise.

The Greek coast guard rescue teams saved 68 passengers from drowning while 34 people were able to swim to Farmakonisi on their own.

According to the agency, four infants, 11 children and 10 women are among those who have drowned.

The accident occurred after the coast guard responded Saturday to the capsizing of two boats.

The refugees are believed to start their journey from Didim district of Turkey's western province of Aydın.

Four children remained missing from an incident north of the Aegean island of Samos. The coast guard was able to pluck 24 migrants from the sea in that operation.

Another 32 people were rescued when their boat went down near Lesbos. A 20-year-old refugee on that vessel has not been accounted for, state-run radio reported.

Every day thousands of refugees attempt to make the dangerous sea journey from the coast of Turkey to one of Greece's islands.

If they make it, virtually all continue their trek north through the Balkans, across Macedonia and Serbia, hoping to enter the European Union's border-free Schengen zone in Hungary and eventually ask for asylum in Germany and other wealthy Western states.