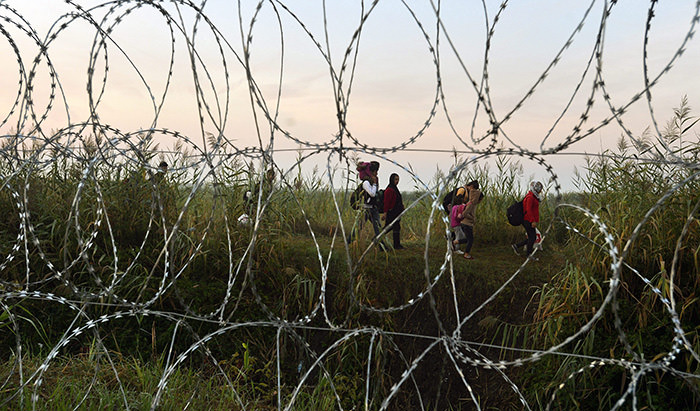 Refugees seen through razor wire fencing as they walk at the border between Serbia and Hungary, near Roszke (EPA Photo)
by Associated Press Sep 15, 2015 12:00 am
Hungary deployed a boxcar bristling with razor wire to close a key border crossing and warned of a new era of swift deportations Monday as governments across Europe debated how to share the burden of housing hundreds of thousands seeking refuge and whether the continent's hard-won policy of passport-free travel could survive the unrelenting flow of humanity.

In Brussels, ministers from the 28-nation bloc agreed to share responsibility for 40,000 people seeking refuge in overwhelmed Italy and Greece and spoke hopefully of reaching eventual agreement possibly next month, or possibly by the end of the year on which nations would take 120,000 more.

But their slow deliberations appeared disconnected from the rapidly shifting situation on the most besieged borders of Europe, where Austria, Slovakia and even the Netherlands joined Germany in reintroducing border controls for the first time in a generation in a bid to record the arrivals of thousands daily from the Middle East, Asia and Africa.

The checks, involving police on trains and on border roads, snarled traffic and slowed the speed and volume of refugees reaching Germany, which had received more than 60,000 newcomers since throwing opens its borders Sept. 5 to people trying to reach the EU heavyweight via Hungary, the Balkans and Greece. Since Sunday those borders have grown tighter again, reflecting German unease at the sheer volume and lack of commitment from EU partners to share the load.

"If we don't find a solution, then this chaos will be the result," said Foreign Minister Jean Asselborn of Luxembourg, which holds the EU presidency. Germany's decision to deploy police on borders and trains could trigger "a domino effect and then we can forget Schengen," he said, referring to the 1985 agreement that gradually removed passport checks on most European borders.

Asselborn suggested that intolerance of foreigners lay behind some countries' refusal to commit.

"Even a little country like Luxembourg is able to accept a few hundred people who are not of Christian religion, who have another skin color, and this should also work in big countries like Poland or the Czech Republic or Slovakia," Asselborn said, listing some of the countries that have rejected Germany's call for all EU members to accept minimum quotas for accepting people as refugees.

"This fear has to be overcome. For the moment, in certain countries, we're not there yet."

Hungary, a key link in the refugees chain, emphasized its determination to house as few asylum seekers as possible.

Prime Minister Viktor Orban warned that people walking into his country from non-EU member Serbia faced a new regime of swift rejection and deportation, given that Serbia today is a safe place to live.

New laws effective Tuesday also made it a criminal offense, punishable by prison or deportation, to damage Hungary's newly erected border defenses. These include a 13-foot (4-meter) fence and, at a rail line that long served as the most popular crossing point, a boxcar on the line toughened with a seven-layer coil of razor wire. Underscoring the air of heightened security, Hungary ordered low-altitude airspace on the border reserved for police surveillance helicopters, while officers on horseback patrolled parts of the nearly 110-mile (175-kilometer) border.

Orban's typically uncompromising words left open the possibility that, so long as people didn't pursue asylum claims on Hungarian soil, authorities would encourage them to travel deeper into Europe.

"We are not going to seal the border hermetically," Orban told Hungarian television in an interview that emphasized his view that the vast bulk of travelers should be treated as 'illegal immigrants' seeking a European standard of living, not war refugees fleeing life-threatening dangers.

"If someone claims to be a refugee, he will be asked if he filed an asylum request in Serbia. And if he did not file it, since Serbia is a safe country, it will be rejected," Orban said, adding that if people simply wanted safety, they could have stopped in Turkey, Greece, Macedonia, Serbia, Hungary or Austria, not overwhelmingly sought to reach Germany.

"These people are not coming for their security. They are not running for their lives," Orban said, describing their true goal as "a German life."

People who had just crossed into Hungary, hours ahead of the new get-tough border regime, offered a harrowingly different motive for their flight.

"Every day, the Islamic State group was issuing new orders. The situation was terrible," said Raed Waleed Abdullah, a 34-year-old Iraqi who fled the northern city of Mosul with his wife and three children after its takeover by the extremist movement. He said they paid the equivalent of $11,000 to Turkish smugglers to make the short sea crossing to Greece and had traveled for nine days so far. Abdullah said he sold his Mosul apartment and taxi to fund the expedition.

"I had no income, there was no electricity and they were forcing us to live according to their ways," he said, decrying ISIS's "harsh values."

"Those who refused to obey (ISIS) would be thrown from tall buildings. They are inflicting so much suffering," added his wife, Hala Khalil.

The question now is whether any EU nations will start to deport people aggressively or block their entry outright. Serbia's minister for migration, Aleksandar Vulin, said his country wouldn't accept the return of any asylum seekers once they reached Hungary.

"They are no longer our problem," Vulin said.

Large-scale deportations appear unlikely even in Hungary, where within minutes of the nationally televised closure of that border crossing with the boxcar, hundreds already had walked a few kilometers (miles) to a previously little-used road checkpoint, one of seven vehicular crossings with Serbia that will remain open.

There, Hungary put on an organized and pragmatic face, admitting foreigners early Tuesday in groups of 10 and 20 and escorting them to a fleet of parked buses. Soon, they were dropped at a train station. To some travelers' surprise, their destination was not a Hungarian asylum center, but a free trip to the Austrian border.

Confusion reigned among travelers, few of whom could comprehend the police's instructions in Hungarian or rudimentary English or German.

Asked where he thought the train was going, Wale Nuru Deem from Nigeria said: "Sweden." He then asked a reporter how long the journey would take.

Austria bore the brunt of the human crush Monday as Germany's new motorway checks produced long traffic tailbacks into Austria while, on Austria's border with Hungary, train deliveries of asylum seekers exceeded 10,000 near two border crossings leading to the capital, Vienna, and the southern city of Graz.

Austria has met the challenge with great organization, erecting scores of tents for shelters, supplies and first aid and scooping each new group of arrivals with buses and trains. Small groups of walkers forced police Monday to shut about 4 kilometers (2 ½ miles) of motorway linking Hungary with the border town of Nickelsdorf.

German police boarded trains in Austria and, walking from carriage to carriage, announced to passengers that if they wanted to claim asylum in Germany they would need to disembark at the first stop and board a bus for a registration center. Officers told the AP that the primary goal was to ensure that a record was created for every new arrival in Germany, not to permit people to travel rapidly through to Denmark, Sweden and other countries without leaving a paper trail. They said Germany also hoped to catch and charge human traffickers as part of the increased scrutiny.

At the German border city of Passau, one train carrying about 200 asylum seekers from Linz, Austria, was halted as police ensured that every single asylum seeker got out and boarded waiting buses. Half a dozen citizens handed out water bottles and candy.

"Baghdad is bad. Boom. Bombs," said Traqi Sabri, a 17-year-old native of the Iraq capital. He said he had traveled a week through Turkey and four days from Greece to reach Germany though, like many of those being ordered off the train, he wasn't certain what country he had reached.

Earlier, German Vice Chancellor Sigmar Gabriel raised his country's already eye-popping projection on the number of newcomers it expects to shelter this year from 800,000 to 1 million. That would be five times the EU record number it took last year, when Germany received about 40 percent of asylum seekers in Europe.

Gabriel said Germany's reintroduction of border identity and passport checks was designed to send a signal to "our European partners that Germany, even if we are prepared to provide disproportionate assistance, cannot accommodate all of the refugees alone."

The arrival of some 500,000 refugees this year most of them crossing by train, bus and foot via Greece and the Balkans or by sea from Libya to Italy's southernmost islands has taken the EU by surprise.

The talks in Brussels focused on the objections of at least four Eastern European nations that refuse to take more asylum seekers.

"We will accept the number of refugees that we can afford," said Polish Prime Minister Ewa Kopacz. "Not one more, not one less."
Last Update: Sep 15, 2015 9:32 pm
RELATED TOPICS