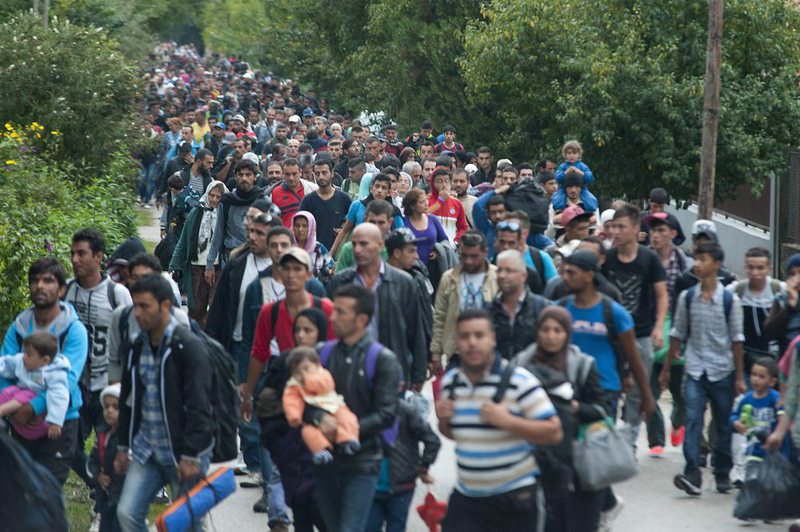 Migrants who had arrived from Roszke by train walk toward Austria in Hegyeshalom, 168 kilometers west from Budapest, Hungary.
by Daily Sabah with Agencies Sep 16, 2015 12:00 am

EU ministers fail to agree to plan to distribute 120,000 refugees in yesterday's meeting amid opposition especially from Eastern European countries. Meanwhile, border checks and measures are being tightened across the bloc

European Union interior ministers failed to reach a unanimous agreement on Monday on a plan for binding quotas to relocate 120,000 refugees and take the strain off Greece, Italy and Hungary, officials said.

With Europe's 20-year-old Schengen passport-free zone creaking under the pressure, Austria and Slovakia said they would follow economic powerhouse Germany's lead in reinstating border controls to deal with the migrant flow. Poland said it was considering similar steps while the Netherlands said it would have "more patrols" on its borders. Long traffic jams built up on the German-Austrian border and refugees were left stranded on non-EU Serbia's side of the border with Hungary, in the latest chaotic scenes from the biggest such crisis in Europe since World War II.

Yet amid fierce opposition from Eastern Europe, the EU ministers failed to reach unanimous agreement on a plan to share out 120,000 refugees and ease the burden on frontline states from the tide of people fleeing war zones such as Syria and Afghanistan.

"Yes, not everyone is on board at the moment," Luxembourger Minister of Foreign and European Affairs Jean Asselborn told a press conference in Brussels, adding, however, that there was a "large majority" in favor and they would return to the issue in October. EU Migration, Home Affairs and Citizenship Commissioner Dimitris Avramopoulos added: "For our proposal on 120,000 we did not have the agreement we wanted." The ministers were holding emergency talks to discuss plans unveiled last week by European Commission President Jean-Claude Juncker to redistribute 120,000 refugees from overstretched Greece, Italy and Hungary. The plans face fierce opposition from many Eastern European member states.

The ministers did, however, formally agree to launch a plan first proposed in May to relocate 40,000 asylum seekers from Greece and Italy over the next two years, according to quotas suggested by the commission. Avramopoulos said there had been "very heated debates at a national and European level." "The commission is determined to take action. We will need another council meeting in the coming days," he said. The quotas can be passed by a qualified majority under complex EU rules, but that would show a sign of disunity that the bloc can ill afford. EU Vice President Frans Timmermans said the "numbers [being accepted] today are much too small," and warned of the growing risk to refugees as winter draws near.

The European Union's executive, yesterday, called for an additional meeting of the 28 interior ministers before Oct. 8 when the bloc's nations are slated to find a solution on how to relocate about 120,000 refugees among individual member states.

Meanwhile, Hungarian authorities said they detained 60 migrants for attempting to illegally enter the country's southern border with Serbia by breaching a razor-wire fence. The detentions on Tuesday came as a set of new laws took effect meant to stop the huge flow of migrants through the country. According to the new legislation, it is a felony to cross or damage the 4-meter fence that the country has built along its southern border with Serbia.

The United Nations said yesterday it was "deeply disappointed" at the failure of European Union ministers to reach a final consensus on a plan to share the relocation of 120,000 refugees. "Decisive agreement is needed without further delay to address the needs, as is bold action based on solidarity from all member states," the U.N. High Commissioner for Refugees (UNHCR) said in a statement.

The International Organization for Migration (IOM) also said yesterday that it is predicting more deaths in the Aegean Sea and increased strains on Greece because of the EU's "indecision" about how to handle an influx of migrants and refugees to Europe. IOM spokesman Leonard Doyle said that decisions by some European countries to clamp down on travel across their borders might have a "domino effect" and affect countries like Greece where it is harder to stop refugees, many Syrian, from crossing from the Turkish coast. Some migrants have called an anti-human trafficking phone hotline set up by the IOM while they are treading water in the Aegean. Rights group Amnesty International also criticized the lack of an agreement, saying EU ministers had "once again dismally failed to show collective leadership and respond to the global refugee crisis."

The turmoil in the Middle East and the five-year war in Syria have led many people to flee the conflict in an attempt to seek security and shelter in more prosperous and peaceful countries, such as those in Europe. An estimated 464,876 migrants have now crossed the Mediterranean so far this year, up from 432,000 as of Friday, which already doubled the total for all of 2014, the IOM said. Some 72 migrants are believed to have died in the past few days trying to cross the water from Turkey to Greek islands, the IOM said.
RELATED TOPICS