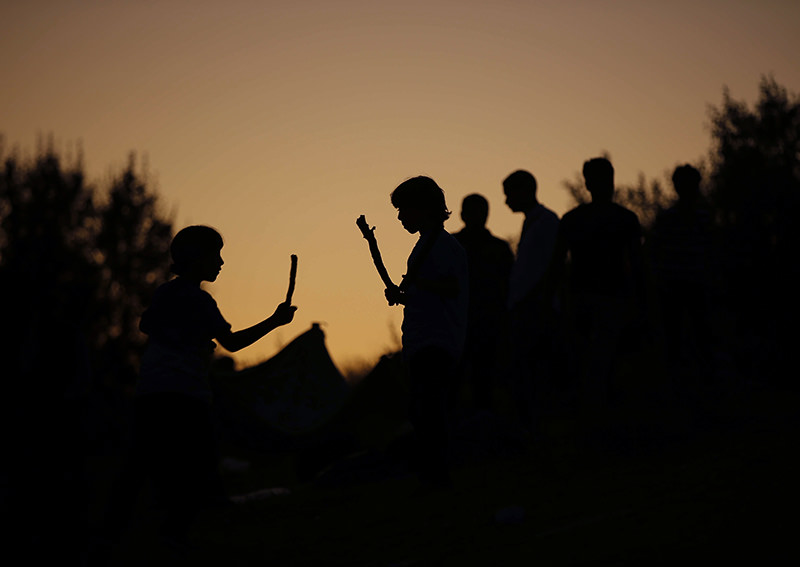 Children, mostly Syrians, trying to reach Europe play outside the Turkish city of Edirne, which borders European Union members Greece and Bulgaria (AP Photo)
by French Press Agency - AFP
Sep 17, 2015 12:00 am
Bulgaria began on Thursday deploying up to 1,000 troops to buttress its southeastern border with Turkey as hundreds of refugees remained stranded for a third day on the Turkish side, a senior official said.

"We have triggered a plan for the start of the step-by-step deployment of up to 1,000 troops along the whole Bulgarian-Turkish border (within the next week)," interior ministry chief of staff Georgy Kostov said.

It followed increased migrant pressure at the border overnight when 660 migrants attempted to cross into Bulgaria illegally, Kostov said.

The trespassers were spotted by the Bulgarian patrols, which alerted the Turkish authorities who turned them back to Turkey, he added.

EU member Bulgaria has already sent more than 1,000 extra police to its porous 260-kilometre (160-mile) Turkish border and sealed part of it with a 30-kilometre razor-wire fence that is being extended.

Defence Minister Nikolay Nenchev meanwhile told public BNR radio that the first group of over 50 soldiers was already on its way with another 160 to follow by Thursday evening.

"We have the capability to dispatch up to 1,000 people at any moment," the minister said.

"You can never predict which direction this refugee wave will take. We do not know in advance where these masses of people will pile up. If one country decides to seal its border, they go to another border. So we are prepared," Nenchev said.

Hundreds of migrants remained stranded for a third day in the northwestern Turkish city of Edirne on Thursday after police prevented them from reaching the nearby border checkpoints with Greece and Bulgaria.

Bulgaria's border police chief Antonio Angelov said Wednesday that the Turkish authorities had committed to turn migrants back to Istanbul but added his service was prepared to intercept them and transfer them over to the migration services for registration.

Bulgaria, which is not a member of the passport-free Schengen Zone and which also borders Romania, Serbia, Macedonia and Greece, has registered a total of 7,400 asylum-seekers so far this year, mainly Syrians coming illegally from Turkey.

But migrants have generally sought to bypass the country to avoid spending long months in its dilapidated refugee camps awaiting registration and status procedures, which hindered their trip to western Europe.

Interior Minister Rumyana Bachvarova told private Nova television on Thursday that the country was committed to continue to register the asylum-seekers rather than allowing them to continue their journey unhindered.