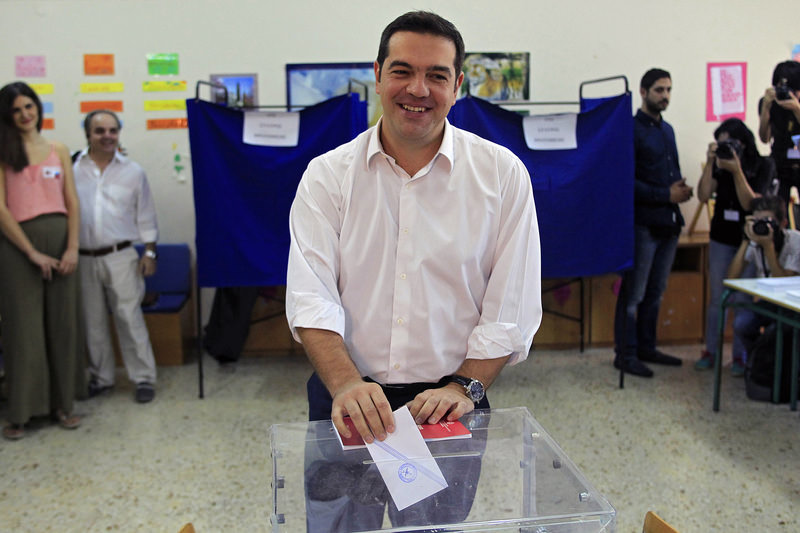 by Associated Press Sep 20, 2015 12:00 am
A jubilant Alexis Tsipras vowed to continue fighting for his country's pride and to quickly form a coalition government after his left-wing Syriza party comfortably won Greece's third national vote this year on Sunday.

The result was a resounding success for Tsipras' high-risk gamble when he resigned as prime minister last month and triggered an early election, barely seven months into his four-year term, in order to face down an internal Syriza rebellion over his policy U-turn to accept painful austerity measures in return for Greece's third international bailout.

With more than 80 percent of the vote counted, Syriza stood at 35.5 percent of the vote and 145 seats in the 300-member parliament, followed by the conservative New Democracy with 28.3 percent and 75 seats and the Nazi-inspired Golden Dawn in third place with 7 percent and 18 seats. Abstention was particularly high, at nearly 45 percent in an election-weary country with a traditionally high voter turnout.

It was the third time this year Greeks have voted, after the January election that brought Tsipras to power on an anti-bailout platform, and a July referendum he called urging Greeks to reject creditor reform proposals, which they resoundingly did shortly before Tsipras then accepted similar proposals as part of the new bailout.

Six seats shy of an absolute majority, Tsipras said he would form a government with his previous coalition partner, the right-wing Independent Greeks of Panos Kammenos, who joined him on stage to rapturous applause from dancing, cheering Syriza supporters in central Athens. The Independent Greeks were in seventh place with 3.6 percent of the vote and 10 parliamentary seats.

"I thank you from the bottom of my heart for this great victory, a clear victory, a victory of the people," Tsipras said. "I feel vindicated because the Greek people gave us a clear mandate to continue our struggle, inside and outside the country to lift our country's pride."

The 41-year-old vowed to govern for a full four-year term something few Greek governments have managed, particularly since the country became dependent on international bailouts five years ago. The country has seen six governments and four parliamentary elections since 2009.

"We will place our people's just cause at the forefront faced with asymmetrical powers and enemies more powerful than us," Tsipras said. "But we have achieved it: The flags of Greece are flying in the squares of Greece and the European capitals. Greece and the Greek people represent struggle and dignity. And together we will continue that struggle for an entire four years."

A total of eight parties were set to win parliamentary seats. The new anti-bailout Popular Unity party, formed by rebel Syriza members who objected to Tsipras' agreement to a third bailout for Greece and the stringent austerity attached to it, was falling short of the 3 percent parliamentary threshold.

"The election result appears to be forming comprehensively with Syriza and Mr. Tsipras coming first," Meimarakis said. "I congratulate him and call on him to form the government that is necessary."

The new government will have little time to waste. Creditors are expected to review progress of reforms as part of the bailout next month, while the government will also have to draft the 2016 state budget, overhaul the pension system, raise a series of taxes, including on farmers, carry out privatizations and merge social security funds.

It must also oversee a critical bank recapitalization program, without which depositors with over 100,000 euros ($113,000) in their accounts will be forced to contribute.

Jeroen Dijsselbloem, the head of the eurozone's finance ministers' meetings known as the eurogroup, congratulated Tsipras on his election victory. "Looking forward to swift formation of new government with strong mandate to continue reform process," he said in a tweet.

Sunday's result, with Syriza able to form a government with the Independent Greeks and without need to reach out to more euro-friendly centrist parties is one "that Tsipras will likely feel somewhat emboldened by," said Malcolm Barr of J.P. Morgan.

"The choice appears to have been made that when push comes to shove, Syriza will opt to keep Greece in the euro. But we note this result provides a platform upon which Syriza will continue to challenge significant parts of the (bailout) program."

Tsipras has clearly stated he disagreed with the spending cuts and tax hikes demanded by Greece's European creditors in return for the new bailout, a three-year package worth 86 billion euros ($97 billion). But he argued that without it, Greece faced bankruptcy and a potentially disastrous exit from Europe's joint currency.

His party supporters were more forgiving than the hardliners who split from his party.

"He is young. We had been voting for the others for 40 years," supporter Eva Vasilopoulou. "We are giving (him) a second chance. He is pure, and smart, and I hope that he will govern for many years."

Others said they appreciated that Tsipras had tried to get a better bailout deal for Greece, and his honesty in saying he didn't achieve what he wanted in the troubled negotiations with European creditors.

"He told ... the truth, that this is how things are: 'I have fought I did not achieve what I wanted, and I have brought this (deal). If you want, vote for me'," Syriza supporter Alexis Athanasopoulos said. "And so we voted for him."

Retiree Antonis Antonios, 75, said he was counting on Tsipras to fight for a better deal for Greeks.

"It's a great and hopeful result. We are moving forward. I am waiting for the next government to put up a fight," he said. "They are the only ones capable of a brave struggle."