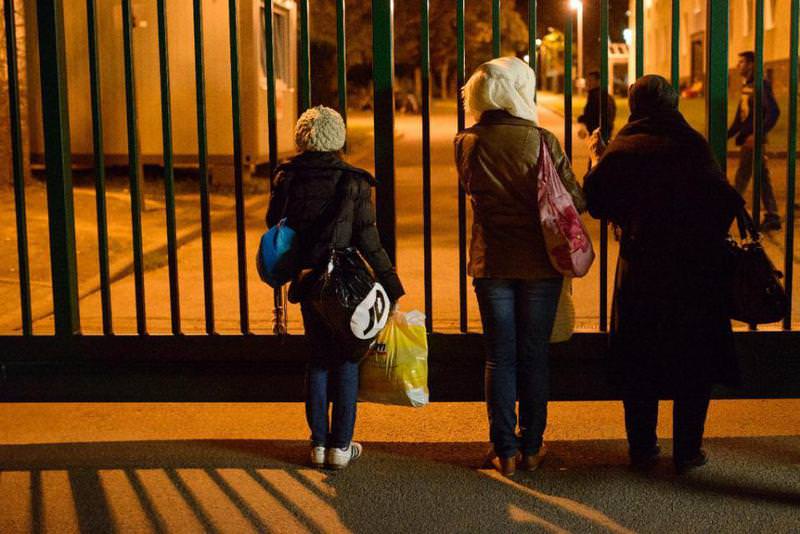 A Syrian family looks at an asylum center that has accepted them and waits to be relocated.
by Associated Press Sep 21, 2015 12:00 am

Although refugees flee to European countries to build a new life, what they face at the gates of Germany kills their hopes and dreams. The refugees who are lucky enough to reach Germany must wait in detention camps filled with hundreds of other refugees

It was pitch-dark by the time the Syrian refugee family arrived in the eastern German town that was to be their new home. As they prepared to get off the train, a drunken skinhead stumbled past with a glare that made 11-year-old Raghad huddle closer to her mom. The five members of the Habashieh family took a taxi to the asylum center assigned to them by a computer in Berlin. It was a former army barracks used by the Soviets and by the Nazis before them, surrounded by towering fences topped with barbed wire. That's when Raghad lost it and began to cry. "I'm scared, I hate this," she burst out, staring at the forbidding gates. For the Habashiehs, mother Khawla Kareem, 19-year-old daughter Reem, sons Mohammed, 17, and Yaman, 15, and little Raghad, it was the end of a draining day, the latest in a string of draining days in a terrifying journey to a new life. It has taken them from bombed-out Damascus; over the choppy Mediterranean on a rubber dinghy; across the Balkans at the mercy of human traffickers; and finally through Austria by minibus and into the promised land of Germany. Beyond the gates, young migrant men lined up in the gloom, dimly illuminated by floodlights, waiting to get plastic bags stuffed with rolls and wrapped cheese, a late dinner. A police officer with a gun in his belt stood nearby, surveying the scene.

The sinister barracks, in a depressed part of Germany that's a far cry from the vibrancy of Berlin, gave the Habashiehs their first inkling that the land of dreams may not be all that they had hoped for. The latest leg of the Habashiehs' odyssey began in the afternoon in the German capital. Having received their papers, stamped with passport photos, a new address and train tickets, they boarded a red double-decker train Wednesday that wound its way south to Chemnitz, through endless pine tree forests, past green lawns and countless wind turbines with red lights blinking into the gathering gloom. Inside the train, the Habashiehs sat together in a compartment with their three huge black suitcases, plastic bags stuffed with shoes, winter coats and toys, as well as two umbrellas, all the new belongings they have amassed since arrival in Germany.

After two weeks in Berlin, the family was being uprooted again and heading back into the unknown. Unlike Berlin, with its immigrant neighborhoods, dozens of mosques and Arabic and Turkish stores dotted over the city, Chemnitz, known as Karl-Marx-Stadt during Communist times, has only three mosques and fewer than 500 Syrians among the city's 14,000 foreign inhabitants.

The family wondered what it was getting into. "I heard from people that the place where we are going to in eastern Germany is not good," Khawla Kareem said, "and the people there do not accept foreigners." Wearing a black headscarf adorned with yellow flower patterns, the elementary school teacher said she was having second thoughts about whether it was the right decision to flee with her children to Germany. Her husband died three years ago, so it's up to her to make all the decisions. Deep down, she knows that the ongoing war back home in Syria made life too dangerous there. As unfamiliar landscapes sped by, Raghad practiced some of the German words she has picked up so far. Her mother mumbled a Muslim phrase at sunset, breaking fast with orange juice and some cold left-over French fries. The Muslim holiday of Eid al-Adha was one week away, and Khawla Kareem was fasting from dawn until dusk as some believers do in the ten days before the feast.

In the past, before Syria was ravaged by a brutal civil war, the family would sometimes slaughter a sheep for the holiday, according to tradition, but this year they probably won't be celebrating. After all, they don't even know where they will be sleeping a week from now. When she found out her family had to leave Berlin for eastern Germany, Khawla Kareem was so worried that she considered tearing apart their papers and filing a new asylum application, in hopes of getting relocated to a better place. "But then I was telling myself that I don't want to do anything illegal, that this is our fate, that we will persevere until residence will be granted," she said. "And then I can pick the best place for my children also for schools and to go to universities."

While the majority of Germans have been giving the recent floods of refugees a warm welcome, a vocal minority has been staging violent protests in front of asylum homes, especially in eastern Germany. Earlier this year, Saxony's capital of Dresden for months saw weekly rallies by tens of thousands of people protesting the perceived Islamization of the West.

Overall, Germany expects as many as a million refugees by the end of this year, with hundreds of thousands coming from Syria, Afghanistan and Iraq. While several other European countries have been trying to seal off their borders to keep out the migrants, Germany has surprised the world with its welcoming attitude toward refugees. However, the sheer volume of people, with thousands crossing the southern border into Germany every day, has cities and communities on the edge and struggling to find accommodation for the newcomers. In September alone, Germany expects more than 100,000 asylum-seekers. Another grim surprise awaited the exhausted Habashieh family at the asylum center.

When Khawla Kareem handed their papers to a guard, he ushered them into the compound through a revolving door. There, another guard told them through gestures that the center was full, and they had to be relocated again. None of the officials spoke much English or Arabic, so they couldn't find out where they were being sent. The family sat on the lawn in front of two white tents with all of their belongings, until six in the morning. Finally, a bus picked them up and drove them about an hour away, to a cavernous hall filled with hundreds of asylum seekers. Inside, black cots had been set up behind white sheets, a hopeless effort to grant some privacy. Nobody told them where in Germany they were. It was only with the help of the GPS on her smartphone that Reem, the oldest daughter, finally found out they were somewhere on the outskirts of Dresden. They still don't know how long they will have to stay there. "We have no idea what will happen next," Reem said. "It's a nightmare."
RELATED TOPICS