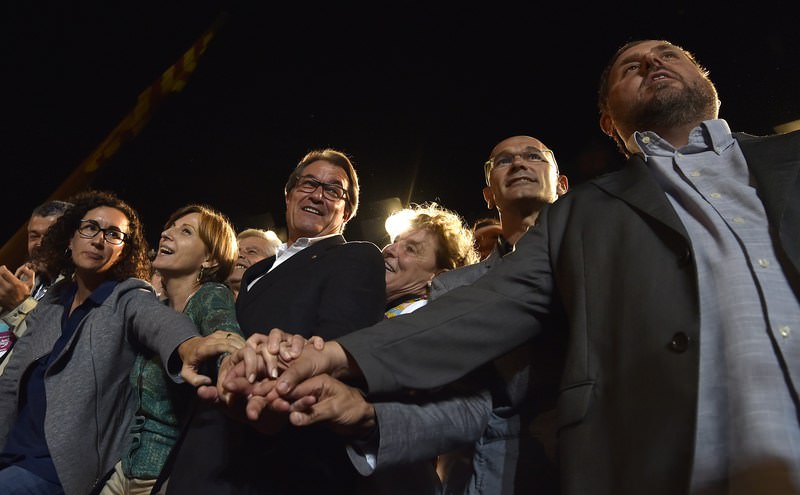 by Associated Press Sep 27, 2015 12:00 am
Catalonia leader Artur Mas claimed victory in a parliamentary election for pro-secession parties pushing for independence from Spain.

Mas said Sunday that "we won," adding that "there are two victories tonight, one for 'Yes' and another for democracy." Mas spoke to a jubilant crowd, who interrupted him with cheers and chants for "independence!"

Secessionists have long pushed for an independence referendum, but Spain's central government refused to allow it saying such a vote would be unconstitutional. So the pro-independence parties pitched the vote for regional parliamentary seats as a de facto plebiscite.

An exit poll, commissioned by Catalonia's TV3 channel, showed the "Together for Yes" group of secessionists winning 63-66 seats in the 135-member parliament. That's short of the 68 seats they needed for a majority to push forward their plan to make Catalonia independent from Spain by 2017.

With 93 percent of the vote counted, "Together for Yes" was projected to win 62 seats while the radical Popular Unity Candidacy party, or CUP, was headed for 10 seats, meaning a majority. The parties together get 47.7 percent of vote, meaning popular vote goes to anti-independence parties.

The results suggested CUP would emerge as a kingmaker in negotiations to push an independence effort forward that the central government in Madrid says would be illegal.

The central government of Prime Minister Mariano Rajoy says it will use all legal means to prevent Catalonia from breaking away, an exit European leaders have warned would include ejection from the European Union despite claims by secession supporters that a way may be found for an independent Catalonia to stay.

Spain's government has said a breakaway by Catalonia would be unconstitutional and would disrupt the fragile signs of economic recovery for the country that has endured unemployment of over 22 percent for several years.
Last Update: Sep 28, 2015 12:06 am
RELATED TOPICS